Deal Or No Deal: The Banker's Riches Online Slot 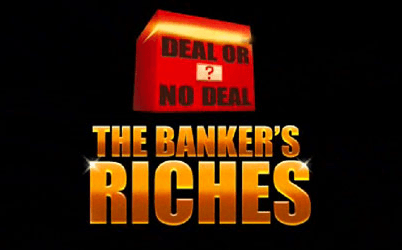 The reality show Deal Or No Deal has become a global phenomenon with variants of the show in what seems like every country. The companion slot game on the other hand is looking to gain the same level popularity as the game invokes the original show while offering a chance at winning a life-changing jackpot.

Deal Or No Deal: The Banker's Riches Online Slot Review

The reality show 'Deal Or No Deal' has become a global phenomenon with variants of the show gaining popularity in what seems like every single country on the planet. The most popular versions of the game reside in the US and UK, where the show has reached the upper echelon of fandom in those major TV markets.

The UK-based reality show is hugely popular, hosted by the familiar Noel Edmonds and features 22 boxes (26 in the USA) each containing a prize value. The show's companion slot game touts 5 reels, 20 paylines and the always enticing progressive jackpot. Invoking the thrills of the beloved UK game show, the Deal Or No Deal: The Banker's Riches slot is sure to be fun for slot lovers and reality show lovers alike.

About Deal Or No Deal: The Banker's Riches Online Slot Game

The reality show begins with you choosing a single box that will remain sealed until the finish with the goal being to select the grand prize box. After you select your box, there are a number of rounds in which you reveal the contents of the remaining boxes by selecting them one at a time.

Following each round you will receive an offer from 'The Banker'. You can either choose to accept the deal, or turn it down and play on. It’s a risky business, but the longer you wait, the bigger the potential rewards. Unfortunately, the game show does differ a bit in terms of gameplay from the slot game.

Powered by Endemol Games, the slot is designed to function like most online slot games so the similarities between the reality show and the slot gameplay are somewhat obvious but the graphics used, the sounds tracks played and bonuses provided all do their best to capture the reality show's presence for the slot players to enjoy.

Also worth noting, the Deal Or No Deal: The Banker's Riches slot game isn't the only online gambling offering the brand supports. The three principal online versions of Deal or No Deal are a slot game, a scratch card, and an instant win game. What these lack in the TV show feel, they make up for by not having Noel Edmonds (LOL) and by the speed, variety of gameplay, and overall quality.

The slot has 5 reels, 20 paylines, and is connected to a massive progressive jackpot, meaning all players enjoying a spin on the game are contributing the jackpot building with each spin. You will have to bet the max to stand a chance of landing the jackpot, though, so don't expect to hit it big betting schillings.

The game has stakes from £.01 to £100 so is considered by many to be low variance. It also features a wealth of bonuses including wild, scatter and multiplier bonuses. The Reel Banker Bonus and The Banker's Best Offer Bonus are the two most associated with the game and for good reason; these two bonuses tout consecutive free spins as well as up to 20 times your bet, among other generous promotions.