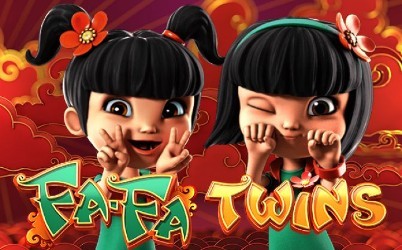 One of BetSoft's most recognizable slot machines, the Fa Fa Twins slot has been a popular game ever since its release. Like a lot of Betsoft slot games, this is a medium-variance slot game with a huge RTP (95.3%). Get all the details on the bonuses, prizes, and wagering limits of the slot when you read our in-depth Fa Fa Twins review before checking it out at one of our recommended online slots sites. 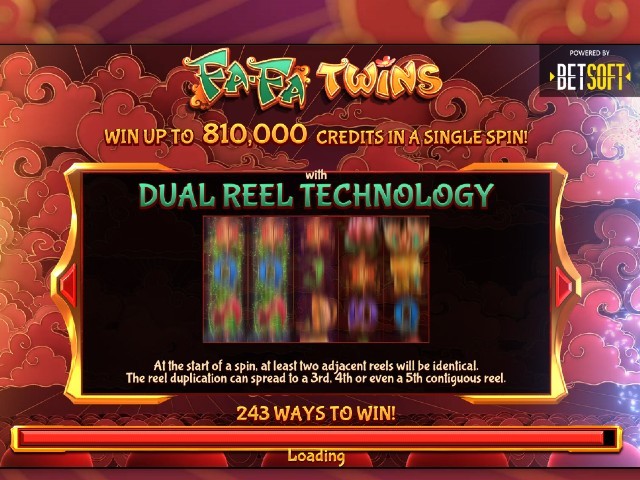 Designed for those that like their games with a pan-Asian flare, this 243-ways slot features dazzling representations of China-inspired symbols and a cute original story that revolves around two acrobat twins. And not only can it attract you with its superb looks but it also has some very tempting payouts to offer to you when played for real money – up to a huge 810,000 coins per spin!

No matter what type of device you want to play with, Fa Fa Twins will still be available to you, just like most of BetSoft's slot games. Other than symbols that pay considerably high prizes, this slot is also equipped with Betsoft's classic double-up game but also a special reel duplication feature which can lead any punter to some really big payouts.

If you haven't played slot games online before, don't worry, because Fa Fa Twins is very straightforward to play. That said, it might not be the game for you if you're looking for free spins. Before you start your session, you just have to use the clear controls on the left side of your screen to select the value of your coins and choose your preferred bet level multiplier. Both of these controls can help you adjust the size of your total stake to bet anywhere from 0.25 credits to 125 credits per spin.

Once you start playing, you'll be able to collect payouts on the screen with a total of 11 symbols which are split into two groups of standard and high-paying icons. All of the prizes listed in the paytable are represented in coins and all of them can increase when you play with a higher bet level. At the minimum bet level multiplier, the slot gives you payouts of 3-1,000 coins, while the highest bet level gives you much better returns that range between 15 and 5,000 coins per sequence. And thanks to the unusual mechanics, you won't need any paylines to trigger such prizes but you can combine your symbols in up to 243 different ways in order to get paid!

If you want to play on the move, you can also find a compact version of the slot machine that you can enjoy on any Android or iOS phone and tablet. Naturally, due to the smaller screen size of most mobile devices, Fa Fa Twins on mobile features a different set of controls. Your spin controls are given to you directly on your screen but all your betting and Auto Play buttons have to be found inside the menu that's sitting in your top-left corner.

Thanks to the slot's special mechanics, you won't have to mind any paylines when playing. To win a prize, you will only need to collect a sequence of at least three identical symbols across three or more contiguous reels, beginning with the first reel on your left. It makes no difference where your matching symbols end up on a column as long as they are found on different adjacent reels.

To help you trigger better prizes, the slot gives you a bonus wild symbol which appears on reels two-five to substitute for all icons in the paytable. The game also has a special reel duplication feature which can help you form bigger and better-paying symbol sequences. This twin reels feature ensures that you get at least two identical reels on your screen at the start of every spin to help you form a winning sequence more easily. Most of the time, you'll get only two duplicated reels but the slot can also create three, four, and even five reels of the same symbols randomly.

And finally, you also have the double-up game in Fa Fa Twins which will allow you to double your payouts for several times in a row. This game can be played only after a payout has been triggered by pressing the special "Double Up" button. In it, you'll be given a choice between gambling your full prize or 50% of it on a coin toss. Choose heads or tails to double your staked money or lose it if you make a wrong guess.

Fa Fa Twins is another simple slot from BetSoft that offers medium-volatility gameplay and a broad range of betting limits. If you have a taste for old-school slot games, Fa Fa Twins will be a good alternative when you want a casino game that offers just as simple features but even better payout opportunities. The balanced volatility of the slot certainly offers any punter a chance to reap both small payouts and huge wins of up to 810,000 coins when playing for real money. However, the increased hit rate brought on by the reel duplication feature hints that getting to prizes that are as big will likely require plenty of patience.

For players who enjoy playing high-volatility slot games that offer bigger payouts, BetSoft also has a couple of great options to offer to you. Take a spin on the Great 88 if you want another Asian-themed slot with smaller limits and more volatile payouts, or go for the vampire-inspired Blood Eternal slot machine to enjoy free spins bonuses and prizes that go up to 965,620 coins per round. Find even more great slot machines when you head down to some of the top online casinos on our website and enjoy some lucrative bonuses once you sign up for a player account.