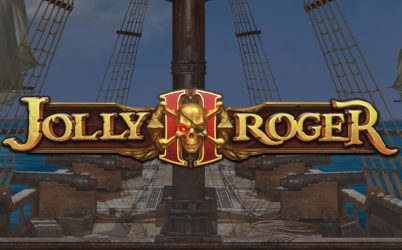 Jolly Roger 2, as its name implies, is a sequel to Play'n Go’s hit title Jolly Roger. If you’ve played the original, you know that you’re about to embark on a pirate ship and you’re about to go search for long-lost treasures at the sea. The pirate theme may sound exciting, but what will provide you with the thrill is the action-packed gameplay in this slot. With its medium volatility, the average 96.20% RTP, convenient betting range and all the features involved, Jolly Roger 2 is both fun and rewarding. Ready to discover more about it? 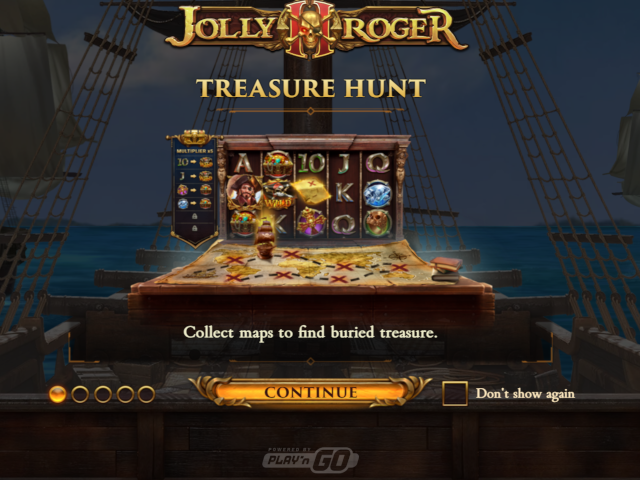 Play’n GO has created a sequel to its popular Jolly Roger slot, which thanks to its pirate theme and awesome payout potential, had attracted a huge fan base. Jolly Roger 2 is an improved version of the original, boosted with more features and even better rewards at the best online casinos.

Rated 6 out of 10 in terms of volatility, this medium-volatile slot is suited for any slots player. The fact that it is packed with features like Sea Compass, Bonus Quest with four different quests and the regular Multipliers, Wilds and Scatters, only makes it more appealing, but the fact that it can deliver a 5,000x the stake prize should you play it for real money is what would intrigue you most. If you’re ready to hop on the quest, continue reading our Jolly Roger 2 review.

Jolly Roger 2, just like all the games by Play’n GO is in HTML5 format, therefore, it can be played across many devices. Whether you want to play it on a smartphone, tablet or a desktop device, you can do so, since the slot is playable across all Android and iOS devices at the best mobile casinos.

When you load it on your preferred device, you will see the transparent reels that are set on a pirate ship. Behind them, you will see the vast sea, along with other ships floating on the water. Below the reels, you’ll see the settings. On the left, you’ll see the “i” button, where the paytable is. Click on it, and you’ll see that the symbols. The low-paying ones are the playing card Royals from 10 through A. The high-paying ones are the pirate treasures, a Ring, a Golden Cross, a Diamond and a Jewelry Box. The Wild is the Pirate Flag which is also the highest-paying symbol, giving you a payout of 10x the stake. It is also the symbol that substitutes for all regular symbols in the creation of winning combos. The Scatter is Red Roger himself, the pirate, which will help you trigger the bonus features.

Moving on horizontally to the right, you will see the balance display, followed by the bet configuration field where you can set a bet from 0.20 to 100 credits. Finally, you’ll see the big green Spin button and the gold Autospin button, where you can set up to 100 autospins for the bet level of your preference.

During the base game and the Free Spins, the Sea Compass feature can be activated on any spin. It will award a random Multiplier with a value of 2x, 3x, 5x, 8x, or 10x. The Scatter which can appear on reels 1, 3 and 5, triggers the Bonus Quest mini-feature. Once you trigger it, you will be invited by Red Roger to choose the quest you want to go on. You’ll get several rolled-up scrolls, and by matching three of them, you’ll trigger one out of four features.

Bottle of Rum – Pick from 5 bottles of rum, and if the bottle uncorks, it will award Stacked Wilds on the reel and let you pick again. The feature ends when a bottle doesn’t uncork.

Freebooter Spins – Fight the armadas of the Netherlands, Portugal or England or pillage a Merchant Ship for a chance to win more. You’ll get three lives, and whether you’ll win or lose will depend on the reel modifier you get during the spins:

If the Merchant Ship is chosen you win automatically, but if one of the three others is chosen, the battle will begin. Pirate vs. Armada symbols will fight, and the side with the most symbols will win. If the Armadas win you lose a life.

Instant Prize – An award of 2x, 10 or 15x, or 20x the stake will be given to you. Treasure Map Hunt – You get 10 Free Spins where you need to collect the four pieces of the treasure map to get to the treasure, uncovering a reel modifier for the remaining Free Spins (Symbol Upgrade or Sea Compass). You get more Free Spins each time you complete a treasure map, the first six times 2 additional Free Spins, while on the seventh time 5 extra Free Spins.

Considering it is a medium volatile slot with an awesome RTP of 96.20%, Jolly Roger 2 is a really rewarding slot. Features are triggered easily, thanks to the hit rate, and they take you to the most massive prizes. The overall payout potential is 5,000x the stake. Therefore, should you play it with the max bet of 100 credits, you could win an astounding prize of 500,000 credits. The features are fun, but they also guarantee a win each time you trigger them. So, getting to this max payout would not be as difficult as you may believe it would.

As you can see, Jolly Roger 2 is an absolutely incredible slot, both visually and payout-wise. You will greatly enjoy all the features involved, as there’ll always be action on the reels. Just like Annihilator, the slot offers a 5,000x the stake and can provide you with a lot of fun thanks to all the features it has on offer. So, make sure you claim your Jolly Roger 2 bonus at one of our recommended online casinos and go on the quest for the best treasures.