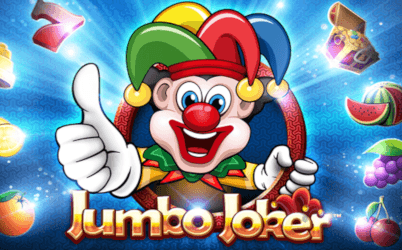 Bringing a fast-paced retro slot experience to the world of online casinos is the new Jumbo Joker slot from Betsoft. If a 95% RTP isn't enough to get you interested, the unique gameplay and bonus features will be. To get more information about the game's prizes, limits, and features, read our in-depth guide below before checking the game out at one of our recommended online slots sites. 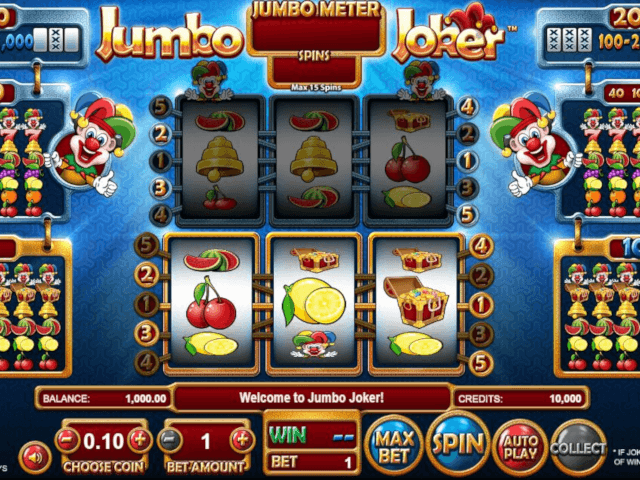 Designed just like the old fruity machines of days back, this classic online slot will give you 3-reels and 5 paylines full of various fruit icons that can take you to you to some solid cash prizes of up to 32,000 coins when playing for real money. And unlike any old slot machine, Jumbo Joker can also be enjoyed on both computers and mobile devices.

The main appeal of this classic casino game is in its features, which perfectly replicate the operation of old retro slot machines. As you play along, you'll get a chance to increase any prize you want by progressing up to three different paytables, each offering a different set of payouts, just like in classic fruity slots.

This online slot is a great choice even for complete beginners as it is not just easy but also really cheap to play. To start playing, you will first need to choose the value of your coins and then decide whether you want to bet one or ten coins per spin. With only one coin per round and the lowest coin size, you can play for as low as 0.01 credits, which is common on Betsoft slots. However, even if you want to invest all that you can, you'll still end up with an affordable max bet of only 10 credits per round.

There are only 5 paylines in the slot and all of them are clearly visible on the reels at all times, with the slot showing you both the number and direction of its paylines. While you play, you'll be able to collect a wide range of payouts, depending on your initial bet but also how willing you are to risk your money. With a single coin per spin, the payouts start at 10 coins and they go up to 200 coins. But if you invest 10 coins per round while playing for real cash, you'll get better payouts of 20-400 coins per sequence, and that's only with the base prizes. Use your wins to climb up this slot's unusual progressive paytables, and you'll get a shot at winning payouts of up to 10,000 coins per round.

For players who like playing casino games on the move, there's also an optimized version of Jumbo Joker that can be enjoyed on all iOS or Android devices. The playing experience is practically the same when you switch to a mobile device, except that you won't see all four paytables at once due to the limited amount of space. Set up your bet through the menu on your top-left and then just press the spin control to start winning real prizes on the go.

Getting paid in Jumbo Joker is really simple – all you need is to collect three matching symbols on a payline, from right to left. When you start, you'll only have six symbols to collect which offer the slot's base prizes. The most valuable symbols during the base game are the joker and the treasure boxes, which can pay up to 2,000 coins for a three-of-a-kind, depending on your bet level. The only way to win better payouts is to risk your wins to climb up the jumbo meter and unlock some of the special paytables.

The jumbo meter is unlocked with a payout of at least 20 coins. Once such a payout is won, you can either press the "collect" button to add the money to your bankroll or spend your winning to play the second 3-reels game that sits over the base game. At this bonus slot, you can play with four different bonus paytables, depending on how many coins you've won during the previous round.

The first bonus paytable can be unlocked with 20 coins and the second with double that amount. Both of the bonus tables offer more symbols and bigger payouts than the base game, with the difference being that the second bonus table gives better prizes for the lower-paying icons. No matter which table you play, any money you collect with the bonus game can be either cashed out to exit the feature or it can be used to keep playing until you hit a bigger prize. As an added plus, the slot also offers two bonus payouts for each paytable that can be triggered by collecting a specific combination of joker symbols.

Jumbo Joker by BetSoft is a slot machine that will mostly speak to beginner players or more experienced players who like classic slot games. With nothing but a simple progressive bonus game, this slot may not look like much but it can pay up to 32,000 coins while playing for real cash. And like all medium volatility slots, Jumbo Joker will give you balanced payouts that can be both small and big, although any huge wins will probably be harder to collect due to the game's higher hit rate.

For those who like classic slots but would rather play some riskier high-variance games, we propose that you try some of Microgaming's retro slot machines. The classic Break Da Bank slot is one of the most popular 3-reels slot machines online as it offers high-volatility gameplay and prizes up to 12,000 coins. The newer Diamond Empire from Microgaming partner Triple Edge is an even better choice, especially if you want a modern and volatile 3-reels slot with up to 15 paylines and additional bonus games. Check out some of our best online casinos to enjoy these and even more classic games which can be played for real money.