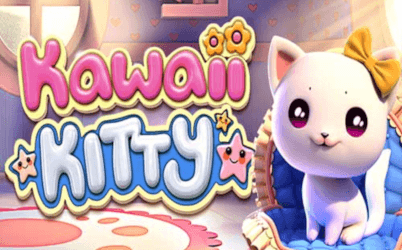 Prepare to experience a cuteness overload and bag some solid amounts of cash as you sit down to play the new Kawaii Kitty slot from BetSoft. Featuring pastel colours, soft upbeat music, and cute symbols of cat toys and food designed in the Japanese" kawaii" style, this slot was designed mostly for casual players who are looking for low-volatility games. Get all the information about the bonuses, payouts, and betting limits of the game when you read our full review below. 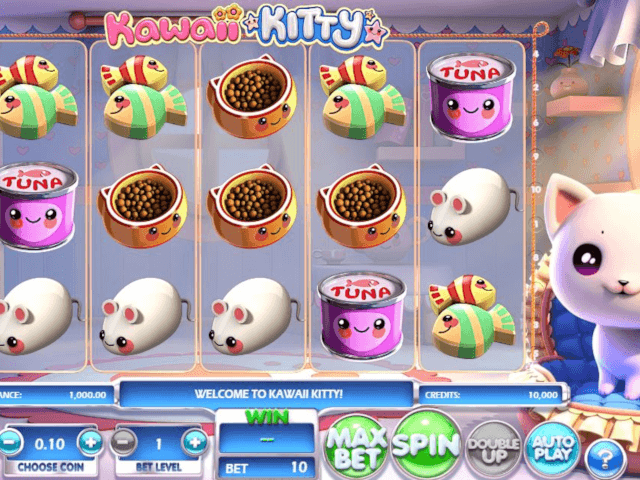 With 5 reels, only 10 fixed paylines, and a small set of features, Kawaii Kitty may not seem like an exhilarating slot machine but it can still pay up to 50,000 coins per spin when played for real cash.

Offering payouts in both ways and extra features like expanding wilds, respins, and a gamble function, Kawaii Kitty offers all the tools you need to earn a good profit, despite looking like a children's cartoon. And like most of Betsoft's slot machines, this game was designed to work smoothly on any mobile device, allowing you to make money even on the move.

Kawaii Kitty by BetSoft is a slot that can be played easily even by inexperienced players. You start your session by using the left-side betting controls on your screen to adjust the value of your coins and select how many coins per payline you will be betting. Depending on your budget, you can play with a wide range of bets, from a stake as small as 0.10 credits to a max bet of 100 credits per spin.

With only 10 paylines on the screen, it shouldn't be hard to keep track of your winnings, especially since you can see all paylines at any time by pressing the numbers that are next to the reels. The number of symbols is likewise small, with the slot offering only seven symbols that pay money and one bonus symbol. If you bet one coin per payline, this casino game will give you prizes that vary between 5 and 250 coins per sequence. However, if you bet all 10 coins, the payouts will increase by 10x, giving you a max payout of up to 2,500 coins. And what's quite unusual is that the slot pays both ways, allowing you to enjoy a much better hit rate while playing for real money and collect double the wins you would with a left-to-right game.

If you want to play on the go, you also have a mobile version of the slot that can be played on practically any iOS or Android device at many of the best online slots sites. The mobile slot gives you the same smooth playing experience as the full version of the game but with fewer controls on your screen. Start straight away by pressing the spin button on your screen or enter the top-left menu to set up your stake and turn on the Auto Play mode.

To get paid in Kawaii Kitty, you'll need to form sequences of three or more identical symbols on a payline. Since this is a both-ways machine, your sequences can start at the leftmost reel and continue towards the rightmost one to trigger a prize but also the other way around, giving you double the five-of-a-kind wins than your regular slot game. The most profitable symbols you can collect while playing for real money are the toy mouse, cat comb, and milk carton, which pay prizes of up to 600, 1,200, and 2,500 coins, respectively.

The main bonus feature here doesn't come in the form of free spins. Instead, it is the expanding wild, which looks like two yarns joined together. Like all wilds, this symbol can stand in for every paying symbol to complete your sequences. But what is different here is that the wild can also expand over a complete reel to help you collect even better payouts. Furthermore, once a payout is collected, the wild symbol also triggers a respin during which every other reel will spin to give you a second chance at banking some money. The only downside, however, is that the wild only appears on reels two, three, and four.

If you want to earn even more, you also have a double-up game at your disposal which can be played after any payout by pressing the "Double Up" button on your screen. This side-game offers you a simple way to gamble your winnings on a coin toss. Choose where the coin will land and you can double your prize or lose it.

Due to its casual feel and simple bonuses, Kawaii Kitty can attract a diverse range of players. Like NetEnt's popular Starburst, this slot offers a simple expanding wild and a respin feature but also an extra double-up game. If you like playing traditional, simple slots, Kawaii Kitty could be a great choice when you want to advance to more modern games without losing the straightforward gameplay. Thanks to the both-ways mechanics and low volatility, this slot can pay plenty of payouts when playing for real cash, up to a max win of 50,000 coins, although given the increased hit rate you'll probably see bigger wins less often than smaller regular prizes.

For slots that involve a bit more risk but also better payouts, you can also look into BetSoft's roster of mid-variance games. If you want something straightforward, you have the Angler slot which offers two bonus games, a double-up feature, and payouts that can amount to 130,000 coins. For something more stimulating, however, you have BetSoft's Giovanni's Gems slot, which likewise offers mid-volatility gameplay but also a 7x7 screen, a number of extras, and payouts over 1,000,000 coins. Make sure that you pay a visit to some of our recommended online casinos for a chance to try out these games and grab an attractive welcome bonus after you register for an account.