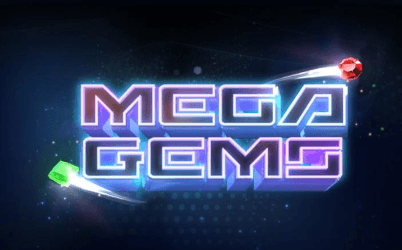 Combining the appealing features of NetEnt's mega-popular Starburst slot with a progressive jackpot prize, BetSoft's Mega Gems is a slot machine that can speak to any online slot player, no matter if they like playing on a phone, tablet, or a computer. Check out our Mega Gems slot review to learn more about the betting limits and extra features of the game before you start playing for real money! 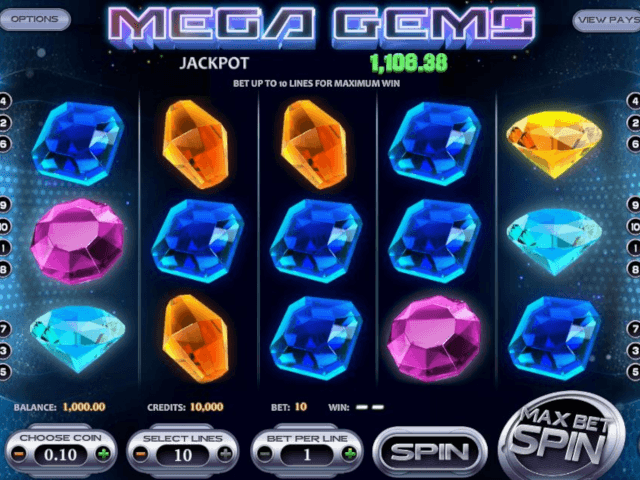 Offering 5 reels and 10 paylines full of dazzling gems that can pay really well at an online casino, this slot can produce real money prizes of up to 50,000 coins per round, and that's without any jackpot. Add a progressive prize on top of those payouts and Mega Gems becomes an even more attractive slot game.

Much like Starburst, Mega Gems features an expanding wild symbol that can trigger free respins but also special mechanics that pay prizes in either direction. But what's different with this slot is the addition of a bonus jackpot – a prize which is available to anyone who likes to spend more money per spin.

One of the best things about Mega Gems is that it can be played on any budget, even for pennies per spin. Thanks to the inclusion of three different betting controls, not only can you select the size of your coins in this game but you can also turn on/off any payline you want and even increase the number of coins you're betting on each payline. With a few clicks, you can change from a really affordable bet of only 0.01 credits - a nice feature often found in Betsoft slots - to a stake as big as 100 credits per spin.

While playing the game, you can see each payline clearly at all times by pressing the small numbers that border the reels. The slot has only seven symbols you can collect on these win lines to earn some money, all of them offering prizes in coins. By using one coin per payline while playing for real cash, the game will give you payouts of 5-250 coins per sequence. However, if you bet all ten coins your prizes will also increase 10x, giving you a max payout of 2,500 coins for a five-symbol sequence. And what's even better is that the slot pays rewards in both directions, giving you twice the payout opportunities and a higher hit rate than your regular 10 paylines slots.

For mobile players, there's an optimized version of Mega Gems that can be played on most Android phones and tablets as well as any iOS-based devices. The mobile playing experience is practically the same as when playing on a computer, only the screen isn't cluttered with so many controls. Adjust your stake by accessing the hidden menu in your top-left corner and then just use the spin button to begin playing on the move.

Once your adventure through the sci-fi world of Mega Gems starts, you'll be hopefully waiting for three, four, or five matching symbols to form a sequence on any active payline in order to get you paid. Since the game pays both ways, your sequences will be able to trigger wins in both the left-to-right direction as well as the other way around.

Out of the various symbols that appear on your screen, you'll be particularly happy to see the bonus wild symbol. This symbol can appear on reels two, three, and four where it can substitute for all paying symbols to complete your matching sequences. The wild also expands to cover any reel it appears on and it triggers a bonus respin, during which the expanded wilds will remain sticky. And if a new wild symbol is collected during the respin, the slot will keep giving you additional respins until no more new wilds appear.

As a final reward, Mega Gems also offers you a progressive jackpot prize that you can win on any given round. The prize can only be triggered when you collect three of the bonus jackpot symbols on reels two, three, and four, and only when you play with the max bet on, i.e. when betting the maximum number of 10 coins per payline.

A game for any punter, Mega Gems by BetSoft is one of those online slot machines that can be enjoyed by anyone. Not only is this slot available for cents per spin but it can also be played by high-rollers looking for a good return on their investment. If you're a fan of Vegas-style slot machines but are looking for a more modern, medium-variance game with good bonuses to offer, Mega Gems is your slot. With real money payouts of up to 50,000 coins coming in both directions and a progressive jackpot, there are more than enough profits to be made on this space-themed casino game, although its high hit ratio hints that big prizes won't come as easy or as often as smaller returns.

For punters who want simple slots that are more volatile with their prizes, we suggest that you take a look at some of Microgaming and NetEnt's online slot machines. Break Da Bank Again offers you that same classic Vegas fun but with the addition of free spins bonuses and prizes up to 375,000 coins. Another popular high-variance slot you can try is the Dead or Alive, which is one of NetEnt's most volatile slot machines that features 9 paylines, sticky wilds, as well as free spins bonus games. If you want to find even more top online slot games, make sure to pay a visit to our top online slots sites, where you can enjoy an abundance of pokies for as many happy hours as you want.