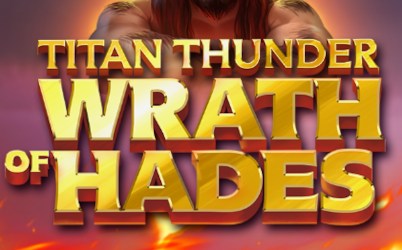 The ancient Greek god of the underworld battles against Zeus across the reels of the Titan Thunder: Wrath of Hades slot from Quickspin. It’s a 5-reel, 25-line game that’s available across desktop and mobile platforms at some of our favourite casinos. You can win a massive 15,000x your bet here, or 1,500,000.00 in cash at the highest stakes, and it’s a highly volatile slot where the average returns are 96.25%. It’s packed with features, such as a respins feature, and free games.

Play Titan Thunder: Wrath of Hades For Free!
Bookmark It For Later 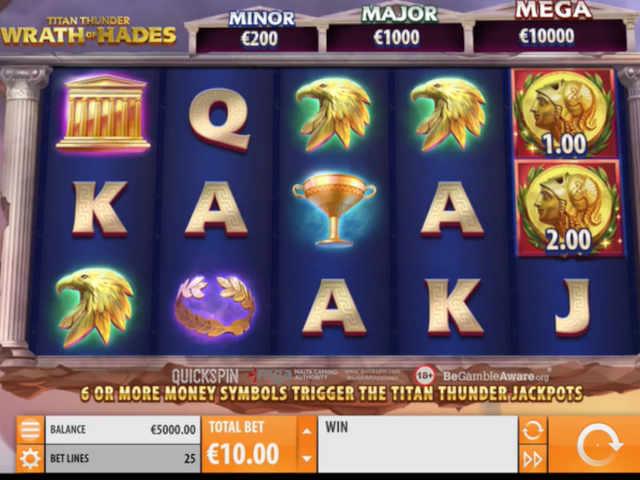 Quickspin slots games often use a similar cartoon style, and the Titan Thunder: Wrath of Hades sticks to this popular formula. Playing card symbol make up the lower value combinations, with classic Greek emblems such as a wreath, chalice, eagle, and temple paying back more when they cross any of the 25 lines.

The backdrop suits the epic nature of ancient Greek gods, with columns framing the reels and temples floating in the skies. Look above the reels, where you will see the values of Mini, Minor, and Mega jackpots, while the easy to use controls are arranged neatly below.

You’ll also see bonus symbols that open up features such as respins and free games which can retrigger over and over, with increasing multipliers each time.

How to Play the Titan Thunder: Wrath of Hades Slots Game

Casual players can stake as little as 0.25 on each spin of the reels, while high rollers can scroll through multiple options via up and down arrow tabs, to a maximum of 100.00. In some countries, a Bonus Buy option gives instant access to the free spins round for 40x the stake.

The 2 arrows in a circle button triggers an Autoplay mode, while the double arrows activate turbo spins. It’s always a good idea to check out the paytable before playing a game, and it’s accessed by the little ‘I; button the left.

If you like to play games on iOS, Android, or Windows mobiles, then you can enjoy the Titan Thunder: Wrath of Hades slot machine on any device without having to compromise on the gameplay, features, or bet options.

Zeus was the most powerful god of the ancient Greeks, and his powers here include paying the highest prizes when he crosses paylines, and also acting as a wild symbol which can substitute for others if needed.

Hades, with his glowing eyes and horns, is a bonus symbol who unlocks 8 free spins when he lands in any 3 or more places at once. The free spins will retrigger if 3 symbols of Hades appear again, only this time all wins are doubled in value. The win multiplier keeps rising by 1x for each retrigger of the free spins, with no limit.

A gold coin in at least 6 places at once will take you through to the Titan Thunder Jackpots round. These money symbols each have multiplier values from 1x to 14x and stay in place as the reels respin 3 times, with only more coins or blank positions in play. Each new coin also stays locked onto the reels, and resets the spin counter back to 3.

This carries on until no coins appear for 3 consecutive spins, or all 15 spots are filled. You win the combined values of the coins, plus the Mini or Minor jackpots if the coins displaying these appeared. On top of this, you can also win the Mega jackpot of 1,000x your stake for all 15 positions filled with money symbols.

Prizes max out at a vast 15,000x your bet, and at the highest stakes, and that’s an impressive 1,500,000.00 payout. The Titan Thunder: Wrath of Hades slots game has an average return to players percentage of 96.25%, which is slightly more than the 95% or more that we look for in new online slots.

It’s a high volatility game, so be prepared for relatively long gaps between winning spins, but subsequently high-value prizes.

Apart from the less than ideal return to players percentage, the Titan Thunder: Wrath of Hades slot machine is highly recommended. The topic is hugely popular, and the features can bring in some big rewards.

If the free games round retriggers several times over, you can pick up some of the top prizes, and once the jackpot feature begins, you are guaranteed a prize from the coin multipliers, plus the potential to scoop a jackpot.

Play this and other top-rated slots from Quickspin at our favourite online and mobile slot sites, such as those featured here.