Under the Bed Online Slot 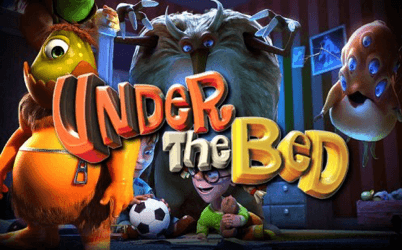 Another top-of-the-line slot game from Betsoft, the Under the Bed online slot showcases every trick the software studio has up its sleeves. With sticky wilds, free spin rounds and a 96.4% RTP, there’s plenty here going bump in the night. Learn all about how you can activate these features and the prizes hiding in the slot in more details when you read our guide to the game.

Play Under the Bed For Free! 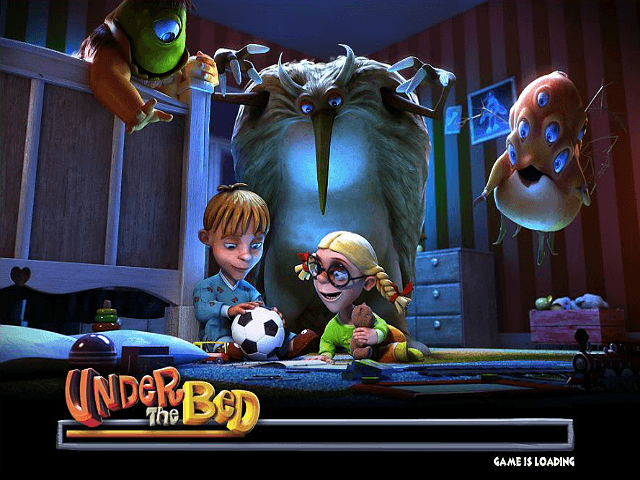 Slot Game Details Under the Bed

Under The Bed Online Slot Review

An original story of two siblings and monsters that lurk under their bed, 3D graphics, and vivid animations are blended together in this slot with a standard 30 paylines set up and a full set of extras to make one entrancing and well-paying slot machine. Play it at a real money casino on your phone or computer and you can expect prizes of up to 105,000 credits during any round you play.

Allowing you to accrue bigger prizes while you play is not only BetSoft’s classic double-up feature but also other immersive bonuses that match the theme. Capture monsters to win sticky wild spins or collect special symbols to get access to interactive cash games and free spins rounds.

Under The Bed Slot Controls and Setup

Under the Bed offers any punter an easy and simple way to play slots. Before you press the spin button on your screen, firstly use the betting controls you see on your bottom-left to set up your bet per round. With controls available for your coin value, number of paylines, and number of coins per payline, this slot gives you a chance to pick between a wide range of bet sizes, starting with a low bet of only 0.01 credits and going up to a high bet of 150 credits per round.

Because you can choose which of the paylines you want to deactivate while playing this game, it would be better if you open the paytable to view each payline before making any decisions. In the paytable, you’ll also find a list of nine picture symbols, all paying prizes in coins. If you bet one coin per line (bet per line), you’ll be able to win prizes of 5-500 coins per combination. But if you decide to bet all five coins, those prizes will multiply five times, giving you a max win of 2,500 coins for five matched symbols. And what’s even better is that there’s also a double-up feature built into the slot that’ll give you a unique chance to multiply any prize even more by taking a 50/50 bet on your winnings on a simple dice roll.

For any mobile player, BetSoft also offers the Under the Bed online slot in a To Go format which you can enjoy smoothly on almost any Android or iOS device. The only thing different about playing on a mobile phone or tablet is that most of the controls are relocated inside the game’s menu while the screen only features one spin and one double-up button.

Under the Bed Gameplay and Bonus Features

Winning money in this slot is possible not only by defeating monsters by also by matching symbols across the reels. Any time you form a sequence of three, four, or five identical symbols on any payline that’s active, from left to right, the slot will pay you a prize for that sequence. And if this prize is won outside of any bonus game, you’ll also be able to double it up by pressing the “Double Up” button on your screen.

Apart from the double-up game, the slot has three other bonus features you can enjoy, starting with the sticky wild feature. Anytime you collect a win with the monster symbols that have a special rim around them, the slot will flip the monster symbol over to reveal a sticky wild symbol and a number. This number determines the number of spins you get with the sticky wild which you can start playing immediately. And if a bonus door symbol lands at the centre of the screen instead, the slot will trigger a bonus of 12 free spins that is played in a different setting – the lopsided monster bedroom.

The final bonus feature in the slot is the cinematic pick-me game which can be triggered by at least three bed scatter symbols in any location on the screen. Once such a combination of symbols appears, the slot will take you to a second screen game where you’ll get to fight off the monsters with Jesse and Jane to win instant cash payouts.

If you like interactive and fun slot machines that you can play on any device to win solid amounts of cash, you’d want to try out Under the Bed by BetSoft. Another medium-variance slot game with 3D graphics and multiple cinematic bonus features, this game was built for punters who like good entertainment and rewards but minus the high risk. With its fair RTP (return to player) rate of 96.4% and its high hit ratio, the Under the Bed slot can promise you plenty of returns throughout your session. However, as with all slots that pay often, most of the prizes you’ll collect here will probably be small payouts but not massive wins.

If you like your casino games to pay better and don’t mind playing slots that are more volatile, you will be better off with other BetSoft pokies. The Great 88 slot, for instance, offers you high-volatility gameplay that’s seasoned with Asian-themed symbols, multiple bonuses, and prizes exceeding 1,000,000 credits. But if you want something with even more ways to win cash, you can instead try BetSoft’s Stampede slot machine – a 1,024-ways game with prizes of up to 769,500 coins per round. Find these slots and more games from the studio in one of the top online casinos and get to win huge real money prizes today!