Under The Sea Online Slot 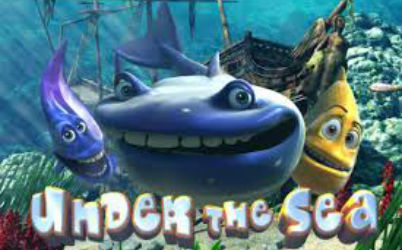 Dive deep into the clear shining water where gorgeous coral reefs and bags of coins await the most adventurous of explorers. If the medium-variance and 95.4% RTP isn't enough for you, maybe the game's huge range of bonus features is. Find out exactly what kind of bonuses await you in the game in our full review below.

Play Under the Sea For Free! 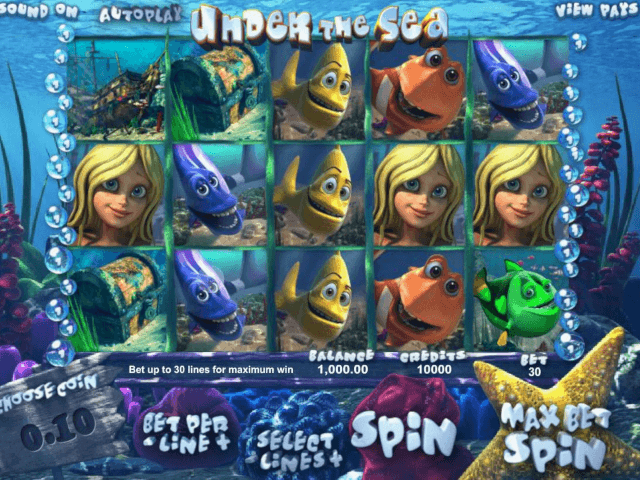 Slot Game Details Under the Sea

Under The Sea Online Slot Review

In BetSoft's stunning Under the Sea slot, you'll get a chance to explore the cool depths of the ocean and uncover mermaids, shipwrecks, and treasure chests full of coins on any device you want to play. Featuring 5-reels, 30 active paylines, and a theoretical jackpot of 480,000 coins, Under the Sea can bring excitement to any real money session you start.

What makes this slot stand out, just like in any BetSoft game, is the use of unique 3D graphics, animated symbols, and a whole collection of bonus features. So not only will this slot keep you well entertained as you play along, but it will also offer you profitable extras like free spins rounds, payout multipliers, pick-and-win bonus games, and more.

How to play Under The Sea Online Slot

Starting your underwater quest for treasures shouldn't be difficult considering the ease of use of this slot game. Begin your adventure by using the bet and payline controls at the left of the spin button to set up your bet. Thanks to the multiple betting controls and the active paylines, you have an option to play with any amount of money you want, starting with only 0.01 credits and going up to a total of 150 credits.

Unlike most slot games that get released these days, Under the Sea lets you pick whether you want to play with only one payline or up to thirty. You can see all the available paylines when you open the paytable, where you'll also be able to review every paying symbol in the game. All prizes are shown in coins and they can be won with a total of seven symbols. However, the exact amount of money you receive while playing with real cash will depend on the bet level you play with. Play with five coins on a payline (bet per line) to get prizes of 25-2,000 coins or use a minimum bet to get smaller payouts of up to 400 coins.

The game can also be played on mobile phones and tablets but in a smaller, more compact version, much like other Betsoft slots. You can use any type of iOS or Android device to enjoy the slot and you can play both manually as well as in AutoPlay mode. Adjust your bet inside the game's menu and then press the spin button to get started.

Under The Sea Features and Free Spins

You can win a portion of the ocean's treasures only when you collect a sequence of two or more matching symbols on any payline you've paid for. The prizes come left-to-right only, so any sequence will need to start at the first reel on the left to be counted as a winning combination. If you're wondering which symbol is the most valuable one to collect, just look at which one is the prettiest. It is the beautiful mermaid which pays most money here and it is this icon, along with two other fish, that pays for two-symbol sequences.

Other valuable icons in the paytable are the bonus icons, which you can collect to activate some of the slot's extra features. The wild symbol, for starters, can both substitute other base symbols to create winning sequences but it can also add payout multipliers to your wins. Collect a winning combination with one or more wilds and you can get your prizes multiplied by up to 8x. You also have the treasure chest symbols, three or more of which can activate the pick-me bonus game. Explore the depths of the sea at our recommended online slots sites to find hidden treasures and get free prizes while playing for real cash.

The last bonus feature you can find in Under the Sea is the free spins bonus. This bonus can be triggered by landing three ship scatter symbols in any locations on the reels, regardless if they are in a sequence or not. The slot doesn't have a fixed number of free spins you can win but what it does have are some win multipliers of 2x which are applied to all wins collected during the bonus!

Under The Sea Verdict and Similar Online Slots

If you like underwater slots with good bonuses and a solid payout potential, Under the Sea will be worth trying out. This slot machine can be played for as little as a penny per round but you can also bet much more to win up to a total of 480,000 coins. Since it's a medium-volatility game, Under the Sea will get you the middle ground, offering better prizes than a low-variance slot and being less risky than a more volatile machine. Of course, the hit ratio will also be higher as to award you with repeated payouts, although not many of them will be big in size. In essence, if you like charming slots that offer a balanced payout rate and can be played with any bet, you'll like this slot.

For players who are looking for something with a different payout rate, BetSoft also makes both high-variance and less volatile slot machines. If you have no problem risking more to get paid better, you can check out BetSoft's Stampede slot, which offers you 1,024 ways to win and prizes of up to 769,500 coins. On the other hand, if you are only interested in casual slots that offer smaller but more frequent prizes, you can also check out the SugarPop slot. Make sure to check out our list of top online casinos, where you'll find these games as well as huge new player bonuses.