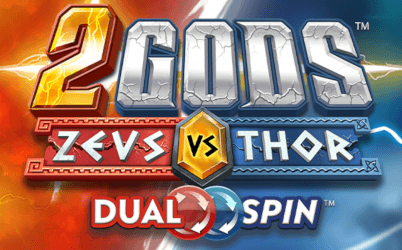 The 2 Gods - Zeus vs Thor pokie from Yggdrasil sees 2 mighty characters fighting across 5 reels. It’s a win both ways game where you pick sides to double your prizes. It comes with stacked wild symbols and a free games feature where you are guaranteed a win each time. This high volatility pokie machine has a return to players percentage of 96.5%. The bet range runs from 0.10 to 20.00 and you can scoop a huge win equal to 15,360x your total stake when the ancient gods are on your side.

Play 2 Gods - Zeus vs Thor For Free!
Bookmark It For Later

Play Free Demo
Version Directly in Your Browser
Play 2 Gods - Zeus vs Thor For Free!
Bookmark It For Later

At our top-ranked online casinos, the epic nature of a battle between Greek and Norse gods is captured across the reels. Alongside the gods, symbols include warships, helmets, and dog-like monsters from Greek and Norse mythology, along with runs and letters that pay smaller prizes. Goddesses pay 7x your total stake when either crosses all 5 reels.

One half of the game is reddish in colour and features Zeus getting ready to fight. The other side is blue, and it’s here that Thor prepares for battle. You have 1024 ways to win running from either side, or 2048 ways in total. Choose to join Thor or Zeus in each spin and you can double your win if the combination starts from the side you picked. The Win Spin free games round not only pays a prize on each spin, but also a rising multiplier.

How to Play the 2 Gods - Zeus vs Thor Online Pokie

The 0.10 to 20.00 bet range may put off high rollers, but the potential to win a much higher than average 15,360x your stake shouldn’t be overlooked. Like all Yggdrasil games, 2 Gods - Zeus vs Thor is very easy to set up and works in just the same way across desktop and mobile platforms at the most popular mobile casinos.

It comes with standard control options such as Autoplay and Turbo modes, and you can choose to play the dramatic soundtrack, or mute it. The 3 little lines on the controls open up the paytable, where you see how much you win when 3 or more symbols of the same type stop on adjacent reels from either the left or right sides.

So far, it’s a fairly standard layout, but what’s different are the 2 spin buttons. One is red and the other is blue, and you can choose which to click on each spin. Click red to have Zeus fight for you, and if you win from a combination starting from the left side, the prize is doubled. Any prizes from the right side pay at the basic rate, and the feature is reversed if you click the blue spin button.

Both of these powerful gods appear on the reels as stacked wild symbols, helping to complete combinations by acting as others if possible.

There are 2 scatter symbols in this game, with the lightning bolt and hammer each launching a free spins feature when seen in 3 or more places at once. If at least 2 scatters match the spin button clicked on the triggering game, you get 10 spins, and if not, you get just 7 extra games.

These are Win Spins, so you get a prize each time. Pick a button colour for each spin, and if the win matches the colour, a multiplier rises by 1x for the rest of the games. The Win Spins can be retriggered by more scatters.

Prizes from Win Spin multipliers can reach a huge 15,360x your bet, or 307,200.00 at a 20.00 stake. The average returns of 96.5% are well within our preferred 95% minimum, and this is a high volatility pokie, so expect to see relatively long gaps between winning spins.

If you like epic games, then the 2 Gods - Zeus vs Thor pokie machine is definitely one to play. The win both ways mechanism, with prizes doubled when you choose the winning side, is a great feature. Guaranteed wins and multipliers during the free games are another highlight, but don’t expect to trigger them too often.

For a lower volatility game with a similar style, play the Fortunes of Asgard pokie from Microgaming. Various gods appear over 5 reels and 20 lines, triggering features such as free spins with sticky wild symbols. These impressive games are found at our top pokies sites. Join the gods in their epic battle today.