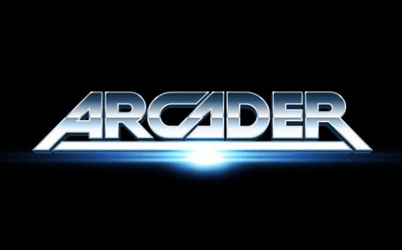 Inspired by the old coin-operated games in arcades worldwide, the Arcader pokie by Thunderkick features 5 reels and 15 paylines that are full of pixelated retro fun. Giving you medium-variance gameplay and a fair RTP of 96.1%, this pokie is aimed at both fans of old computer games and those looking for a fun and balanced pokie machine. Play for real money on your PC or mobile for a shot at winning up to 1,600x your bet per round! Check out our full review below to find out how.

Travel back to the eighties with Arcader by Thunderkick – a game that lets you revisit your arcade days and earn real money prizes at the best online casinos.

Other than old-school sound effects and graphics, this pokie machine also features some rewarding bonuses to tempt you into playing. Mystery symbols, win multipliers, free spins and sticky wilds are all part of playing Arcader and they aren’t the only extras you’ll get to enjoy.

How To Play Arcader by Thunderkick

Thunderkick’s pokie machines are built to be really easy to play and the Arcader pokie is no exception. Apart from the manual and Auto Play spin controls, this pokie only features one additional betting control which determines the size of your total stake. Press the chip button on your bottom-right to choose a wager and then hit the spin control to start playing for real money. You have 13 bet sizes to select from, starting with a minimum of 0.20 credits per spin and going up to a maximum of 100 credits.

The pokie gives you 15 fixed paylines to win your prizes on which you can see by pressing the menu button in your bottom-left corner and opening the paytable. Inside the paytable, you’ll likewise find all the symbols in the game and their prizes but also a list of all the bonus features. The pokie has eight symbols, all of which are pixelated versions of classic fruit machine icons which pay in credits. With the bottom-paying icons, you can expect prizes of 0.2-1.8x your bet, per sequence, while the top-paying symbols can give away payouts of up to 20x your bet. However, these are only the base prizes. Trigger some of the multiplier and mystery game bonuses, though, and you’ll get a special chance to collect wins that are much more attractive.

The Arcader pokie machine is also available to any player who wants to use a tablet or a smartphone to play on the move at the best mobile casinos. Like any Thunderkick pokie, Arcader is an HTML5 game that can work on both iOS and Android devices, offering you the same controls and experience no matter if you’re playing on a computer or a phone.

One thing most online pokie players will love about the Arcader pokie machine is that it replicates the gameplay of old arcade games, to a certain degree. The prizes are given as usual, each time you collect three or more matching symbols on any payline, in a left-to-right sequence. You also have wild symbols that substitute for the base icons, allowing to you complete sequences and trigger more wins. But where things get really interesting is when you trigger some of the bonus features.

The first special feature offered to you is the free spins bonus game, which you can win access to by collecting three or more of the bonus scatter symbols. Three of these icons can trigger 9 free spins with a 1x multiplier but five of them will give you the same number of bonus rounds + a more exciting win multiplier of 9x. As an added benefit, you’ll also get a sticky wild symbol on any of the three central reels during each free spins you play. And if you get some of the expander symbols during the feature, you can also duplicate icons over an entire reel for a chance to collect some really attractive wins.

Another bonus you can trigger when playing for real cash is the Mystery Bonus game. You can activate this feature by collecting three or more of the mystery symbols. Once active, this game will produce a full screen of question mark (?) icons that you have to click until you hit a blank. Each symbol you’ll reveal will give you a base prize of 2-18x your bet. And if you activate the feature with five mystery symbols, you’ll also get a 6x multiplier for these prizes, allowing you to win up to 108x your bet per symbol!

The Arcader online pokie offers an RTP of 96.1%. This, combined with the medium variance, should contribute to an even playing experience at top online pokies sites. 160,000.00 can be won from a single spin when playing for the highest bet amount.

Arcader Pokie Verdict and Other Games

In short, Arcader is another hit from Thunderkick, one that will attract any fan of creative pokie games and those looking for medium-variance gameplay. With a wide range of bet sizes at your disposal and more than a few enticing bonuses, you’ll have every chance to collect some exciting wins when you play through a real money casino and bank up to 1,600x your bet per round. The RTP is quite fair, at 96.1%, and the hit ratio is certainly not that high (23.1%) as to imply that big wins are just a rare occurrence. Give it a try if you’re looking for a well-balanced pokie with a really fun retro vibe.

On the other hand, if you’re not a fan of medium-variance pokies you can also visit some of our Thunderkick casinos to find other amazing games from the studio. For players who like low-volatility pokie machines, the software provider offers the stunning 1429 Uncharted Seas pokie which boasts one of the highest RTP rates you can find online (98.5%). And for some volatile action, you can instead try the Spectra and Fruit Warp pokies, which are one of the biggest hits in this studio’s pokie collection.