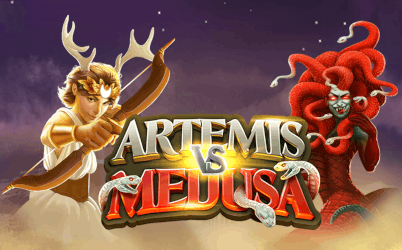 Greek gods and monsters battle it out over 5 reels and 1,024 ways to win in the Artemis vs Medusa online pokie from Quickspin. It’s an exciting, high volatility game where the cartoon style symbols lead to several bonus rounds. Wild substitutions and a coin collection feature are amongst the extra treats, and there is an unlimited free spins round. With average returns of 96.17% and a maximum win of 5,288 times your stake, this is a thrilling addition to the Quickspin online pokie range.

Play Artemis vs Medusa For Free! 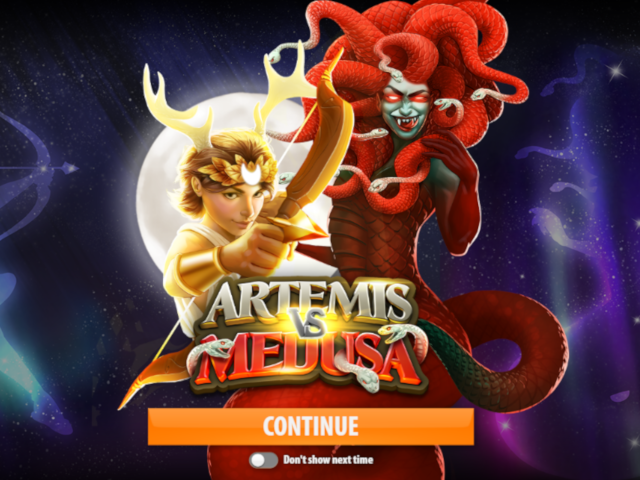 Artemis, the God of the Hunt, faces Medusa, the Minotaur, Gryphon and Harpy, in this beautifully designed game. The symbols are quite detailed in a cartoonish way and they’re typical of the high standard we’ve seen from Quickspin.

Alongside 5 mid-to-high paying characters, you’ll see 6 colourful gemstones and a couple of bonus symbols. The reels sit against a backdrop of mountains and mythical foes, accompanied by a suitably impressive soundtrack. Features such as coin collections and free games that can run and run are equally impressive.

It’s a 5-reel game, with symbols in 4 rows, and you win by matching them up across any of 1,024 different ways from the left side. A wide bet range combines with the potential to land big wins and, at the highest stakes of 100 credits per spin, you could claim 528,800 credits.

How to Play Artemis vs Medusa Pokies Game

Load the game up on your PC or mobile device from the top online casinos and you can be playing in moments. The bet range runs from just 0.20 credits per spin up to 100, so it encompasses most budgets. Whilst the features are quite unusual, there’s nothing complicated here, so even inexperienced players will enjoy the Artemis vs Medusa online pokie.

Use simple up and down arrow button to select stakes and other control options include an automatic spins mode. Click the 3 dashes on the controls to unlock the paytable, where you see how much each symbol pays out at your current bet level.

The lowest paying gem is worth 1x your stake when it crosses all 5 reels, whilst the top paying symbol of Artemis is worth up to 25x. It’s even better when you check out the top online casino bonuses available at Gambling.com.

Look out for the golden antler wild symbol, which acts as all except the bonus icon to complete combinations in this Quickspin online pokie game.

Mid-value monster symbols can have golden coins on them. If these appear at the same time as Artemis in a golden frame on the right-side reel, all the coins in view are collected in a meter and you win a Bounty payout.

The main feature of Artemis vs Medusa is the Unlimited Battle free spins bonus round, triggered by 3 or more bow-and-arrow scatter symbols. The view changes and you see Artemis and the monsters above the reels against a star-filled sky. Each Monster on the reels at the same time as Artemis adds to a meter, but if Artemis appears without a monster, one of the beasts is removed and you win a Bounty reward.

The reels spin for free as Artemis fights off the attacking beasts, and the round continues until the battle is resolved by all monsters being removed, or the meter reaches Level 15.

The real money pokies maximum win from a single spin is equal to 5,288x your bet, which can be as much as 528,800 credits at the maximum stake. This is a highly volatile pokie, so you can see several losing spins between winners, but the overall return to players (RTP) is also reasonably high, at 96.17%.

The topic of ancient Greek mythology is popular and the Artemis vs Medusa online pokie covers the theme in great style. The graphics are good, in a slightly cartoonish way. But if you want realism, try the Age of the Gods: Medusa vs Monsters online pokie from Playtech.

Artemis vs Medusa has some exciting bonuses, with the Unlimited Battle spins being a real highlight. Of course, the games won’t actually go on forever, but you should see 30 or so play out before the fight ends.

The bounty payouts from gold coins on monsters can also create some nice wins. You’ll find this battle between good and evil at our top-rated casino sites. Be sure to collect their welcome bonus deals, such as free credits and free spins when you sign up.