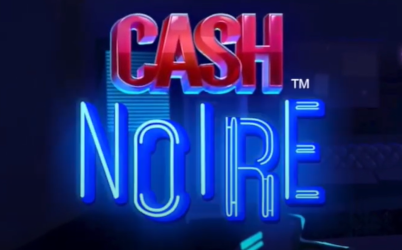 The Cash Noire online pokie is a NetEnt release with an unusual, movable “crime zone” feature as well as 1,024 paylines and an RTP of 96.06%. It is a low-variance game with a maximum payout of 5,000 times your stake. Read on for information on features, compatibility and free spins for this NetEnt online pokie in our review below and check out Gambling.com for the best online casino sites and hundreds more reviews.

Cash Noire is an unusual game with 1,024 fixed paylines, a 5-reel setup, a maximum payout of 1,000,000 credits and graphics straight out of a Raymond Chandler novel come to life. The soundtrack is ominous and is dotted with an unusual feature – narration from a detective character, befitting the noir movie-type theme in this NetEnt online pokie. This real money pokies game has a minimum bet of 0.20 credits and a maximum bet of 200 credits.

The music and narration add depth to a game where the symbols are some shady-looking people, various weapons and a safe as a mystery symbol. There is also an autoplay button to the left of the main spin button, where you can choose as few as 10 and as many as 1,000 automatic spins (or you can hit the square button during autoplay to resume normal play). There is also a Turbo Spin button to the right of the main spin button.

NetEnt’s Cash Noire online pokie is an unusual real money NetEnt online pokie entry for a couple of reasons. First, players will notice immediately that this game has a “crime zone” of at least three adjoining squares lit up in red. These three blocks can be in a straight line or in an “L” shape and the zone moves around the board with every spin.

Another interesting element is that the crime zone expands to four or five squares when you get on a winning streak. The Avalanche feature helps you compile wins (more on that later) with the ultimate goal of getting into the Free Spins game.

Click on the button with three bars at the bottom left of the screen to access another screen with the “i” button at the top (that explains the paytable and the game’s features), a setting button in the middle and a game rules button at the bottom.

Perhaps the best thing about this game, other than the intriguing theme, is the 1,024 fixed paylines that pay out for three or more matching symbols. Those matching symbols just have to be on at least 3 consecutive lines starting on the left; the symbols don’t have to be adjoining for you to win.

The Avalanche feature is replicated from several other games – when you get a winning spin those winning symbols disappear and you get a respin where other symbols drop down to replace those symbols. This keeps happening until you have a losing spin.

Follow the zig zag pattern of “clues” to the left of the reels. After three straight winning spins you will reach a +1 which means the “crime zone” expands from three squares to four. With a few more wins it expands to five. All the crime zone really does is turn the mystery symbol (a safe) into all matching symbol if it lands within that red-outlined zone. But once you have a losing spin you drop back down to the bottom of the clues, and that leads to perhaps a frustrating aspect of this game.

When you do get to free spins, the pace of the music quickens and the left side of the screen shows a car advancing down a street – a “city chase map” where, at every few stops (i.e. wins) you pick up either multipliers or more free spins. The farther you get, the more your multiplier accumulates, until the free spins end.

The Cash Noire online pokie is available in a mobile version for Android and iOS users.

The Cash Noire online pokie has an RTP of 96.06%, pretty average for players who have experience on the top online pokie sites. This NetEnt online pokie is a low-variance game with a maximum bet of 200 credits and a max jackpot of 5,000 times the stake, or 1,000,000 credits.

This theme is so unusual that there are few games to compare, though NetEnt’s Gods of Gold Infinireels online pokie at least has a similar 96.21 RTP% and a max jackpot also reaching 1,000,000 credits.

Players who enjoy both online pokies and murder mysteries or film noir classics will have a ball with Cash Noire. It is a lot of fun to play and the wins are frequent, if not usually very big. But even if you are an experienced pokie player, be sure to study the paytable, the features and the rules or you might get lost in the big city.

Check out Gambling.com to learn about our online casino bonuses and read reviews of hundreds of games from dozens of manufacturers.