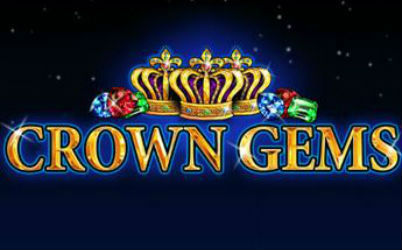 Anyone seeking a basic online pokie machine can find it with Crown Gems by Barcrest. It gives you 5x3 reels and 10 fixed paylines. Spins are available for as little as 0.10 with a maximum bet of 500 in this medium-variance pokie. Get more information on the compatibility, bonuses and payouts when you read our Crown Gems review below.

Sometimes you just want a pokie machine that’s as basic as it gets, providing you with a chance to win real money online in the simplest of ways. Crown Gems by Barcrest is exactly such a pokie, giving you 5 reels, 3 rows of symbols, and only 10 fixed paylines. At your first try, the game may not look too exciting but that’s only until you realise its full payout potential.

Unlike most popular Barcrest online pokies offerings, Crown Gems is a Flash-based game that comes with no bonus side games or extras like wilds and scatter symbols. But it does have some unusual payout mechanics that let you trigger prizes from multiple locations as well as top-paying icons that can be more than generous. Read our complete guide to the game to get more details on the rewards and features of the Crown Gems pokie machine.

Even if you have never played an online pokie machine, Crown Gems is very simple. To set up your stake, you’ll only need to worry about the line bet control which determines the value of your coins and the size of your total bet. With a few simple clicks, you can change from a wager as small as 0.10 credits per round to a high-roller’s bet of 500 credits. Once you adjust your stake, just use the spin or Auto Play controls to start collecting some real money prizes.

Crown Gems keeps it simple, offering you not only 10 fixed paylines but also just eight symbols to watch. You can view all the paylines, symbols and prizes that are available in the game when you open the paytable, which can be accessed by pressing the help button in your bottom-right corner.

The symbols are split into two groups, one containing four card symbols and the other showing only gems. The card icons pay the smallest returns, between 10-200 coins; the gems pay much bigger payouts, up to 5,000 coins. And thanks to the multi-ways mechanics, you’ll get a chance to trigger these prizes in more than just one way.

If you are more of a mobile player, we suggest trying out some of Barcrest’s other pokie machines because Crown Gems is only offered as a Flash game. Unlike most of the online pokies from this classic game studio, Crown Gems was not redesigned as an HTML5 game and thus can’t be played on iOS or Android mobile devices.

You may get all sorts of gems on your screen during every spin but the only way you can cash them in is by joining the symbols together. Like in most pokie games, the Crown Gems pokie will pay you real money for every sequence of three, four, or five of the same symbols shown consecutively on a payline. But what’s unique about this pokie machine is that the prizes aren’t paid only from left-to-right but from multiple directions.

Offering a medium-variance gameplay with high betting limits, an RTP of 95.05%, and very rewarding symbols, the Crown Gems pokie can pay you up to 250,000 credits on a single bet any time you play for real cash on top online pokie sites.

Unlike the majority of online pokie machines, where your matching sequences will need to begin at the leftmost reel to pay off, here they can also begin from the right side and even from the middle. This way, even if you get three identical icons at the middle of your screen, you’ll still win some money.

These special mechanics can come in very handy when you end up with some of the crown symbols which can pay up to 5,000 coins for a single five-of-a-kind win. Multiply that payout by the number of available win lines and you get a jackpot of 50,000 coins! Other rewarding symbols to collect are the blue/green and red gems, which can pay the second and third-best prizes of 400 and 500 coins, respectively.

If you like your pokie machines to be simple but also to have a good payout potential, go for the Crown Gems pokie. The only downside is that, even with a 95.05% RTP, the hit rate is quite lower, which is why this game may not be very suitable for players who are just starting out. But if you have some experience with online pokies and are looking for a game you can play for real cash with higher stakes, this pokie can pay handsomely.

For those seeking something even more challenging and rewarding, we suggest that you try some of the high-variance alternatives you can find online. Novomatic’s Just Jewels Deluxe gives you basically the same game but with active paylines, a gamble function, and special scatter payouts you can trigger outside of the paylines.

And for the exact same pokie but with a special high-roller side bet that unlocks 50 paylines and a higher RTP of 96.08%, you have the Crown Gems Hi Roller pokie machine from Barcrest. For even more games from the software studio and a chance to grab some generous welcome bonuses, make sure to visit some of our top-rated Barcrest online casinos.