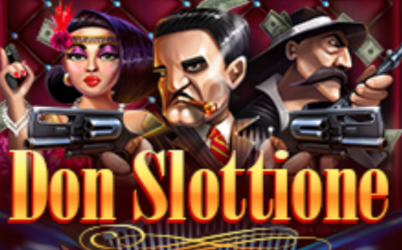 Play Don Slottione For Free!
Bookmark It For Later 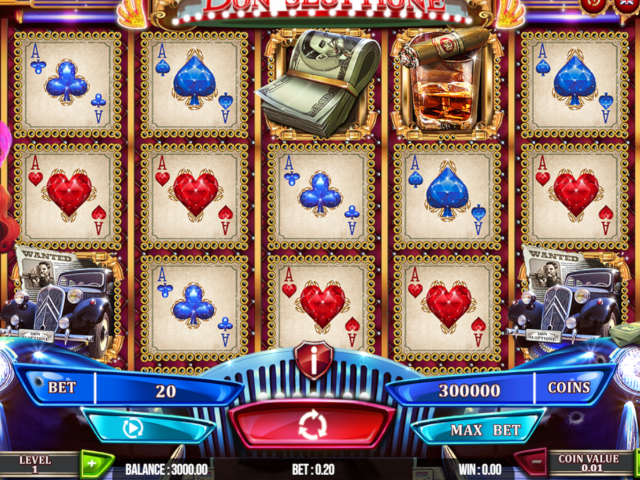 The Don Slottione online pokie powered is built for the lawbreaker in all of us. Its reels sit on the hold of an old-school gangster mobile with its lights illuminated. The car sits in a darkened back alley somewhere in the big city. The driver is waiting for the Boss of Bosses to finish up his latest meal. Whether it’s time to go to the mattresses, whack an unwitting foe, or take off with the hottest showgirl in town – who just happens to be along for the ride, Don Slottione is ready for action. And so will you when you play this game.

The Don Slottione online pokie can be found at any of the top online pokies sites. It provides the experienced or novice player a chance to win on multiple different levels. The game features a very basic setup that allows you to figure out how you can win. The line wagers range from $0.20 up to $20. This game delivers a top jackpot of 2,500x your line wager, which would mean a top potential payout of $50,000. There is no progressive jackpot available.

The Don Slottione online pokie powered by Fugaso is fully mobile and can be played any Android or iOS device without losing its many cool features. It carries the same automatic controls. Players can use the regular spin button to wager manually or engage the Auto Play mode to take a break from tapping the screen.

Don Slottione online pokie from Fugaso is a natural fit for players who are looking for the best real money pokies. The special features in this game get the adrenaline flowing, shift into high gear and make you feel like taking a ride on the causeway, all whilst skipping the toll booth. But you might be disappointed to find there are no car chases in this Bronx tale.

The Don Slottione online pokie from Fugaso brings a medium-to-high variance to this gun fight. The maximum RTP is 96%. Take your best shot at becoming the boss you always wanted to be.

The Don Slottione online pokie from Fugaso comes with some familiar characters and is set in a world that has been immortalized on film for nearly a century. The animation adds a high-tech feel to the old-time underworld images we’re used to seeing. The game is loaded with features and intrigue. Someday, and that day may never come, you will owe me a favor for recommending you try out the Don Slottione. Until then, play like your life depends on it.

Players who like underworld themed online pokie games might also enjoy the Hitman online pokie from Microgaming that has 5 reels and 15 paylines. Feel free to visit any of our reviewed casinos from Fugaso and other providers!