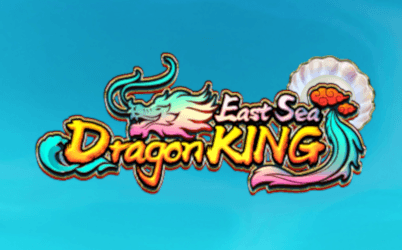 The East Sea Dragon King online pokie from NetEnt has a classic 5-reel format with a maximum payout of 6,000 times your stake. It has an Asian sea theme (hence the name) with graphics that are eye-catching, if not terribly unique. The soundtrack has Asian-sounding touches but it gets repetitive pretty quickly.

The unusual structure of this NetEnt online pokie means there is not a set number of paylines. Instead players will want to see clusters of the same symbol to get payouts (more on this later). There are seven non-wild symbols that pay out.

This 5x3 game has simple gameplay and it lets you bet on 10 levels, with coin values from 0.01 to 2.00. In practical terms this means you can bet from 0.10 to 200 per spin. So, you bet according to the level selector and the number of coins, not by line. The paytable lists payouts based on Level 1 so multiply those numbers times your bet level to figure out what your winnings are for each combination. Access the paytable by clicking on the “I” button at the bottom left of the home screen and be sure to study it.

The most unusual aspect of the East Sea Dragon King online pokie is the pay structure. Rather than a set number of conventional paylines, this game has has Cluster Pays, meaning a group of 5 or more of the same symbol that are vertically or horizontally adjacent to each other anywhere on the 5 reels (not just left to right) will pay out. If there are multiple clusters of 5 of more of the same symbol on a spin, they pay out separately.

The paytable is somewhat complex in this real money online pokie game. The green jade dragon ornament is the most valuable non-wild symbol, paying out 30 times your stake for 5 ornaments, up to 10,000 times the stake for filling all 15 spots on the reels. Other symbols pay less, all the way down to the lowest-value symbols, the bronze coins (there are also silver and gold coins). For instance, 7 seashells pays out 35 coins on a Level 1 bet but 350 coins on a Level 10 bet.

Expanding Wilds are an unusual feature of this NetEnt online pokie game. When 6 or more Wilds form a cluster, they only substitute for the symbols on either side of the cluster. Wilds can appear on any reel and substitute for all symbols. In the main game, one or more Wild symbols automatically expand to cover a whole reel and they lead to a respin on the other reels. On the respin, if any additional Wilds land, they lead to another respin.

The Wilds pay out when they expand, then pay out again on the respin and, if more wilds appear on subsequent respins they keep paying out until the wilds run out. If you land Wilds on all 5 reels (all 15 spaces are covered with Wilds) it pays out 10,000 times the stake, a decent payout for folks who enjoy playing pokies for money.

Other than that, there are not a ton of extra features on the East Sea Dragon King online pokie – no conventional free spins, scatters, multipliers or random jackpots.

The maximum win, assuming Bet Level 10, is 200,000 coins on the East Sea Dragon King online pokie. The RTP is 96.23% for this high-variance game, pretty standard for best online casino pokies. The minimum bet on a spin is 0.10 and the maximum bet is 200 units.

Even as a high volatility online pokie, the hit rate of 14.6% is not that impressive for this latest NetEnt online pokie game. Having said that, as far as gameplay it is suitable for all players, from novices to veterans of the top online pokies sites. Your possible payouts will, of course, depend on how much you are willing to risk, i.e. the Bet Level you pick.

For a different high-volatility option from NetEnt, you might want to try the Narcos online pokie, inspired by the television series of the same name. Narcos has 243 paylines and a maximum bet of 200 to go along with an identical RTP of 96.23% but a much better hit rate of about 24%. If you wish to keep your money a bit closer to your vest will still trying to win a bit, the low-volatility online pokie classic Starburst could be more your speed.

Check out our long list of Gambling.com online pokies to further explore your options for playing with real money.