From China With Love Online Pokie 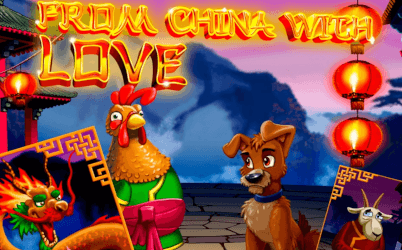 Play From China With Love For Free!
Bookmark It For Later 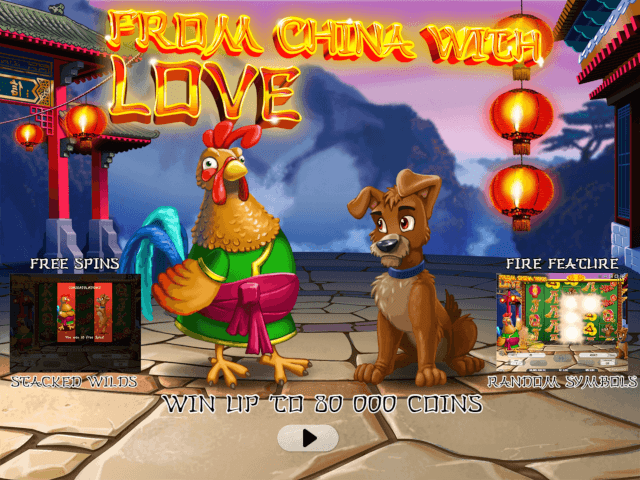 Play Free Demo
Version Directly in Your Browser
Play From China With Love For Free!
Bookmark It For Later

From China with Love is a new online pokie machine from Fugaso that is aimed at all fans of Asian pokies and punters who like something more out of their games. At first glance, you become immediately attracted by the peaceful music and the crisp symbols this pokie features. But once you start spinning away, you realize that this is not another casino game with only good looks to offer. With 40-paylines to win prizes on, but also free spins games, symbol swaps, and stacked wilds, From China With Love has all the features you need to bank some good profits.

How to Play From China With Love

You don’t need any prior experience with online pokies to enjoy From China With Love. The only things you have to do to start is to just pick a coin size you feel comfortable with and then choose whether you want to bet one coin per line or up to 10 so you can reap better profits. The least you can pay for a spin is 0.20 credits (0.01 per coin) while the highest wager is capped at a large 200 credits per spin.

To win a prize, you need a combination of at least three of the same symbols to land on any payline in succession, starting at the leftmost reel and stretching towards the rightmost one. When playing with one coin per line, the biggest prize you can hit with a single combination is 200 coins, while the lowest one is only 5 coins. If you bet more coins, the payouts will be multiplied accordingly, giving you a shot at triggering five-symbol prizes of up to 2,000 coins when playing with real cash. Multiply those payouts by the number of paylines, and you get a base jackpot of 80,000 coins! And the best part is that the pokie only charges you for 20 paylines (0.20 minimum bet) while giving you double the chances to make some real money.

For punters that want to play on their phones, Fugaso also has a touch-friendly version of the pokie available for playing. The mobile casino version of the game can be played on practically any Android or iOS smartphone or tablet, be it an older device or a brand new one. To start playing on a phone, just switch to landscape mode and tap the screen. The spin controls will be clearly visible on your right-hand side while the bet controls can be accessed via the hidden menu sitting at your bottom-right.

From China With Love Free Bets and Bonus Features

There’s more to playing the From China With Love pokie than just the nine symbols you see featured in the paytable. This Chinese casino game is also equipped with a number of extras, the main one being its free spins games. To get a bonus of 10 free spins, you need to get the rooster and dog symbols to appear stacked on reels 2 and 4 during a round. Once the bonus starts, you can also trigger 2 extra spins with a stacked wild symbol on your third reel, and that’s only the beginning.

You see, other than stacked symbols, the free spins bonus is also played with a special Fire Feature which is activated on every spin. The Fire Feature will get the rooster to ignite the reels with his wings, burning existing symbols on the screen to replace them into one randomly chosen symbol, including the wild symbol. This feature can also appear during the base game where it can be randomly triggered on any spin.

Another feature you can trigger randomly during the main game, or the free spins round, is the progressive jackpot. The pokie offers three types of jackpots (Mini, Midi, and Maxi) and all of them can also be found in a number of other pokies by Fugaso. Each jackpot offers a different prize that increases incrementally over time and each can be won on any spin or bet level.

From China With Love Maximum Win, RTP and Volatility

In a nutshell, if you like rewarding medium volatility pokies that offer simple features and affordable wagers, From China With Love by Fugaso is worth giving a look. However, don’t expect to be showered with a massive prize so easily here, as the higher hit ratio of this pokie hints that it’s more about paying often than paying really big. The RTP is a generous 96.52%, so it should offer players plenty of value.

From China With Love Pokie Verdict

Thanks to its wide betting limits, appealing bonuses, and payouts of up to 2,000 coins for punters who bet real cash, this pokie can make a fan out of anyone.

For a better shot at bigger payouts, you can try out some of Fugaso’s more volatile pokie machines. The Crazy Bot pokie is one high-variance pokie game that’s been a favourite with players thanks to its cascading reels, jackpots, and big payout multipliers. And if you want pokies that can pay large prizes for a single combination, you have the Book of Tattoo where a six-of-a-kind win can bank you a prize of 7,500 coins. For more high-variance pokies or other top games, take a look at some of the new online casinos listed on our site.