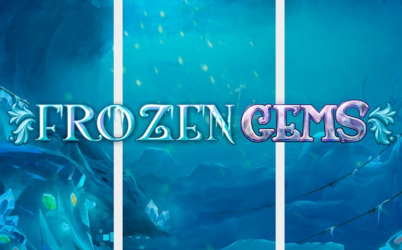 The Frozen Gems pokie machine is an ice-covered game set in a jewel-filled cave. You have 243 ways to line up symbols across the 5 reels for a win, with a bonus reel extending this to up to 8,748 ways. Other features of this PC and mobile compatible pokie include cascading reels, free spins with rising multipliers, and wild substitutions. It’s a medium to high volatility pokie with average returns of 96.36% at the and a huge potential maximum prize equal to 10,000x your stake at the best online casinos, or 1,000,000.00 at the highest bet level.

Play Frozen Gems For Free!
Bookmark It For Later 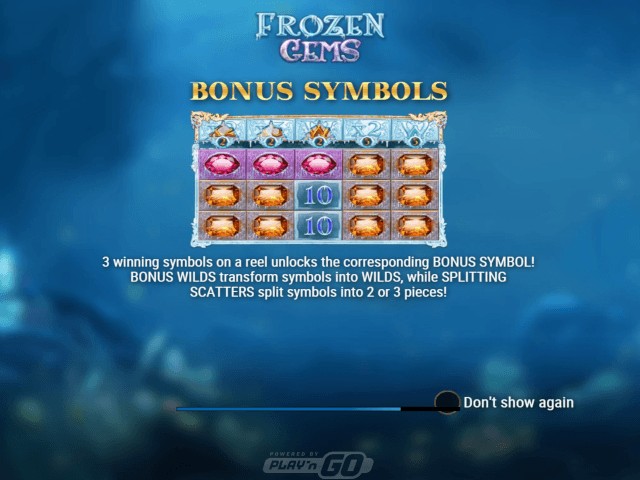 Ice-covered playing card symbols and higher-paying sub-zero jewels adorn the 5x3 grid, and even the decorative frame surrounding the reels is dripping with icicles. It’s enough to send a chill down your spine, but you’ll soon warm to the winning potential of the Frozen Games pokies game.

It starts out as a 5-reel, 243 ways to win pokie with 3 rows of symbols, but symbols can split into 2 or 3, and there’s a bonus row above the main game that combines to give you a maximum of 8,748 ways to win. Cascades can create win after win, and a multiplier rises by 1x for each cascade in a series. During the free games feature, the multiplier keeps rising, even when a series of cascades ends with a non-winning combination.

It’s a game that appeals to a wide spectrum of players, with a generous bet range to cover most budgets. It’s easy to set up and play on PCs, iOS, Android, and Windows mobiles at the high ranked mobile casinos, but has enough exciting features to keep even the most experienced players engaged.

How to Play the Frozen Gems Pokies Game

The standard Play’n GO control panel featured here is simple to use, with a couple of clicks on a scrolling bar beneath the reels all that’s needed to choose your stake. Options vary from 0.20 to 100.00 per spin, which is another Play'n GO standard. Autoplay and Turbo modes are available, and the easy to follow paytable is accessed with a click on the ‘I’ button.

The paytable reveals that you win by matching 3 or more examples of the same symbol on any row across reels from the left. You win the most from a golden wild symbol, which not only acts as others if it can bridge a gap in a run of matching symbols, but also pays back 2.5x your bet when it lands across all 5 reels without substituting.

Winning symbols are removed from the reels and new ones cascade from above, which can create new combinations. This triggers more cascades, which carry on until no more wins are formed and a win multiplier rises by 1x for each cascade in a row, only resetting on the losing spin.

The real innovation here is the way you unlock extra ways to win, and unfreeze the bonus row above reach reel if you land the same symbol on all 3 rows of a reel, or scatter symbols appear. Two scatter symbols on the same reel splits the reel into 6 rows, while 3 scatters split it into 9 rows high. A bonus wild symbol turns all symbols on the reel into extra wilds for the following spin.

Three or more scatter symbols will open up a free spins bonus feature, with 9 extra games awarded, and 1 further spin each time the scatter appears throughout the round. The best part is that win multipliers don’t reset at the end of cascades, and instead, keep on rising until the end of the feature.

The 10,000x maximum win multiplier adds up to a huge 1,000,000.00 prize at the highest stake. That’s more than you get from most Play’n GO pokies which generally have a 5,000x maximum payout. Frozen Gems is a medium to high volatility pokie with an excellent average payback percentage of 96.36%.

Our Verdict on Frozen Gems Pokie

The choice of playing card icons and jewel symbols is a little underwhelming, but the Frozen Gems pokies game is certainly colourful, and it comes with some excellent bonus features. The way symbols split, and the top row activates can take a bit of getting used to, but once triggered a couple of times you’ll see that it’s actually quite easy to follow.

Symbol cascades with rising multipliers, and unlimited win multipliers during the free games will help you warm towards the Frozen Gems online pokie when you play it at the top-ranked online casinos featured at gambling.com.