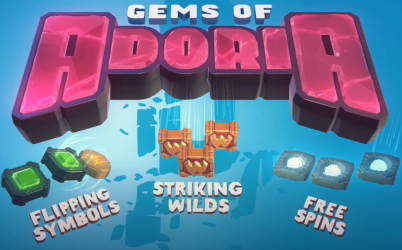 NetEnt brings 3D graphics and unusual flipping reels to customers with the Gems of Adoria online pokie, offering 3D graphics. This 5-reel game has a 96.13 RTP and a maximum win of 500 times your stake. Turn to Gambling.com for a complete review of the bonuses, compatibility and features in this NetEnt online pokie when Gems of Adoria is released.

The Gems of Adoria online pokie has a fixed 5x3 visual format, much like many other online pokies from NetEnt. But the graphics and the theme are unconventional.

The 3D graphics have players zooming in, out and around so instead of looking straight at a static board, players will see a view as if they are above the board or at an angle. This game also offers striking wilds and flipping symbols to keep a player’s visual interest.

One of the first things players will notice about Gems of Adoria is that this NetEnt pokie has a board that shifts around in a 3D format, but apart from that the gameplay is fairly standard.

This real money online pokie offers wilds and scatters plus a random feature in a low-volatility game. A notable feature of the Gems of Adoria online pokie by NetEnt is that striking wilds can fall atop the board any time, dropping on to replace base symbols.

Gems of Adoria has 15 paylines, paying left to right only.

Players can get bonus spins by hitting three or more scatters. The scatter symbol is a glowing blue stone encased in rock. These free spins can also offer Wild symbols, giving a boost to your potential payout.

A feature that should catch the attention of those who visit top online pokies sites is that a group of two, three, four or five symbols can flip on the board horizontally or vertically. Those flips will increase your payout.

This game is offered in a mobile online pokie format. So, if you’re into playing online pokies for real money on portable devices, including Android and iOS systems, then Gems of Adoria could be an addition to your system. NetEnt has made this game so that all options in the desktop rendition are also available in the mobile version.

RTP, Maximum Bet and Variance for Gems of Adoria

The maximum win is 500 times your stake, so the biggest win possible (with a 200-unit bet) is 100,000. That’s not an unusual max win for a low-volatility game but high rollers who play real money pokies will likely aim for other online pokie jackpots that promise a better possible return on a 200-unit bet.

See our list of NetEnt online pokies at Gambling.com for a host of online pokie games that are available through NetEnt.

In addition to 3D graphics and a space theme in a game such as Gems of Adoria, NetEnt also gives customers a wide variety of choices. For instance, Street Fighter II: The World Warrior will offer a similar RTP but is a callback to a popular video game from the 1990s. On the other hand, Wild Water has a 1960s surfing theme and a maximum bet of 100 units on 20 paylines.

When will Gems of Adoria Be Released?

NetEnt will make Gems of Adoria available to the public on June 9, 2020.