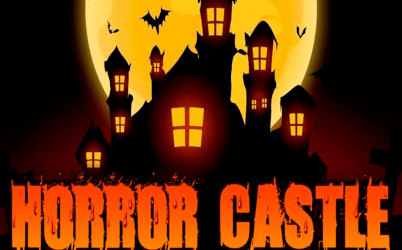 If you’re up for some classic and spooky pokie entertainment, Horror Castle by Fugaso is your game. One of the most immersive pokie machines in Fugaso’s game offer, Horror Castle features 5 reels and 25 paylines full of classic Halloween symbolism that can be enjoyed on any device, desktop or mobile. With its mid-variance gameplay, this pokie will offer you a shot at claiming prizes small and big, up to 50,000 coins per combination, and that’s only the beginning.

It makes no difference whether you’re an experienced player or not, Horror Castle will still be easy to play. Using the large buttons on your left and right, you can choose the value of your coins and place between 1 or 10 coins per payline. The minimum stake is set at 0.25 credits for a round (0.01 credits per coin) while the max bet can go up to 250 credits per spin, giving you a range that can fit any budget you have in mind, be it big or small.

Prizes in this pokie game are given by ten base symbols plus two special icons that can also activate bonus features at our recommended online casino sites. Surprisingly enough, you won’t be able to check out the various paylines as you play along but you can only see them once you open the pay table. When you play at a real money casino with the minimum number of coins, this pokie will offer you prizes between 5 and 5,000 coins per combination, depending on the symbol. With more coins per payline, those prizes multiply by the number of coins selected for a chance to hit payouts of up to 50,000 for a five-of-a-kind win. One unusual feature worth noting here is that the pokie can also switch to pay both ways during the bonus round, giving you even more opportunities to bank a prize.

Fugaso also offers a mobile version of the game that was adapted for touch-screen devices, including most iOS and Android-based phones and tablets. The mobile Horror Castle pokie offers you the same playing experience but in a more compact format. To play on the go, just change to landscape mode and use the big spin buttons to control your rounds.

During the base game, the Horror Castle pokie machine pays only when you collect a matching combination of three or more symbols on a payline, starting with the first reel on the left. The most rewarding symbol in the game is the pumpkin wild which pays the best prizes and is featured during the special respin bonuses. If the wild lands on reels 1 or 5, the symbol will expand to cover a whole reel with sticky wild symbols and give you one bonus respin. The second respin feature is triggered randomly and it makes the jack-o-lantern throw an exploding pumpkin on the reels which creates new wild symbols and gives you another free respin.

Even more exciting than the pumpkin wilds are the pokie's scatter symbols. These symbols can trigger prizes of 1-100x your total bet plus a bonus of 10 free spins when three or more of them appear at the same time. Once activated, the free spins are played with an expanded wild symbol on the middle reel and both-ways-to-win mechanics, giving you plenty of opportunities to collect some bonus prizes when playing for real cash. The free spins can also be retriggered by collecting three or more scatters again during the bonus for an indefinite number of times.

Like many other Fugaso pokies, this is a medium variance pokie game that can pay back both small and big returns at our top-ranked online casinos, up to 50,000 coins for five-matching symbols when playing with real cash. However, the random respin features of Horror Castle give this game a high hit rate, which hints that the most frequent payouts will be small in nature rather than big. The RTP of 95.99% is exactly in line with what pokie players expect from modern online pokie games.

Another entertaining game from Fugaso with a wide range of betting limits, the Horror Castle pokie was built to attract all sorts of pokie players. So, if you prefer playing online pokies that involve more risk with a chance for large prizes, you may want to try out some of Fugaso’s more volatile pokies instead.

One great option you could check out is Fugaso’s the Mummy 2018 pokie, which was loosely inspired by the Mummy film franchise. This pokie machine is a mid-high variance game that features all sorts of extras, including free spins, stacked symbols, cluster pays mechanics, and even bonus respins. The more recently released Ghost Glyph by Quickspin will also likely be another Halloween favourite for pokies players at the best online casinos.