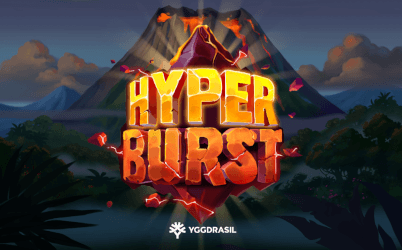 A volcano rumbles behind the reels of the Hyper Burst pokie from Yggdrasil. This highly volatile game can pay out explosive wins of up to 12,800x your total bet, or 1,280,000.00 at the maximum stakes. It’s a 6-reel game with 25 paylines, where reels merge in a flow of lava after each win and during a series of respins. Multipliers can kick in, leading to payouts of 10x the base rate. The colourful design and stylish symbols stand out on PCs and mobiles at the top online pokies sites. 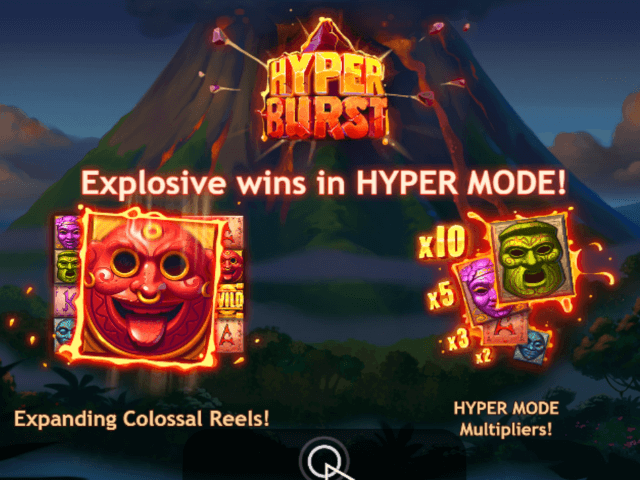 Like many games from Yggdrasil, the Hyper Burst pokie machine uses a pleasing cartoon style that fills the screen of your PC or mobile with colourful images. The 6x4 grid features lower paying card symbols and higher value tiki masks. It all sits against a backdrop of a lush tropical island somewhere in the Pacific, but the huge volcano behind the reels hints at things to come.

How to Play the Hyper Burst Pokies Game

The available bet range runs from 0.10 to 100.00 per spin, which gives a good spread of options to suit the majority of bankrolls or those playing with a free spins bonus. To get started, load the Hyper Burst pokies game onto a PC, iOS, Android, or Windows mobile from a recommended casino, then select your bet using the Coin Value + or – tabs.

As this is a high volatility game, you might not see winning combinations land as often as you would in lower variance pokies, but when prizes come, they tend to be quite high value. Average returns come in at 96.02% and with the multipliers, it’s possible to claim a win of 12,800x your total bet. At a 100.00 wager, that’s a huge 1,280,000.00 coming your way.

We love the neat design features, and potentially rewarding respins round of the Hyper Burst pokie. The tropical island and volcano themes are deservedly very popular and used in many pokies games, but this is certainly one of the better examples. Apart from the wild symbol acting as others if it can complete combinations, there’s just the single bonus round, but it’s an excellent one.

You can play the Hyper Burst pokie at our top-ranked online casinos. Check out the ones featured here at gambling.com and be sure to claim the best welcome bonus deals.