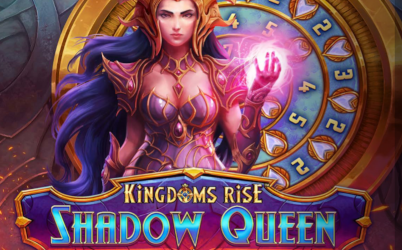 Playtech and partner studio Ash Gaming bring you an exciting addition to a fantasy-themed series of pokies. Kingdoms Rise: Shadow Queen is a 5-reel, 25-line game filled with magical symbols, witches, and wizards. Features include wild symbols and a Magic Wheel that spins up a number of free games with rising multipliers applied to each win. Three progressive jackpots are available at the best online casinos, and in the main game, wins can reach 6,250x your stake. It’s a high volatility pokie with an RTP of 96.46% and you can play Kingdoms Rise: Shadow Queen on PCs, iOS, Android, or Windows mobiles. 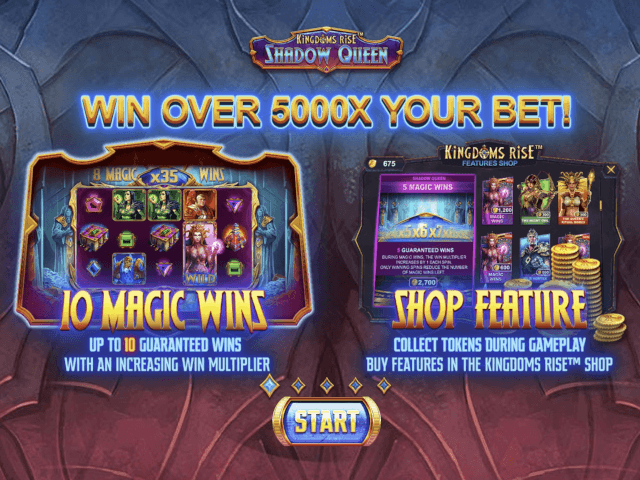 Playtech and Ash Gaming have designed a pokie full of powerful symbols, with the various magical characters joined on the reels by potions, treasure chests, and crystals. The current values of 3 progressive jackpots are displayed to one side, and the whole game plays out against the backdrop of the elaborate Magic Wheel.

How to Play the Kingdoms Rise: Shadow Queen Online Pokie

Like all Playtech pokies, Kingdoms Rise: Shadow Queen is easy to play, and comes with a broad bet range to suit players with any level of experience or bankroll. You can stake from 0.10 to 500.00 per spin, with lots of options in between, all easily set using Plus and Minus tabs on the control panel.

Along with the wild Shadow Queen symbol, you have a wheel scatter symbol. This opens up the main feature of the Kingdoms Rise: Shadow Queen pokie when it lands on each of the middle 3 reels at the same time.

Like others in the range, the Kingdoms Rise: Shadow Queen pokies game has 3 progressive jackpots which pay out at random. The Daily Strike is won every day, and the Power Strike pays out when it hits a certain level. The Epic progressive jackpot starts at 100,000.00 and grows from there until hit.

If you like magic and fantasy-themed pokies, then you will love Kingdoms Rise: Shadow Queen. It can be harder to line up winning symbols than it is in lower volatility games, but once you trigger the Win Spins, prizes and multipliers are guaranteed.