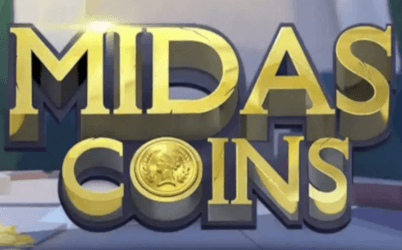 Play Midas Coins For Free!
Bookmark It For Later 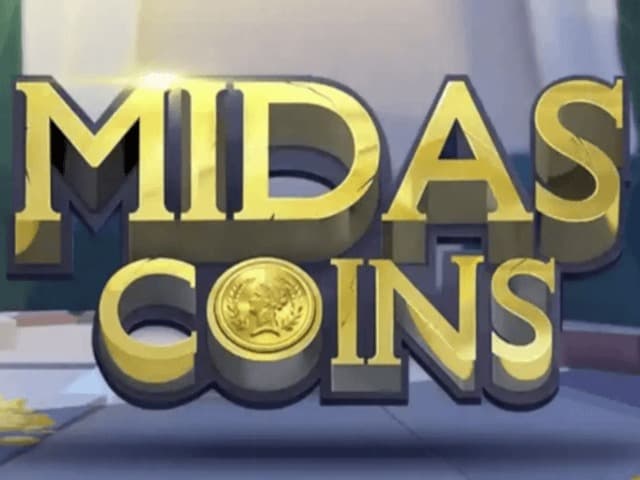 The legend of King Midas comes to desktop and mobile casinos in the Midas Coins online pokie from Quickspin. Based on the tale of a king who could turn everything he touched into gold, this game can turn any bet into a win 5,000x its value.

How to Play the Midas Coins Pokies Game

You can play the Midas Coins pokie on PCs, iOS, Android, and Windows mobiles and however you choose to access it, the controls are easy to use, so you can get started in seconds. A betting range of 0.25 to 100.00 will suit most players at the top online pokies sites and you select stakes with a click on the pile of coins button. The Midas Coins pokie has an automatic spins feature, and if you press the button that looks like a hurricane, the reels spin in turbo mode.

The paytable, reached with a click on the 3 lines at the top of the controls, lists how much you win at your current bet level whenever 3 or more symbols stop across a line from the left. Prizes range from 4x the bet for card emblems, to 32x for the necklace and Marigold.

The Satyr on reels 1, 3, and 5 pays a win of 2x your bet, followed by 12 free spins of the Midas Coins pokies game reels. These ‘All is Golden’ free games begin with the appearance of a pile of coins to the left of the reels. Any coins in view on the triggering spin will collect in this pile and their combined values start out with a 3x multiplier.

At the maximum stakes, you can win a prize of 500,000.00 playing the Midas Coins pokies game. That’s 5,000x the bet and this can come from enough silver coins in the collection feature, or in the free games round. It’s a medium volatility game where the average return to players percentage is 96.06%.

Our Verdict on the Midas Coins Online Pokie

The Midas Coins pokies game is another solid gold release from Quickspin. It comes with relatively simple graphics, but it still looks pleasing enough across desktop and mobile platforms. The bonus features are excellent, especially the Coin Collection feature which can lead to massive wins in any spin. You’ll be on the edge of your seat as the fifth reels starts to slow down, waiting for Midas to make an appearance and collect all of those lovely multipliers.

See how the Midas Coins online pokie sets the gold standard when you play it at our recommended online casino sites.

How much can I win from the Midas Coins pokies game?

Is the Midas Coins pokie a fair game?

Yes, it is. Like all Quickspin games, the Midas Coins online pokie can be trusted to deliver fair results on every spin, determined by Random Number Generator software. For further peace of mind, it’s fully licensed across several gambling jurisdictions.

Should I always play the Midas Coins pokie at the highest stakes?

You can play the Midas Coins pokie for between 0.25 and 100.00 per spin, so pick a bet level that you are comfortable with. Prize values go up in line with the bet level, but there’s no need to wager the maximum if your bankroll isn’t big enough.

Can I use my Android phone to play the Midas Coins pokie machine?

The Midas Coins pokies game is compatible with smartphones and tablets using the Android, iOS, and Windows operating systems. It looks and plays in just the same way as the desktop version, and you can play without the need to download any apps.

What is the Coin Collect feature of the Midas Coins pokie?

Silver coins, with win multipliers of up to 500x the bet appear on any spin and sometimes several at a time. If King Midas lands on the right-side reel, he collects any coin values in view on the same spin, but if he doesn’t appear, the coins vanish.

How volatile is the Midas Coins online pokie?

What symbols does the Midas Coins pokie use?

The Midas Coins pokie is themed around a famous Greek legend of a king who could turn anything he touched into gold. The King, a Satyr, and Marigold, the King’s daughter, are featured. Poor Marigold has already been turned to gold by her father.

Is the Midas Coins pokie a popular game?

Because it has a hugely popular theme, good looks, and excellent bonus features, the Midas Coins pokie is enjoyed by a huge number of players. Anyone looking for a game based around ancient legends should give it a try at the recommended Quickspin casinos.

Is the Midas Coins pokie similar to any other games?

King Midas is the star of several online pokies. Perhaps the most successful is the Hand of Midas from Pragmatic Play, where wilds multiply wins, and stick in place throughout a free spins round. The Midas Gold pokie by Red Tiger is another option that has a huge following.

When was the Midas Coins pokies game first released?