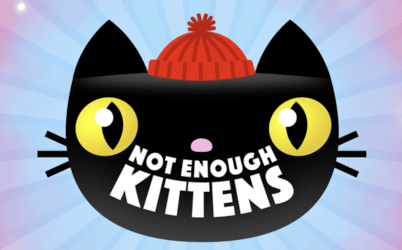 Set in the P.U.S.S. facility where doctors are crazy about cats, this 35-paylines pokie game is full of cute feline symbols and yarn balls. But despite its innocent looks, Not Enough Kittens is a serious pokie game from Thunderkick - one that offers a fair (96.1% RTP) medium-variance gameplay with high betting limits and real money prizes that can go up to 365,000 credits per spin! Read on for a full breakdown of the prizes and bonuses offered in this online pokie and at our top online pokies sites.

Play Not Enough Kittens For Free!
Bookmark It For Later 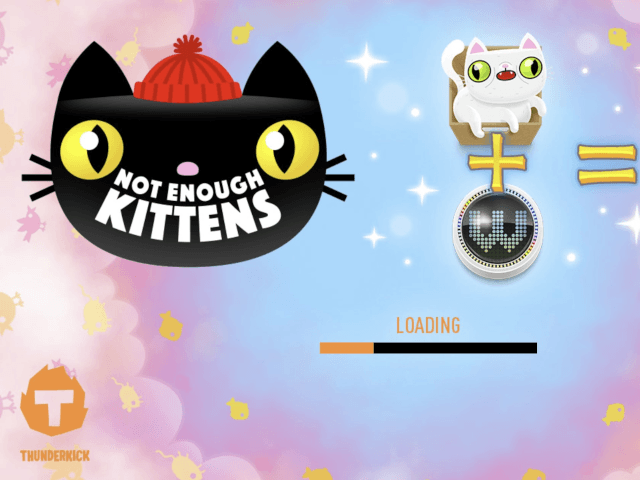 Play Free Demo
Version Directly in Your Browser
Play Not Enough Kittens For Free!
Bookmark It For Later

One of the most original games in Thunderkick’s stunning collection, the Not Enough Kittens pokie offers you a one-of-a-kind playing experience that is hard to forget.

Featuring multiple bonuses and a mobile-optimized design, Not Enough Kittens can always give you an exciting playing session, regardless of what device you want to use. With the help of its doubling symbols, stacked wilds, and free spins bonus games, you’ll have plenty of ways to collect some generous rewards anytime you play for real cash.

Not Enough Kittens – how to play the online pokie

You don’t need any playing experience to enjoy Not Enough Kittens by Thunderkick because the pokie is really easy to use. Before you can begin earning real prizes, you’ll only need to use the chip button on your screen to select your bet. There are 14 bet sizes you can choose from and they range from a minimum of 0.10 credits to a max bet of 100 credits per round. Set your bet anywhere you want it and just press the spin control to get started.

Prizes can be won on 35 fixed paylines by collecting up to eleven different symbols on your screen. To see all the available win lines but also the payouts and bonus features of the game, you need only to click the menu button on your bottom-right and open the paytable. The prizes are always shown in credits and they vary according to your bet size. But what’s unusual about the game is that some of the symbols can also appear as double icons to help you collect bigger wins. Collect any of the yarn balls and you can bank some of the smaller wins that range from 0.20-2.20x your bet per sequence. Collect some of the kittens, however, and those payouts can go up to 100x your stake for a five-of-a-kind win!

Like all pokie machines from this relatively young game provider, the Not Enough Kittens pokie can also be enjoyed on Android mobile devices but also iPhones and iPads at the best online casinos. Since Thunderkick designs all of its pokies with basic controls, the experience you’ll get when using a phone is practically the same as when using your laptop or desktop machine.

Once you enter the P.U.S.S. laboratory and those kittens start rolling up and down on your reels, you’ll get paid every time a sequence of three or more identical symbols lands on a payline. Like with most pokie machines, the winning sequences will need to start at the leftmost reel to activate a prize. But what is different with this game is that some of its symbols can also be doubled, allowing you to create bigger winning sequences that occupy no more than five positions on your screen.

The doubling is activated by the wild symbol, which can also substitute for all other symbols but the scatter and pay prizes of up to 100x your stake when not substituting. When the symbol is collected on a payline along with a cat symbol, it will instantly double both the cat icon and itself. This unique feature allows you to create 10-of-a-kind wins by collecting five doubled symbols on a payline, each counting as two icons but occupying one position. Get five doubled cats in orange, white, and black colour on any line, and you can trigger respective payouts of up to 60x, 75x, and 100x your stake per sequence!

The pokie also has a special scatter symbol which can likewise appear both in double form and as a single symbol. This bonus icon can pay special prizes of up to 25x your stake regardless of whether it is collected on a payline or not. Get three or more of the symbols and you can also win access to the free spins bonus game which can be retriggered fully by collecting additional scatters during the feature.

Giving you medium-variance gameplay that’s seasoned with an attractive symbol-doubling feature, this pokie will offer you a chance to win both small and big prizes while playing for real cash, up to 365,000 credits per spin when playing with the max bet (3,650x your stake). The RTP rate is fairer than what many other online games offer (96.1%) and the hit frequency is not too high to suggest that you’ll rarely see any big payouts during your session.

Not Enough Kittens is undoubtedly a fun pokie machine, as all Thunderkick products are, but that’s not all that this game has to offer. If you’re a fan of medium-variance pokies and you are looking for new and unusual games that offer prizes which are more than solid, Not Enough Kittens will be worth your time.

However, if you’re looking for something with a different volatility, you can also try some of Thunderkick’s other pokies. For a casual, entertaining and low-variance machine you can try the Matryoshka-inspired Babushkas pokie game which offers you a symbol upgrade feature and prizes of up to 390x your stake. And for some high-variance action, you can check out the extraordinary Fruit Warp pokie where the prizes go up to 11,000x your stake (over 1 million credits). Discover even more top games from the studio by visiting some of our highest-rated online casino sites where you can also get an alluring welcome bonus right after you sign up.