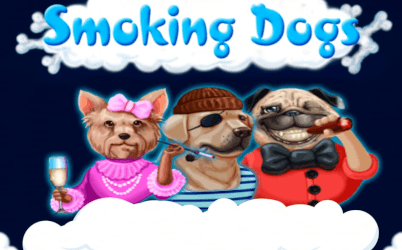 Pair an amusing theme with a mobile-optimized gameplay, 243 ways to trigger prizes, and payouts of up to 270,000 coins that can be taken whenever you play for real money, and Smoking Dogs becomes even more appealing. The RTP is about what we look for at 95.78%, while the medium to high volatility could result in some big payouts. Read our review to get all the info you need to play this fresh Fugaso pokie game. 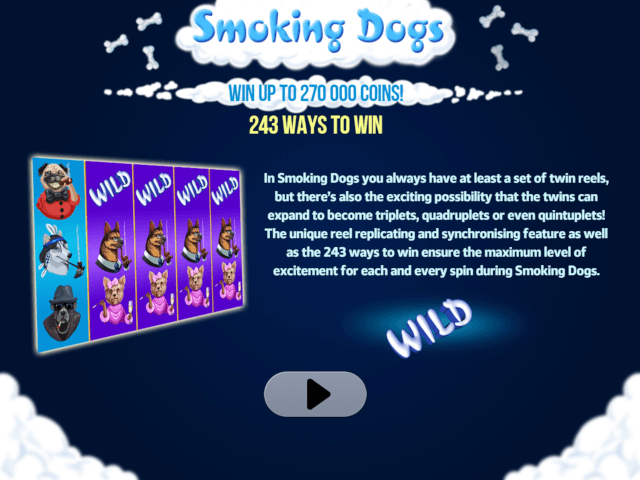 Smoking Dogs is an online pokie game from Fugaso that truly showcases the studio’s talent for designing pokies which can not only be profitable but also very engaging. Featuring tropical music and 5 reels full of funny symbols of smoking dog characters, this game is yet another original product from Fugaso that can entertain you for hours at the best online casinos.

Not one to rely on looks only, Smoking Dogs also has a few exciting bonuses that can attract any punter. Apart from three progressive jackpots, this pokie also features a special Twin Reels feature in the likes of NetEnt’s games but also bonus wild symbols that can help you bank even more payouts.

How to play the Smoking Dogs pokie

The Smoking Dogs pokie is another Fugaso game that will be really easy to play, even to punters who’ve never tried a pokie machine before. The game features two main bet controls that can be found on each side of the screen, one determining your coin value and the other the number of coins per payline you will be betting. Since the game asks for a fixed bet of 25 coins for giving you 243 ways to win, your starting stake will be 0.25 credits per spin or 0.01 per coin. But if you want to bet more, you can also choose between a number of higher bets, up to a maximum stake of 125 credits per round.

Money can be made by collecting a total of eleven dog symbols, all of which offer payouts given in coins. When playing with the minimum number of coins, the payouts range from 3-50 coins for three matched symbols and up to 1,000 coins for a five-of-a-kind. But if you increase the number of coins to the max 10 when playing for real money, you’ll get payouts of up to 10,000 coins per sequence. Just consider that there are 243 different ways in which you can trigger these prizes and you’ll understand how profitable this game can be. Moreover, Smoking Dogs is also equipped with an unusual Twin Reels feature which duplicates reels to increase your chances of winning money, allowing you to get closer to big payouts with each new spin.

For mobile players, Fugaso offers an optimized version of the game which can be enjoyed on any iOS and Android device. The mobile Smoking Dogs pokie offers you the same playing experience like when using a computer, only with fewer buttons on your screen and touch-based playing. To start the game on your phone or tablet, just rotate your device and tap your screen once.

Since there are no paylines in Smoking Dogs, you will need to form sequences of three or more matching symbols on adjacent reels to win a prize, starting at the leftmost reel and moving towards the rightmost one. Out of all dogs featured in the paytable, the luckiest are the pug and the German shepherd as they give the highest prizes of 1,000 and 500 coins, respectively. Getting these symbols to form high-paying sequences shouldn’t be a problem, thanks to the Twin Reels bonus feature.

The Twin Reels is a special bonus which produces adjacent twin reels that are full of the same symbols in order to help you collect more payouts. The feature is active on every spin and it can occur on any of the five reels in the game, not just the middle ones. It can also expand, at random, to cover three, four, or all five reels with the same icons. Together with the wild symbols, this feature can pave the way to some serious money when playing for real cash.

And as another added benefit, Smoking Dogs also offers three jackpot prizes (Maxi, Midi, and Mini) which increase incrementally as more punters bet on the game. Each jackpot offered is higher than the one preceding it and any of the prizes can be won randomly during every round, no matter your stake.

Thanks to its balanced hit ratio, this pokie pays often enough as to not bust your bankroll, although smaller prizes are more frequent than bigger payouts. With volatility on the high side of medium and a 95.78% RTP, players at the top online pokies sites may need a long session to get close to the maximum payout of £270,000.

Another medium-volatility pokie game from Fugaso that is very interesting to play, Smoking Dogs can make fans out of a large number of players. With its broad betting limits, 243 win lines, and payouts of up to 270,000 coins when playing for real money, Smoking Dogs ticks all the marks on our list. So, if you want an entertaining pokie machine that won’t expose you to a huge risk but still pay well, this is your game.

However, if you’re a punter who doesn’t mind taking a big risk for a chance to collect larger prizes, Fugaso also has other pokie machines that are as entertaining but also more volatile to play. Try out the Revenge of Cyborgs pokie or Mummy 2018 for some very engaging high-variance gameplay or go for the Cosa Nostra and Book of Tattoo for a more traditional but just-as-risky playing experience. You can check out any of these pokie games at our trusted Fugaso casinos, where you can also find dozens of other popular pokie machines from more of the industry’s leading software makers.