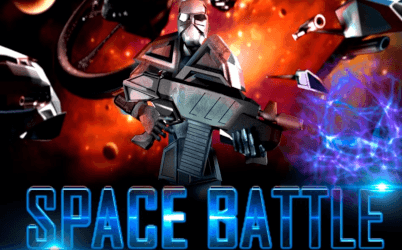 Other than great looks, Space Battle also offers a few alluring bonuses to its punters to allow them to earn more by spending less. Play and get to enjoy free spins bonuses with payout multipliers but also sticky wilds and respins that can turn an unsuccessful spin into a profitable round. Learn more about the bonus features, controls, the 95.99% RTP and payouts of the pokie by reading our easy guide of the new Fugaso pokie.

Space Battle is a new 20-paylines pokie machine from the creative studio of Fugaso that proves pokies don’t’ have to be overly complex to be entertaining and profitable. Featuring sleek graphics of spaceships, warriors, and exploding space stations, Space Battle is a game for any fan of science fiction pokies. When played for real cash, this casino game can offer real prizes of up to 1,000,000 coins, which can be claimed on any type of device, mobile or computer.

How to Play the Space Battle Pokie Game

Space Battle is not a very complex pokie machine, which makes it great for both beginner punters and experienced players. The screen is equipped with a number of intuitive controls you can use to control your playing, including auto and manual spin controls and buttons for setting up your coin value and the number of coins per line. The smallest amount of cash you can spend per round is only 0.20 credits while the max bet is a high 200 credits per spin.

Like most Fugaso pokies, Space Battle features fixed paylines that you can see by hovering over the numbers at the sides of the reels. Prizes can be collected by 13 different symbols, some of which only pay money while others also activate bonus features. When playing with the minimum number of coins, the prizes vary from 5-5,000 coins per sequence, depending on the type of symbol you collect. But stake 10 coins when playing for real money and you can win payouts that are ten times higher. Moreover, what’s unusual about this pokie game is that you may also get to trigger a random respin after any payout and bank even more money without paying for a second spin.

If you want to play Space Battle by Fugaso on a mobile device, you will be able to enjoy the same smooth experience as when playing on a laptop or a desktop computer at any of our top-rated mobile casinos. Fugaso makes all of its pokie games by using HTML5, which makes them playable on both Android and iOS devices. Space Battle is no exception and it can be enjoyed on any phone and tablet but only in landscape mode.

Space Battle pays just like any pokie machine. To collect a prize, you’ll need to form sequences of matching symbols on a payline, from left to right. The only difference is that this pokie pays even when you collect two matching symbols and not just three or more. The most valuable icon in the game is the trooper wild, which not only substitutes for all symbols bar the scatter but can also give you payouts of 25-5,000 coins when you play the game in a real money online casino site.

Apart from the wild, another symbol that can add more value to your rounds is the Space Battle scatter symbol. Like all scatters, this symbol can trigger prizes no matter its position. If you collect two of the icons during a round, you can win a prize of only 1 coin. But if you collect three or more, you can win a bonus of 10 free spins plus a prize of up to 100 coins. The free pokie spins bonus games are played with random wild symbols that can appear during every spin but also payout multipliers of up to 9x. As long as you keep winning on each new spin, the multiplier meter will keep increasing and so will your payouts during the feature.

And yet another extra you can enjoy in the Space Battle pokie is the Space Sight bonus, which is activated by a space station symbol appearing on any reel. If the feature is activated, some of the spaceships sitting next to the reels will pick a target on the screen and fire a shot at it. If the shot hits the space station on its way, you’ll win one free respin with a sticky wild symbol.

Space Battle is a simple, medium-volatility pokie machine that can be played on a wide range of budgets and pay considerable prizes when playing with real cash, up to a million! The RTP is around where we like to see it for online pokie games too, at 95.99%.

This pokie game can appeal to many types of players, no matter if they are high-rollers or players looking for cheap, straightforward games. If you don’t want risky online pokies that pay only small returns, Space Battle is an interesting option to explore that can give you the best of both worlds. However, don’t expect to see large jackpot easily on your screen because this pokie still has a high hit ratio, which means you’ll likely see smaller payouts more often than big returns.

On the other hand, if you do want to play riskier pokie machines that can provide you with the same level of entertainment but also offer you a chance of bigger wins, you can check out any of Fugaso’s high-volatility pokie games. Cosa Nostra, Mummy 2018, Carousel, and Revenge of Cyborgs are all great games from the studio that are known for their volatile payouts but also their immersive gameplay. Make sure to check out our top-ranking Fugaso operators for a chance to try any of these games and get yourself some free bonuses right after you sign up.