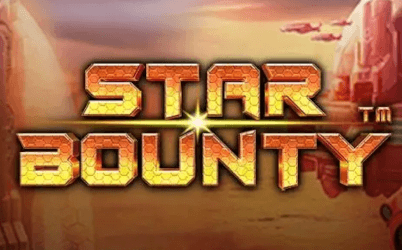 The Star Bounty by Pragmatic Play pokie machine is a sci-fi epic, filled with heroes and villains across 6 reels, 4 rows of symbols, and 4096 ways to win. Join the adventure on PCs or mobiles at the best online pokies sites and you can unlock features such as tumbling symbols, random wilds, and up to 24 free spins. A high volatility can lead to vast wins of up to 25,000x your stake, or 2,500,000.00 at the maximum bet level! The average returns of this thrilling pokie are a generous 96.6% at our top-ranked online casinos. 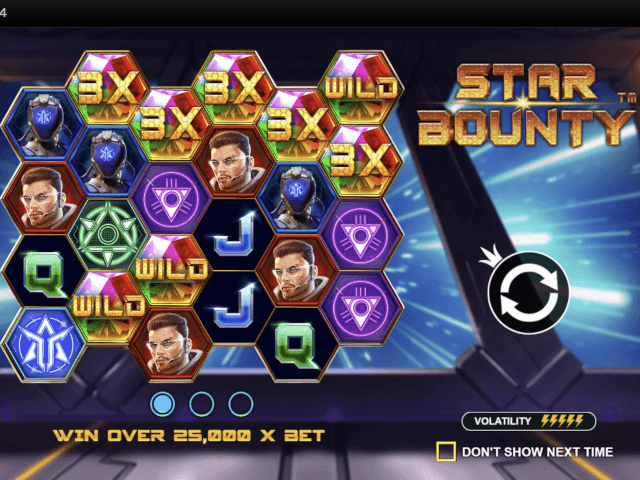 Star Bounty has an unusual hexagonal layout, which adds to the futuristic theme and style. Symbols include playing card icons J through to A, 4 strange emblems which pay mid-range prizes, and 4 characters.

The reels sit against the backdrop of a city, where spaceships fly among the huge towers and a robot overlooks the whole scene. It’s a great-looking game and continues Pragmatic Play’s reputation for delivering pokies with high-end graphics.

Winning symbols vanish and new ones drop down to replace them, hopefully leading to new combinations. A multi-coloured wild symbol helps out by acting as others, and a Missile Wild feature sees extra wilds blasted onto the reels. During a free spins feature, wild can boost wins many times over. It’s here that you could win a colossal 25,000x your total bet.

All of the style and features work in the same way across PCs, iOS, Android, and Windows mobiles.

How to the Play Star Bounty Online Pokie

Click the Plus and Minus tabs to either side of the Spin button to adjust your stakes from a low limit of 0.20 per spin to a maximum of 100.00. It’s a wide bet range and most players will find a level to match their budgets. Don’t forget that this is a highly volatile game, where you could see longer than average gaps between winning spins, so set your stakes accordingly.

Other buttons on the easy to use control panel activate Autoplay and Turbo modes, while the ‘I’ opens up the Star Bounty pokies game paytable. This is a 4096 ways to win game where you need to land matching symbols in any place on reels from the left to win at the best online casinos.

Any symbols that create a win will vanish and new ones drop from above to fill the empty spaces. With a little luck, this creates new wins for you, and that leads to another tumble of symbols. There’s no upper limit to how many wins and tumbles you can get one after another.

The colourful wild symbol stands in for others if needed, and there’s a second Missile Wild that triggers a quick in-game bonus. The missile shoots extra wilds into random places on the reels, helping you to complete more combinations.

A Free Spins symbol in 3 or more places launches a respins feature. The triggering symbols lock in place as the rest of the reels spin and any new Free Spin symbols also lock.

The respins carry on until no Free Spin symbols appear, or all 24 spots on the reels fill with the symbol. You then enter a free games round and have as many bonus spins as you have triggering symbols, in other words, up to 24. Wild symbols during the free game can have 2x or 3x multipliers attached to them and if several wilds help to complete a win, their multiplies combine together. Regular and Missile wilds also land during the free spins round.

With the prefect blend of high value symbols and wild multipliers in the free games, it’s possible to win 25,000x your stake, which is way more than most pokies can offer. At 100.00 on the spin, it equals a prize of 2.5 million.

This is a high volatility game, where the long-term average payback percentage is 96.6%.

The exciting sci-fi style and theme will appeal to many players, and the gameplay is just as engaging as the looks. Cascading symbol in each win can lead to multiple payouts in a row, although the high volatility tends to limit how many you get before a non-winning mix of symbols appears.

Missile wilds and free spins will help you to claim more wins, and the potential is always there to grab a massive payout from the wild multipliers during the bonus round. Load up this epic game on your PC or mobile, and be sure to collect the best bonuses from our recommended online casino sites.