Play Thunderstruck II For Free!
Bookmark It For Later 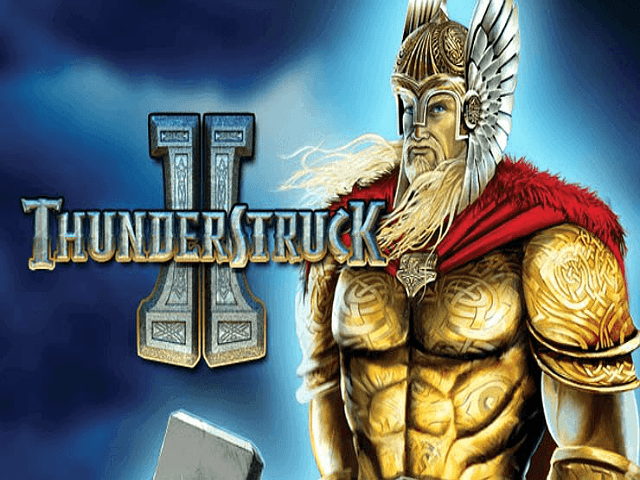 One of Microgaming’s most popular slot games, the Thunderstruck II slot has been winning over players ever since it was first released. Inspired by Norse mythology and legends of Thor and Loki, this mobile-friendly casino game offers you a medium-variance gameplay, low betting limits, and a very solid 96.65% RTP. With progressive bonuses up for the taking, 243 ways to win, and massive prizes that can reach 2,400,000 coins per bet, Thunderstruck II by Microgaming is a game that’s really hard to resist.

What makes this slot attractive is not only its special mechanics but also its many bonus features. Win multipliers and random wild features will ensure you get proper rewards during the base game while four types of free spins bonuses with a ton of added extras will give you a chance to get closer to that attractive jackpot prize. Learn all about the extra features and prizes of the Thunderstruck II slot machine when you read our thorough review below and get ready for some electrifying wins.

A very straightforward slot to play, Thunderstruck II can be enjoyed by any player, no matter how experienced they are. With a fixed bet of 30 coins, the minimum you can spend on a round while playing with real cash is only 0.30 credits (0.01 per coin), despite the game giving you a total of 243 win lines. Higher bets are also possible, although not too high as the max bet is set at only 15 credits per round (0.05 per coin x 30 coins x 10 bet level).

Before you start playing, you may want to access the game’s paytable from the menu in your top-left corner to check out all the available prizes. The slot uses 12 symbols which are split into six low-paying card symbols and six picture icons which pay better rewards. The card symbols can pay between 5 and 150 coins on the first bet level and up to 1,500 coins on the 10th level. The picture icons offer bigger rewards, ones that start at 15 coins per sequence and go up to 10,000 coins when playing with the highest bet level. And thanks to the special mechanics in play, you’ll get hundreds of ways to trigger any of these wins during every new round.

Thunderstruck II can also be played on Android and iOS mobile devices by players who prefer gambling on the go. The slot works great on nearly all smartphone and tablet models compatible with HTML5 and it offers the same screen layout and controls on both desktop and mobile devices.

Like all 243-ways slot machines, the Thunderstruck II slot uses no paylines. Instead, the game pays prizes whenever three or more matching symbols are collected on three or more adjacent paylines, no matter their position. The only exception to this rule is the bonus scatter symbol, which can trigger wins and the free spins bonus game even if it is collected on non-adjacent reels.

Another special symbol the game features is the logo wild symbol, which can substitute for all the available symbols from the paytable (apart from the scatter) to get you paid. The wild can also double any payout it triggers but also award the biggest prizes in the slot when not substituting, up to 10,000 coins per sequence. And when there aren’t enough wild symbols on your screen to bring you some good payouts, the Thunderstruck II slot may also randomly activate its Wildstorm bonus and turn up to five reels on your screen into wilds.

Even better than the Wildstorm feature is the progressive free spins bonus game which can be activated by collecting at least three scatter symbols. Three-five of the scatters give you a first-level bonus of 10 free spins plus a cash prize of up to 200x your stake (60,000 coins). The first-level bonus, called Valkyrie free spins, is available on the first four triggers and it is played with 5x multipliers for your prizes. Trigger the free spins for the fifth time and you can progress to the Loki bonus where 15 free spins and a special wild transformation feature is offered to you. And if you unlock the free spins for the 10th or 15th time, you’ll get to even bigger free spins rewards (up to 25 free spins) but also additional features like rolling reels and better prize multipliers.

There’s a reason why Thunderstruck II is still one of the most loved Microgaming slots. By designing a fun game with a medium volatility, betting limits fit for all, and some amazing payout opportunities, Microgaming has managed to create a slot that can appeal to anyone. Whether you like affordable games with plenty of bonuses or are looking for a modern slot that will reward your long session with big wins, Thunderstruck II will be a great match either way. With a 96.65% RTP and prizes of up to 2,400,000 coins, this slot is unquestionably one of the top choices to consider when playing with real money.

However, if you’re more into high-variance games that offer you bigger payouts with an added dose of risk, you can also check out some of the studio’s volatile slot machines. Break Da Bank Again is one of the studio’s biggest hits, giving you similar betting limits and a free spins bonus with 5x multipliers. And for something more rewarding at an online casino, you can instead try the Mega Moolah Isis which not only gives you big wild payouts and free spins with multipliers but also four progressive jackpots, the highest of which has paid many life-changing prizes so far.