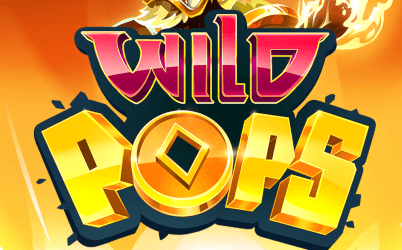 The second game in the Yggdrasil 'PopWins' series, WildPops will soon be hitting top online casinos. A staggering 33,614 ways to win await, as well as some amazing gameplay features. Before this new pokie game hits the shelves, check out or WildPops preview, where we go over what everyone can expect before the game is released!

Following on from the success of the PopRocks online pokie, Yggdrasil will be adding another game to the PopWins series, in the form of WildPops. The Wildpops online pokie is likely to have a very similar 'Pops' feature, though the multiplier we'll see in this upcoming win-both-ways pokie game will be a little different.

The look of the symbols will appeal to many, as they are represented by Chinese-themed animals and letters, which can be found in a number of popular online pokie games.

An expanding gameboard and up to 33,614 ways to win can be a lot to get your head around, so the paytable will need to be checked out once WildPops is released. The usual Autoplay and mobile accessibility you will find with all top online pokie games will be available here though.

One thing we can confirm is the bet range for WildPops. The lowest amount per spin is 0.20, while the maximum is 50.00, so this pokie game should suit all budgets.

If you're unfamiliar with Yggdrasil's new PopWins feature, you're in for a treat. Symbols from winning combinations from a spin leave the gameboard and are replaced by two new symbols. This occurs after every 'Pop', meaning the grid can expand to become 7 columns high. For every 7 Pops, the multiplier for all winnings from that spin increases by +1x.

While the game is not expected to come with traditional free spins bonuses as we know them, there will be a bonus round. When the gameboard is expanded to 7 columns high, the player received three lives. Instead of the board returning to normal if there are no winning combinations, one of the three lives will be used, giving more chances to win big money.

If that's not enough, there will also be expanding wilds. Exactly how they'll work is unknown for now, but it's likely they will land on the board after a set number of winning Pops.

An RTP of 96.2% is about standard when it comes to online pokie games, and that's what we can expect to find in WildPops. The maximum payout is expected to be around the half million mark, but that hasn't yet been confirmed.

WildPops Be A Good Online Pokie?

We can't wait to check this pokie game out when it's available at top online casinos. With so many paylines in play and 'win-both-ways' mechanics, there are sure to be some big wins when it can be played for real money.

When is the WildPops online pokie Released?

WildPops is currently scheduled for release on July 9th, 2020.