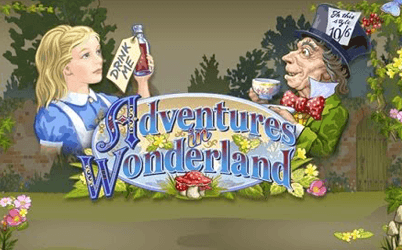 Lewis Carroll's masterwork, Alice's Adventures in Wonderland, has inspired many adaptations, but few can be as profitable as the Adventures in Wonderland slot game designed and provided by Playtech's famed subsidiary, Ash Gaming. The 5 reel, 20 payline video slot features generous bonus games as well as a hefty progressive jackpot.

The slot game's incredible graphics feature all the familiar characters loved by Alice in Wonderland fans the world over. Join the Cheshire Cat, Tweedle Dee and Tweedle Dum, the smoking Caterpillar, and the King and Queen of Hearts as they appear all throughout the game.

But be on the lookout for the more central characters - Alice (Bonus), Mad Hatter (scatter) and White Rabbit (wild) - as they represent all the bonuses each players is looking to capitalize on. Aside from the noticeable movie/novel connections, this progressive slot is truly an elite offering with its ever-growing jackpot, endless bonus features, and customization settings - staples of any successful progressive.

About Adventures in Wonderland Slot Game

As you'd expect from such whimsical and classical subject matter, the slot has a nostalgic look. The reel and background artwork, drawn from Carroll's tale, both have the feel of old-fashioned illustrations. The music shrouds the game in an air of mystery, and even the console has the look and feel of an old arcade machine.

But while the game appears to be rooted in childhood nostalgia and the past, the prizes and gameplay are definitely adult-sized and up-to-date. A few years ago, one Henrik A. won a progressive jackpot of £591,131, yet what seemed just after the announcement, the slot's bonus climbed back up to almost £260,000 - a sign of value for a progressive like this. Besides the progressive jackpot, though, there are plenty more profits to be had.

The format is a five-reel, 20-line slot in which users can stake between 0.20c and £200 (€200 / $200) per spin for a jackpot of up to 10,000 coins. As well as the standard 'Drink Me' wild symbol, there are two additional bonus games. The first is launched when the free spins scatter, represented by the White Rabbit, appears three times on a single spin.

This awards players with a random number of free spins during which the rabbit will trigger wild symbols. The total amount won so far will appear at the bottom of the screen. The second game occurs when three, four or five Mad Hatter scatter symbols appear anywhere on the reels, marking the start of the Tea Party bonus game.

Here, players select a guest to pour tea for. The guest then drinks, and as they do, a cash bonus counter climbs; the longer they drink for, the more the players win. Players have several chances to pour the tea and if a guest adds sugar to their cup, the progressive jackpot is awarded. It's that simple.