Age of the Gods: Goddess of Wisdom Online Slot 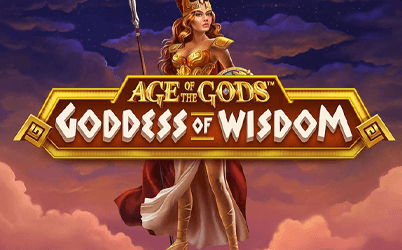 Game Provider: Playtech
Play Age of the Gods: Goddess of Wisdom For Free!
Bookmark It For Later Age of the Gods: Goddess of Wisdom Review

The Age of the Gods: Goddess of Wisdom online slot is the latest in the Age of the Gods series developed by Playtech. The five-reel, 20-payline progressive slot climbs the heights of Mount Olympus to dance with the mythical Greek Gods. The Goddess of Wisdom Athena takes centre stage, while the reels are set between marble columns decorated in gold.

It is one of eight games in the progressive jackpot series that has re-introduced players to the mighty gods and titans including Apollo, Poseidon, Hercules and King of the Gods, Zeus. The first games were launched by Playtech in May 2016, and the software provider has added several new titles to the channel.

Fans of Playtech casinos will know that with the Age of the Gods: Goddess of Wisdom slot they can expect a well-polished game based on larger-than-life characters. The company has also recently developed slots for top New Jersey casino sites and top Pennsylvania casino sites based on DC Comic characters including a series tied to Adam West’s 1960s Batman TV show, with games such as Batman and Catwoman Cash, Batman and Batgirl Bonanza, and Batman and the Riddler Riches.

About Age of the Gods: Goddess of Wisdom Slot Game

As soon as players start the Age of the Gods: Goddess of Wisdom slot, they’re transported to Ancient Greece to climb to a temple on Mount Olympus in an attempt to meet Athena. They’ll seek to lay eyes on her fabled beauty and learn from her words of wisdom so they can see one of the four progressive jackpots that are randomly triggered during the game.

Playtech’s team of developers has continued to impress with the latest title in the Age of the Gods series, with seamless animation, blockbuster visuals, and a thunderous score. This is all capped with the potential to win a life-changing progressive jackpot. All this is why you'll find this slot featured across all the top Pennsylvania slots sites.

As well as the progressive jackpot, the Age of the Gods: Goddess of Wisdom slot machine offers multiple ways of winning big during the game itself. The highest-scoring symbol is the shield, marked by the head of the Gorgon Medusa. In the mythological tale, you’d be turned to stone for looking her in the eye, but here Medusa’s head will grant you a win of 5,000-times the initial bet if landing a full payline.

Athena herself is the game’s wild icon. She appears on the middle three reels only, and can be substituted for all symbols except the owl scatter. The owl carries a scroll that heralds the Battle Game bonus feature, and players will enter this if three or more of these winged messengers appear on the reels.

Once the bonus Battle Mode engages, players must defend the city from attack. Athena will grant you one of three bonuses to choose from – ten free spins, seven free spins with a times-four multiplier, or 14 free spins with times-two multiplier. During the free games, all of Athena’s wilds will fill up the full reel they appear on. Age of the Gods: Goddess of Wisdom is clearly not just another slot game so don't miss the action!