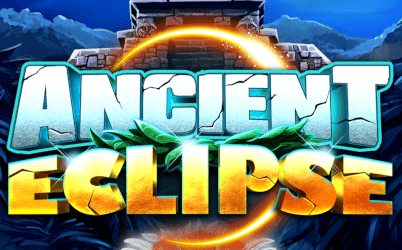 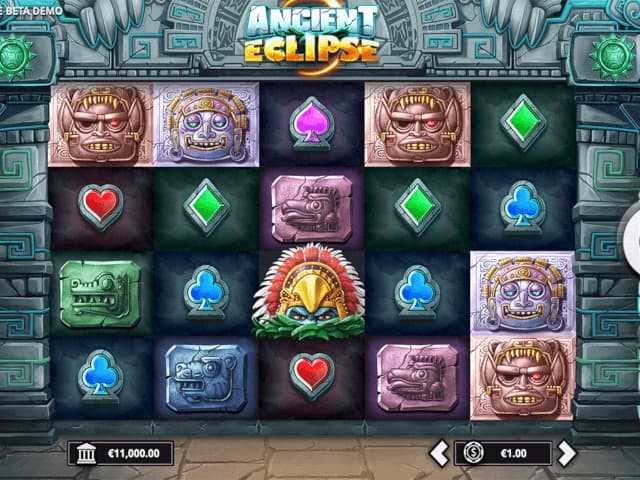 The Ancient Eclipse online slot plays out over 5 reels, and 4 rows, combined with 50 paylines. It’s a desktop and mobile-compatible game from Yggdrasil themed around the Mayan civilization. Age-old temples surround playing card suit symbols and stone carvings. Look out for the Sun and Moon at our recommended Pennsylvania slots sites and the top New Jersey slots sites, as these transform into valuable wilds and win multipliers.

Free spins with sicky wild symbols can build prizes worth up to 4,595x your wager, or 459,500.00 if you play at the highest stakes. Ancient Eclipse is a medium variance game with average returns of 96.53%.

How to Play the Ancient Eclipse Slot Machine

Yggdrasil and Bang Bang Games combine forces to bring the Ancient Eclipse slot to iOS, Windows, and Android mobiles, as well as desktop platforms. The attention to detail is impressive, with intricately carved Mayan gods, and a chief in his feathered hat among the symbols. More carvings decorate the sturdy stone columns and roof that surrounds these emblems of a long-gone empire.

You won’t encounter any issues getting started, as the Ancient Eclipse slots game uses straightforward controls and has a wager range to suit most players. Click the left or right arrows either side of the wager level indicator to select a wager from 0.20 to 100.00 per spin. An autoplay options spins the reels for between 10 and 250 times, although be sure to set a loss limit beforehand.

You should also review the paytable before playing, and it’s easily reached via the 3 little lines at the top of the game. It has a full breakdown of how much each symbol pays when crossing 3 or more reels from the left, on any of the 50 lines. The most valuable symbol is a bright red gem, and you win 1.3x, 3x, or 5x your total wager when it lands on 3, 4, or 5 reels.

A golden Sun is the wild symbols here and it has the power to substitute for all except the feathered headdress to complete extra wins.

The Ancient Eclipse slots game has a special Sun Frame feature. Whenever the Moon appears, it transforms that symbol position into a Sun Frame, which remains locked in place. Normal gameplay continues, but any further Moons add more and more Sun Frames to the grid. If the Moon lands in a Sun Frame that’s already in place, it triggers an Eclipse feature, where all frames transform into wild symbols.

Should you have more than a single Moon in view on the triggering spin, a win multiplier equal to the number of Moons applies to any win. A win isn’t actually guaranteed from this feature, but we found that you will usually pick up a decent prize from an Eclipse. Frames vanish after the event, and you need to start building them up again.

The headdress symbol in any 3 or more places will award 12 Locked Frames Free Spins. Any wilds on the spin that started the round will turn into Sun Frames and remain on the reels for the rest the round. Any new Sun Frames also stay in place until the end of the free games, and you get 1 extra spin whenever the Moon lands, but doesn’t trigger an Eclipse.

With enough Frames and multipliers, you can claim a maximum win of 4,595x your wager. That adds up to 459,500.00 at the highest stakes, which is good for a medium volatility slot like Ancient Eclipse. The average payback percentage of 96.53% is also excellent.

Does the Ancient Eclipse slot put others in the shade? Not quite, but it’s an excellent game, with a highly unusual feature. The excitement builds as more Sun Frames appear on the reels, and you actually want to delay the Eclipse feature for as long as possible, to get the maximum number of wilds when the stars line up and it triggers.

Free spins with sticky Frames can make it much easier to win big prizes, although you can’t retrigger the whole round and instead get just 1 extra spin if the Eclipse isn’t triggered. It’s a decent compromise and you should have some nice payouts by the end of the round anyway. Be sure to unlock these celestial bodies at the best Pennsylvania and the best New Jersey slots sites.

Is the Ancient Eclipse slots game available at recommended casinos?

Take a look at our guide to the best Yggdrasil online casinos. You’ll find the Ancient Eclipse slot machine at these recommended sites, along with the rest of this hugely popular range. The top casinos also have some fantastic welcome bonus deals waiting for you to collect.

What is the Ancient Eclipse slot themed around?

The Ancient Eclipse slot machine is themed around a long-lost Mayan temple. The symbols include stone effect carvings of birds, alligators, and Mayan gods, along with the Sun, Moon, and feathered headdress bonus symbol. It’s set deep in the jungles of South America.

What is the Eclipse feature of the Ancient Eclipse slot?

The Eclipse feature sees Sun Frames placed around reels every time the Moon symbol appears. These frames stick in place and if the Moon lands in the same position again, all frames turn into wild symbols. If more than one Moon is in view, a multiplier is applied to any win.

Does the Ancient Eclipse slot machine have a free spins round?

Yes, it does. A feathered headdress symbol in at least 3 places will award 12 free spins. If any wild symbols are on the reels at the time, these turn into Sun Frames that stay in place throughout the round. Moon symbols trigger the Eclipse feature whenever they land in a frame.

What’s the most that I can win from the Ancient Eclipse slots game?

Does the Ancient Eclipse slot machine have a good return to players percentage?

The long-term average payback percentage of the Ancient Eclipse slots game is 96.53%. That’s a generous figure for a medium volatility game like this and means that you can play the game for longer with less risk to your bankroll.

Can I play the Ancient Eclipse slot on a mobile?

The Ancient Eclipse slot game has been designed from the ground up to work across desktop and mobile platforms. Whether you have an Android, iOS, or Windows-powered device, it will work perfectly, without any changes to the gameplay, features, or rewards from the desktop version.

Do I need to download software to play the Ancient Eclipse slots game?

No, you don’t. You can play the Ancient Eclipse slot directly from a browser without having to download any casino software at all. It won’t take up any space on your PC or mobile memory,

Are there any games similar to the Ancient Eclipse slot?

The Aztecs and Mayans are a popular topic with game developers and players worldwide. Games similar to the Ancient Eclipse online slot include Gonzo’s Quest from NetEnt, which features impressive CGI graphics, and Aztec Gems Deluxe, from Pragmatic Play.

The Ancient Eclipse slots game comes from Yggdrasil and joins hugely popular slots like Valley of the Gods and Vikings go Berzerk in their collection of desktop and mobile games. It was co-developed with the independent Bang Bang Games studio.