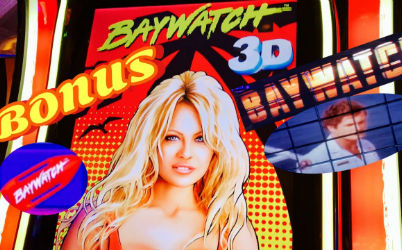 Baywatch was the hottest TV show of the 1990’s and you can re-join Mitch Buchannon, CJ Parker and the gang in the stunning Baywatch 3D video slot that comes from International Gaming Technologies (IGT). Using actual photos of the cast as symbols, along with iconic red floats, yellow pick-up trucks and big waves, this stunning-looking game has become a massive hit at land-based casinos, but a 2D version is just as popular at online and mobile casino sites that carry the IGT range.

Saving lives on the beaches of Los Angeles is a job that requires teamwork and IGT have cleverly integrated this into the gameplay, giving you extra payouts when the lifeguards join forces. A free spins bonus game with higher payouts, wild substitutions and the link to a hugely successful franchise are just some of the attractions. You can also win up to 150 times your stake, or 112,500.00 at the maximum stakes.

If you can’t get to a physical casino site to play the Baywatch 3D slot machine, just go online to play the 2D game. Playable across desktop PC’s, iPhones, iPads and Android smartphones and tablets, you’ll be able to take a dip into the Baywatch slot machine at a selection of recommended IGT casinos sites, or just test the waters on our free version right here.

IGT are recognized as one of the top developers of slot machines and through their decades of experience, bringing out a range that suit low-stakes players and high rollers alike. The control panels of their games are designed for ease of use and to start playing the Baywatch 3D slot machine, or its online counterpart, you will only need to adjust the amount wagered on each payline, then click to spin the reels.

The bet range varies from a tiny 0.25 per spin to a massive 750.00, which means that whatever the size of your bankroll and whatever your expectations of winnings may be, you will find a stake that’s ideal for you. A button to the right of the control panel starts an Autospin function which plays out as many games as you want, stopping when a feature is triggered, or pre-set win or loss limits are reached. Players also have the option of having the Baywatch soundtrack playing along as the reels spin, and it really helps to bring the thrills of the TV show to casino floors, or desktops and mobile devices.

The symbols stand out in a 3D style against a tropical beach, where waves are lapping gently onto the shore. Even the online version has symbols that seem to pop out from the screen. While the lower-value symbols are the tools of a lifeguard’s trade, the top prizes are paid out by pictures of Pamela Anderson, David ‘The Hoff’ Hasselhoff, and Yasmin Bleeth, who played Caroline in the series.

Wins are paid out as multiples of the amount staked per payline, and of course Mitch, as the star of the show, pays the most, returning 100x the line stake when he’s seen right across a line. A big wave is the wild symbol which acts as others to complete combinations when needed although it will only be seen on the middle three reels. A special Tidal Wilds feature can be awarded at any time, with the wave expanding over whole reels, or stretching to the right to fill two reels at a time.

The Baywatch slot game gets really interesting when the lifeguards are teamed up at random, Enhanced wins are paid out when Mitch or Cody team up with CJ or Caroline. They become joint symbols which pay more than double the base rates for any lifeguard on their own. It’s a randomly-awarded feature in standard spins, but when you trigger the free spins bonus round, all lifeguard symbols team up.

The free games start when any three or more bonus symbols are seen. This is the iconic image of a lifeguard tower against a setting sun. It’s not just the extra payouts from teamed lifeguards that makes this such a special feature though, as Tidal Wilds and Teamworks will be in play throughout them.

The bonus symbol pays an initial prize of twice the total bet and then players pick a male and female lifeguard to help them out during the round. Mitch and CJ will add stacked lifeguard symbols to the reels during the feature to boost the odds of landing winning combinations, while Cody and Caroline will trigger a greater number of spins. Only the chosen lifeguards will be on the reels, along with the lower-value symbols, so it’s a lot easier to claim prizes during this exciting feature.

With the online and off-line versions being almost identical, it’s totally up to players how and where they access this thrilling slot game. The number of people who have a land-based casino on their doorstep is pretty small compared to those of us who prefer to play online, but apart from some 3D effects, you lose nothing of the gameplay or features when you load up this slot machine at online or mobile casino sites.

Although the original series ended in 1999, spin-off shows, and a 2017 movie have ensured that Baywatch remains a popular franchise and the slot machine has been a major hit for IGT. Check out the gameplay and features on the free Baywatch slot machine on these pages or jump right into the game at our recommended IGT casinos.

Not all online casinos are the same and we have only selected the top ones, so you won’t need to navigate the choppy waters of the casino or slots world when you play at one of our chosen sites.