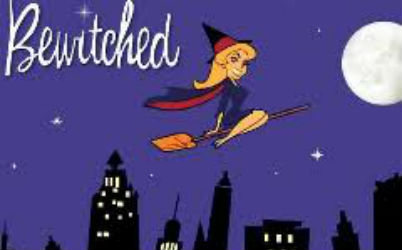 Bewitched is one of the best-loved TV shows of the 1960’s and casino games developer IGT have turned it into one of the top slots around the world. The magic starts as soon as you see this game for the first time, as the five reels are housed in a sleek cabinet, topped of with pictures of Samantha, her cousin Serena and the famous cartoon image that flew across TV screens in the title sequence. The catchy soundtrack plays along, and if that doesn’t attract the attention of fans from across the casino floor, we don’t know what will.

Once you have found the Bewitched slot machine, you won’t be disappointed with the exciting gameplay and features. With 1,024 ways to win running across the game, players are sure to land lots of prizes when the symbols line up, while the bonus rounds include some spellbinding features like win multipliers that build up to the side of the reels, a fortune wheel and progressive jackpots. Unfortunately, we can’t wave a magic wand, or even wrinkle our noses to make this slot game appear at online casinos, as it’s only been made available to land-based sites.

It’s easy to confuse this game with the Bewitched slot machine from iSoftBet. Although this game isn’t directly based on the hit TV show, it’s a high-quality slot that can work its magic at some highly-recommended online and mobile casino sites. We’ll take a closer peek at this game in a bit, but right now, let’s if Samantha, Serena and Co. can pull a virtual rabbit out of a hat and cast a spell over us.

Getting Started On Bewitched

You’ll feel transported right back to the 1960’s with this game, where even the colors on the reels and design of the symbols match the style of the Bewitched TV series. Although playing card symbols will frequently land across the reels to create winning combinations, the higher-paying icons include a witch’s hat, old-fashioned TV set and a black cat. This game features one among the highest-paying symbols.

The 1,024 ways to win format is a popular alternative to standard paylines. You win a prize whenever matching symbol stop in any places on adjacent reels from the left side. It makes the game relatively low-volatility, with lots of winning combinations appearing. That also means that you can’t just activate a few lines for a tiny stake. All of the game is in play and you will need to wager at least 0.50 to get started. The maximum stake is 50.00, so most people will find a bet level that suits their budgets.

Like most slot machines at land-based casinos, the control options are a bit limited with no autoplay or fast-spin mode. Although, you have the choice to adjust the volume to your own preference. About the only other control button is the one below the reels that opens up the paytable. Click it to see what each line of matching symbols will be worth and how the special features function.

As symbols land across the reels, you’ll be collecting steady wins from the card icons and picture symbols, but what you really want to look out for is the spell book. Whenever this stops in any place, it will open up and add a multiplier value to the top of a bottle of potion to the right side of the game. This multiplier stays active for the next four spins, boosting the value of any wins. But if another spell book appears while it’s still active, another multiplier is added to the bottle and the two are combined. It’s possible to have four multipliers in the bottle, all added together, which is the perfect ingredient for some huge payouts.

Other special symbols include the wild, which acts as others if it can then complete combinations, and a bonus symbol that starts a 'Book of Spells' feature. This plays out on a big screen above the reels, and once triggered, you are guaranteed to win a prize. A giant wheel of fortune, that looks like a pink and purple flower, will start spinning. Once it stops, the prize on whichever section is resting against a pointer will be awarded. Most of these are simple win multiplier prizes, but the Broom, Brew, Serena and Samantha sections of the wheel will pay out progressive jackpots. These aren’t huge prizes but can still be worth hundreds of dollars for a 0.50 stake.

The music, characters, cartoon clips and images from the actual show will appeal to fans. Even those players who never grew up watching Bewitched should get a thrill from the frequent winning spins, especially when the multipliers are boosting payouts and when bonus wheel is triggered.

We mentioned the Bewitched slot machine from iSoftBet, so let’s take a closer look at this game, which can be played on iPhones, iPads and Android devices, as well as on desktop PC’’s. The colorful cartoon symbols of this five-reel, 15-line slot include two witches and you’ll need to choose one of them to help you out against the other.

Features include a pick-a-potion round, which takes you to a free spins game or a progressive jackpot feature. In the free games, your chosen witch will fight to award you the maximum number of bonus spins. If she loses, you still get a few consolation spins, but either way, win multipliers are claimed as soon as the bonus begins. Which witch will make you rich? We can’t tell, but head over to some of the selected Pennsylvania slot sites or New Jersey slot sites that carry the iSoftBet range and you can soon find out.