Day of the Dead Online Slot 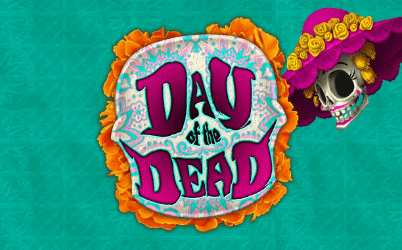 Game Provider: IGT
Play Day of the Dead For Free!
Bookmark It For Later
Demo Not Available, Use The Offer Below To
Play for Real Money Now!
Loading...

Themed around the famous Mexican event that takes place around Halloween, the Day of the Dead is a vibrant, colorful slot machine from IGT. It’s become a major success, partly due to the impressive design features, partly due to the innovative reel layout and adoption of the MultiWays Xtra format, which can lead to some huge wins. It could also of course, be down to the fact that this is a mobile optimized slot machine, which you can enjoy at a selection of recommended casinos via desktop PC’s, Android and iOS devices.

There are 720 ways to win running across these reels, which is an usual feature, but the innovations don’t stop there, as you also get stacked wild symbols and an exciting free spins round where it’s easy to land more bonus games over and over. You can check it out in freeplay mode on this page or join the action for real and claim winnings that can max out at 250,000.00.

Day of the Dead Setup and Controls

Despite the grim-sounding name, the Day of the Dead is a time for celebration and IGT have given this slot machine a comic style, where high-value grinning skeletons are dancing around, trying out the tasty snacks that make up some of the lower-value symbols. Anyone who hasn’t played a slot machine before might be a little put off by the unusual reel layout but really shouldn’t be, as IGT have made it as easy as possible to get started.

You play with 50 coins and just have to decide how much you want your coins to be worth, from just 0.01 each, to a maximum of 0.20. It gives an overall bet range of between 0.50 and 10.00 per spin. This means it’s aimed at lower stakes gamblers and probably not going to attract high rollers. We’ll look at a similar game where you can stake much more, at the end of this review.

Other control options include an Auto mode, which can run for up to 50 consecutive spins and of course, you have the choice of listening to the soundtrack or muting it. An energetic Mariachi band plays along as the reels spin, perfectly complimenting the action on the reels.

Click the ‘Pays’ button at the top of the game to see what each possible winning combination is worth. You collect multiples of the coin value when matching symbols land across at least three reels from the left or the right sides.

The MultiWays Xtra format means that you only need symbols on adjacent reels and the same symbol in several places on any reel will multiply the reward. It’s a great feature which has proved to be very popular across a number of IGT slot games. It’s a little complicated at first, but once you have landed a few wins, you will find that it’s a very easy concept.

Everything works in just the same way on the mobile version of this slot. Some of the finer details may be harder to see, but the bright colors, high quality animations and exciting features are all identical.

Gameplay and Features of Day of the Dead

The first thing you are likely to notice, apart from the outstanding design, is the way that the reels are set out. It’s a five reel slot, but the outer ones each have three symbols on them, the next ones inward are four symbols high and there are five symbols on the middle reel. It gives you 720 different ways to land a winning combination across them.

Because symbols like a garland of flowers, fruit bowl, pot of chili and a warm drink pay out the smaller prizes, you are likely to see these more often. Look out for the two dancing skeletons and the undead Mariachi band though, as these pay out much bigger prizes. The game logo is the most valuable symbol, but not necessarily the most useful. That honor belongs to the wild symbol, which is the slightly macabre image of three colorful coffins. This only appears on the middle three reels, but will act as all others, apart from the scatter and bonus symbols if it’s then able to complete a combination.

The scatter symbol is a colorful mask and whenever this appears in 3, 4, or 5 places at once, you win 2, 10, or 50 times the total bet. The bonus symbol is a laughing skull and you could be laughing as well when it launches 8 free spins. Now that might not seem like many to start with, but if the bonus symbol creates more than a single winning line in the triggering spin, you get 8 spins for each combination, to a maximum of 96 bonus games. If the bonus symbol appears across the reels during the round, even more spins are added on, to a potential maximum of 240.

The Verdict and an Alternative Game

Apart from the relatively low maximum stakes, the Day of the Dead slot machine is pretty much all you want from a game. It looks and sounds great, has the potential to pay out some impressive prizes and like all IGT games, it’s completely fair with a high return to players percentage. Plus, there’s the added advantage that you can find it at some highly recommended top Pennsylvania slot sites or top New Jersey slot sites, or even at land-based sites.

If you want to gamble with higher stakes, take a look at Dia de los Muertos, which is Spanish for Day of the Dead. This Oryx Gaming slot has beautifully detailed symbols across the five reels and 15 paylines. It comes with free spins, unique bonus rounds and has also got maximum stakes of 150.00, so it’s much better for high-stakes gamblers.

Check out either of these games at the top online and mobile casinos and join in the Mexican-style celebrations with a cast of creepy characters.