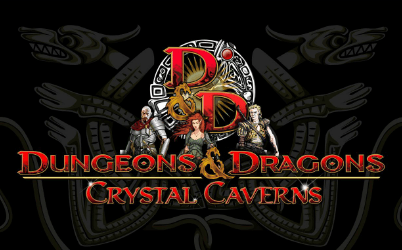 The fantasy role-playing Dungeons and Dragons game has been around since 1974 and remains a popular pastime with gamers around the world. It’s so popular that IGT has launched a series of slot machines based on these adventures, with the Dungeons and Dragons Crystal Caverns slot machine taking you on an epic quest for winning spins. Played over 5 reels, this game is online and optimized for iPhones, iPads and Android mobile devices, which has made it accessible to a huge audience.

A wide bet range that starts at just 0.20 per spin and goes all the way up to 100.00 puts it within reach of casual players, high rollers and everyone in between. There are prizes of up to 15,000.00 up for grabs when you play at real money casino sites that carry IGT games. Like all slots from International Game Technology, or IGT, it’s guaranteed for fair play and has a high return to players percentage so whatever stakes you choose, there’s a good chance that you can claim some great win multipliers when the right symbols line up for you.

There’s also plenty of potentially rewarding bonuses to enjoy, such as Tumbling Reels that can bring you win after win for a single stake, wild substitutions and free games. Unusually, the free spins play out on a different set of reels where it’s easier to win and the resulting payouts can be higher in value. It all adds up to a thrilling game that should appeal far beyond the core audience of Dungeons and Dragons fans. Read on to discover a mythical world where brave warriors. Colorful crystals and magical symbols can really heat things up.

Prepare to enter a forbidding cave, guarded by skulls when you play this slot game. The treasures within will make it all worthwhile, as colorful lower-value crystals and high-paying character symbols stop across the paylines. Like all of the slots in the Dungeons and Dragons series, the expert design brings the magic of this fantasy world to life and the whole game looks fantastic. Slick animations add to the realism of the scenery and while there are no actual 3D effects, the symbols still seem to pop out against the black background of the reels.

It’s a low volatility game, so you should see lots of winning combinations appearing, but IGT always like to add something special to their slot machines and they have a range of extra features within the Crystal Cavern. The most interesting feature is actually the one that you are going to see most often. Tumbling Reels means that rather than symbols spinning down like a normal game, in each spin all symbols drop away to replaced by a new set from above. If any winning lines are seen, the symbols in the win will vanish and any above will tumble down to fill the voids. If you are lucky, that will make up a new combination and the whole process carries on until no new winning symbols are landed. With a little luck, high-paying symbols will land, and if the game logo stops right across a payline, your reward will be equal to 150x the stake.

The Verdict on Dungeons and Dragons Crystal Caverns

If you prefer a more down to earth style, you won’t have to look far, as IGT have their Da Vinci Diamonds game available. The Tumbling Reels and free games are almost identical and it’s another 5-reel, 20-line slot that’s found at some of the top Pennsylvania slot sites or top New Jersey slot sites that we recommend.