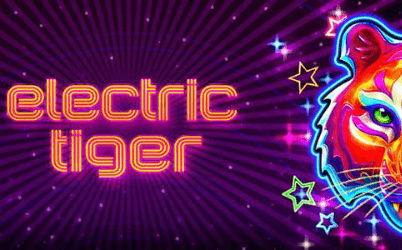 We’ve all seen classic fruit machines, where symbol of cherries, lemons, bells and watermelons are found, but most of us haven’t seen these traditional symbols turned into sparkling jewels. The diamond-encrusted symbols of the Electric Tiger slot from IGT are just one of the upgrades to the usual fruit machine style that you will find here. A funky disco-style soundtrack plays out as the five reels spin up winning combinations, helped by the high-paying Tiger which is a wild symbol that expands across reels to complete extra lines for you. But a special star symbol is the star of the show, launching a unique Gateway Bonus round that goes through several levels to the biggest wins.

Why has IGT added a Tiger to a fruit machine? We don’t know, but it looks good and adds to the distinctive design of this popular slot, which you can find online and play on both Android and iOS smartphones or tablets. The bet range starts from just 0.25 per spin for casual punters and rises to 10.00 for gamblers looking for the biggest rewards. Anyone landing the Tiger across all reels at the top stakes will take home 18,000.00 in a single spin!

If you’re ready to take on the Tiger, read on and see what’s made this game such a roaring success at IGT-powered casino sites.

Setting up the Electric Tiger Slot

International Game Technology, (IGT) are one of the oldest, biggest and best-known suppliers of slot to land-based and online sites. They always make sure that their games are easy to set up, with straightforward Plus and Minus control buttons to adjust bet levels and the option to Autospin the reels for anyone who wants to sit back as the games progress.

Other options include changing the volume of the soundtrack and of course, choosing what device to play on. Unlike many IGT slots which are only found at physical casino sites, Electric Tiger is fully compatible with desktop computers, laptops, Android devices, iPhones and iPads. The clear, crisp design and graphics ensure that it looks great on any device.

Something that’s well worth taking the time for, is reviewing the paytable, which is accessed from a tab above the reels. Electric Tiger isn’t a straightforward game, certainly once the bonuses are triggered and a read of the rules will give you a head start when you enter a special feature. The Gateway Bonus is unique to the game, but even if you haven’t checked out the paytable, once you have triggered it, on-screen instructions are there to guide you along to the big payouts that can be won in this round.

Gameplay and Features of Electric Tiger

A bright neon backdrop to the reels and symbols that sparkle as they spin down, all make this one of the most eye-catching slots you’re likely to see. It’s got an almost hypnotic style which suits the weird and wonderful theme of the game, but don’t fall under its spell just yet, as we need to look at how it works first.

In the main games, it works in just the same way as many others, paying out when enough examples of the same symbol land across any of the 15 paylines from the left side. As these dazzling pieces of fruit, bells, lucky horseshoes and clover symbols spin around, you will see bonus symbols that make the game truly special.

The Electric Tiger itself is a multicolored creature that pays a massive 120x your bet when it crosses an entire payline. It can also expand across any reel it lands on, leading to the jackpot prize of 18,000x your stake if it fills every symbol position on all five reels. This symbol also earns its stripes by being the wild, able to substitute for others if needed to complete extra winning lines for you.

Although the star symbol will only land on the middle reel, whenever you see it, one of two fantastic Gateway Bonus rounds will be awarded. Both rounds take place on a new screen where you see four wheels plus a separate Wheel of Fortune. The basic Wheel Bonus lets you spin the highest value of the four wheels for a guaranteed prize. If you get the Wheel Shot Bonus, you get to spin the first wheel, then move on to the next if the first lands on an arrow symbol.

Get through all four wheels to spin the Wheel of Fortune for a massive prize. It’s possible that one wheel will send you back down to a less-valuable wheel if an arrow points the wrong way and in theory you could have 500 ‘jumps’ between them. It’s a fun feature that adds some real excitement and tension as you move between wheels, hopefully on the way to the big money at the end.

Our Summary of Electric Tiger

This is a medium to high volatility slot game, where you could be waiting a while for winning combinations to appear, but the end results are correspondingly larger prizes. That won’t suit everyone, in which case check out the famous Neon Staxx from Netent, which has a similar style, great features and a much lower volatility.

But if you don’t mind waiting for bigger wins, take the Electric Tiger for a spin. It’s a good-looking slot, with an abstract design that really grabs your attention and a high return to players percentage of over 96%. The Gateway Bonus features can seem a bit complicated at first, but as we say, once triggered, the instructions make them very easy to understand for novice players and experienced punters alike. It’s found at some of the top real-money Pennsylvania slot sites or New Jersey slot sites, which have free bonuses waiting for you to collect when you start to play.