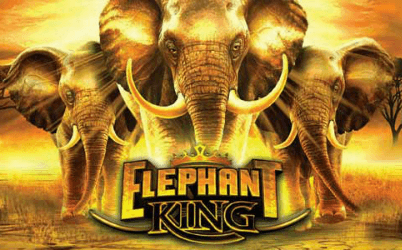 There’s a good chance that you could be claiming some mammoth wins when you spin the reels of the Elephant King slot from IGT. Available at the top New Jersey casino sites and top Pennsylvania casino sites, this 5-reel, 40-payline game is filled with majestic wildlife symbols and comes with some pretty majestic features as well.

Land Elephants in any places to claim instant prizes, while free spins with extra winning chances and the guarantee of wins in a unique Prize Disc feature have all helped this game to become a big success for IGT around the world.

Elephant King is a medium volatility slot machine that pays out steady wins and can be played from just 0.75 per spin. The maximum bet is a huge 1,500.00, so it’s suitable for most players, except those who like to spin the reels with tiny stakes. With up to 250x your total stake to claim, or 375,000.00 when you play at the max bet, it’s easy to see why this African adventure is so widely played across the world.

Check it out at some of the top casino sites which carry the IGT range and see for yourself why herds of players are stampeding to this hit slot game.

The Elephant isn’t alone as he’s joined by a virtual zoo of animals including Antelopes, Zebras and Rhinos. These are the high-paying symbols that appear on a traditional 5x3 reel layout and the playing card symbols, Hearts, Clubs, Diamonds and Spades pay out the smaller prizes.

Basic winning combinations are formed when at least three of a kind are seen across any of the 40 paylines from the left side, but the Elephant King slot packs a lot more into the reels than it first appears. We’ll cover the special features in a little while. Open up the Paytable using the button at the top of the game to see what each symbol combination is worth.

Right now, let’s look at how you set your stakes. Although this is a 40-line game, you always play with 75 coins and can value each coin at between 0.01 and 20.00 via the simple arrow buttons below the reels. The Elephant King slot gives you the option to Autospin the reels up to 50 times but there’s no Turbo mode, although you can choose the volume of the soundtrack or turn it off altogether.

The sounds of jungle drums and wildlife is perfect for the game, so we think most players will keep it turned up, but it’s a matter of preference. If you are playing on an Android or iOS device in a public place, maybe muting the volume would be advised.

Whatever device you are on, the same bet levels and exciting features, including the unique Prize Disc are all yours to enjoy, so let’s move on with our journey across the plains of Africa and see how it all works.

Gameplay and Features of Elephant King

IGT have brought the beautiful landscape of Africa to this game, setting the reels against a view of trees, grasses and a stunning sunset. The reels are framed in ornate golden columns and even the control buttons have been designed with care to match the overall style. But it’s not all just about looking good, as the features of the Elephant King slot are equally impressive.

A shield and spear wild symbol works as others if it can complete win-lines for you although it will only be seen on the middle 3 reels and can’t substitute for the symbol of an Elephant against a gold background, which only appears on reels 1, 3 and 5.

Above the main part of the game is the special Prize Disc, which sees a coin multiplier or free spins icon above each reel. These values move one reel to the left on every spin and if the symbol of the Elephant King against a gold background appears, you win whatever multiplier is above him.

These can range from 500 coins to a massive 10,000. If a free spins icon is above the Elephant King symbol, you are awarded with 10 bonus games. It’s possible for several Elephant King symbols to appear at once, in which case you win the coin multipliers above each, or 10 free games for each icon above the reels.

Different symbol payouts are found in the free spins round, with the Elephant now paying out 1,000 coins for example, not 500. Because the Prize Disc is still in play during the bonus round, you can also retrigger the free games, or claim coin multipliers during them.

Our Verdict on Elephant King

This isn’t the most straightforward slot machine to play. There’s the slight complication of wagering 75 coins across 40 paylines and the bonus features, while very lucrative, can take a bit of getting used to. But it’s these very features, plus the popular African wildlife theme, that have made the Elephant King slot such a hit.

If you want something with a similar design, but far simpler gameplay, take a trek to Mega Moolah, from the Microgaming company. A rich variety of African animals are seen across the 5 reels and 25 paylines.

A lion acts rather appropriately, as the wild symbol and it doubles the value of any line it completes, while the scatter symbol triggers 15 free spins where all wins are tripled. It sounds like a fairly standard online slot so far and indeed it is, until you trigger the multi-million Dollar progressive jackpot round.

You will find both of these games at some of the top slots sites in New Jersey and Pennsylvania, where fair gaming is guaranteed as you seek out the big game and big winnings on the reels.