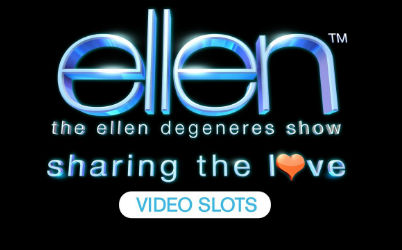 Visitors to casinos on the Vegas strip, or any other gambling center, have often never spun the reels of a slot machine before and don’t know where to start. That’s why smart developers, such as International Game Technology, or IGT as they are known, have spent fortunes gaining the licenses to popular movies, TV shows and personalities. People wandering through a casino will spot a familiar face, or show, and decide to stay in their comfort zone and play the game. It’s no big surprise therefore, to find that a slot machine based around Ellen DeGeneres is one of the biggest attractions in casinos around the world.

What could be a safer bet for IGT than basing their game on one of the biggest stars? Ellen is seen as someone whose show is watched by millions of people and is seen as a warm, friendly personality who really cares about her fans. Now this tactic wouldn’t work if the slot didn’t have some high-quality gameplay to keep people entertained, so IGT have added some standard features such as wild substitutions and free spins to the mix. But the Ellen: Sharing the Love slot game also has some unique features with direct links to the show, like a Heads-Up game, Epic or Fail round and even Cat Week is given a look-in.

This 5-reel, 40-payline game can be played for stakes as low as 0.40 per spin, which is another attraction to casual gamblers. But the important thing to note is that it’s only available at land-based casinos, not online or in a mobile compatible format. Very few online slot machines have a similar style and there are none that feature famous daytime TV hosts, but if you like the glamorous style and lots of features, then we have found an alternative that you may like.

We will take a look at this in a bit, but for now, let’s have a closer look at Ellen: Sharing the Love slot game and see what she can treat you to if you find it at a casino.

This game certainly looks great, with lots of images of Ellen across the dual screens of IGT’s CrystalCurve ULTRA slots cabinet, which envelopes players and even has a custom-built chair that’s set just in the right place to maximise the experience. The 5 reels are below a 50-inch 4K resolution display where some of the bonus features play out. It’s a game designed for low-stakes players, so you won’t be able to wager much on a spin of these reels. If you want to see how you win prizes, or how the bonuses work, just click the Paytable button and all the details will be revealed.

Like most slots in physical casinos, you don’t have many customization options, although you can auto-spin the reels and adjust the volume to suit. Wins are paid as multiples of the amount wagered on each of the 40 paylines and while playing card suits pay the smaller prizes, several versions of the Ellen show logo pay a little more and various images of Ellen herself are worth the top awards. Prizes in the base games are won by matching symbols across a line from the left side, but there are so many bonus rounds here, it won’t be long before a special feature is triggered.

Some of those features crop up at random in any spin, such as the Epic or Fail round. If this is triggered, you get to pick from options that will either win a nice prize or just a small consolation prize if you make the wrong pick. The Heads-Up feature is also linked to the Ellen show, and you can grab some big wins as extra wild symbols appear.

Cat Week pays out some decent prizes, which IGT have called ‘ meowtipliers’ and the Dancing for Dough game keeps on awarding cash as long as the dancing carries on. On top of all this, free games with win multipliers of up to 15x can be awarded, which makes Ellen: Sharing the Love one of the most feature-filled slot machines in the IGT range.

But it’s not available online, which we think is a real pity. It’s probably due to the terms of the licensing deal that IGT have with Ellen and her representatives.

Our Summary and an Online Alternative

If you like Ellen DeGeneres and don’t mind playing for small stakes, this game could have been designed just for you. It’s not going to create new fans for Ellen, but with a huge built-in fanbase, IGT will be more than happy with the number of people who will be spinning these reels at land-based casinos.

There’s no real direct comparison game available online or to play on Android and Apple-powered mobile devices. Showtime Spectacular from Live 5 Gaming is perhaps the closest you will get to the glamour and style of Ellen: Sharing the Love. It’s another slot machine that’s filled with bonus rounds and has been a huge success for this developer.

This 5-reel, 20 payline slot has performers and showgirls appearing, alongside the lower-value playing card symbols. A wild symbol helps out by acting as others, and the game logo is a scatter symbol, that pays some of the top prizes. A free spin ticket does just what it says and awards a single free spin whenever it appears.

But the star of this show is the feature trail, which lights up along the bottom of the game when numbered symbols appear. At the end of the trail is a fortune wheel, which spins up guaranteed rewards, including free spins, cash, or reels that spin until you land a winning combination. Showtime Spectacular can be played at some of the best Pennsylvania slot sites or New Jersey slot sites that we’ve found, where new player bonuses will give you the best chance of a spectacular start.