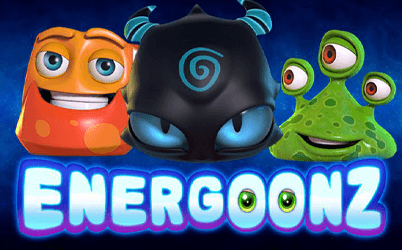 Did aliens build the Pyramids? Is the mythical planet Nibiru going to destroy humanity? We're not sure. But one thing we're certain of is that the alien action in Play'n GO's Energoonz will grab your attention, whether you give it a demo spin, or play for real money. With low volatility and 96.7% RTP, you can expect the average session to give you great value in the Energoonz online slot – especially if you're a fan of sci-fi films and staring out into space looking for little green men.

Play Energoonz For Free!
Bookmark It For Later 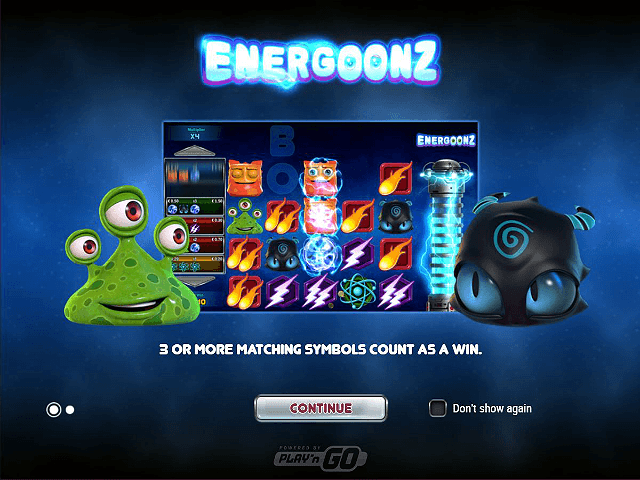 Play Free Demo
Version Directly in Your Browser
Play Energoonz For Free!
Bookmark It For Later

This cool slot game definitely offers something unique and has been thrilling in-the-know slot gamers since its release in 2013. And in their science lab of a slotscape, there's a whole genesis of quirky new alien species seemingly underway, with an array of symbols including three species of aliens and various symbols of alien DNA and genetic manipulation. There's actually some speculation about the theme of Energoonz, with some players viewing the red and orange symbol are 'fireballs' and other believing them to be 'alien sperm'. The gamescape certainly looks like a science lab designed to create new alien life or power-up the aliens, but we'll leave the rest up to your imagination.

Whatever the truth, the neon graphics are top-notch and are backed by an eerie deep space soundtrack, with the action happening across an interesting 5x5 slot grid. Spin sizes range from 0.20 to 40.00, with the potential for a vast range of payouts depending on your level. Crank up the energy collector by clicking spin and see what alien creations comes your way.

Energoonz has become something of a cult slot among gamers who like goofy sci-fi, leading to a sequel in the guise of the Reactoonz slot: two games that are highly playable via both Android and iOS devices.

Strangely, with the Energoonz online slot you can only spin using five different betting levels - 0.20, 1.00, 2.00, 10.00 and 40.00. While this means you don't have a huge range of choice over the bet size in terms on a micro level, it makes selecting a spin level very easy; it's almost like default setting ranging from beginner to pro.

One nice aspect of the betting levels, is you automatically qualify to activate every payline on the game's grid. The grid layout is an interesting feature, whatever your slot gaming experience. The 5x5 grid format creates winning combinations for three or more symbols, both vertically and horizontally, offering lots of winning opportunities. To see the full payout levels for each icon, before you spin, simply click on the 'Paytable' icon at the bottom left of the slot screen.

Energoonz's low volatility level makes it a winner for creating prolonged slot sessions that typically won't eat through your budget. Couple that with plenty of action via the base game and bonus features and you can see why it's become a popular title. In the base game, symbols and payouts deliver lots of interest, including thunderbolts, flame-like icons, atoms and three higher paying aliens. The blue-eyed ET is the best of the standard icons, paying x25 your spin for five in a row. But it's the Plazma wild that can really send you into hyper space, with x5 to x500 your bet: that means a max jackpot ranging from 100.00 to 20,000.00 depending on your level.

In addition to standard slot play, it takes a little while to fully immerse yourself in the complexity of Energoonz's mechanics - although this doesn't mean you need to learn any skills to start playing and winning. In essence, after winning spins, the payout symbols are destroyed by the electromagnetic machine hammering away to the right of the slotscape, with symbols dropping down to fill the empty spaces. If any of the new combinations are winners, you can sit back and see how aliens like to reward you with expanding win multipliers.

The multipliers can start to really boost your payouts. The more symbols you clear from the screen (via multiple wins), the bigger the potential rewards. Multipliers can rise to x10, with a bonus of x1000 if you manage to clear the screen of symbols.

As you clear away the symbols, you'll also start to see the BONUS logo appearing on the screen - like a catchphrase puzzle being revealed. Clearing the whole screen riggers the Bonus feature, giving you ten free spins on a new reel with up to ten cool aliens. The cascading reels are inactive, but you can scoop x1.25 to x75 your spin value. Matching five blue energy ball symbols will also gift you with another free spin round.

As you'd expect from a developer like Play'n Go, Energoonz is a slick slot that offers all-round gaming quality. Its cute and quirky theme will appeal to many sci-fi lovers, but if you're seeking something scary, then a better option might be something like Rival Gaming's Alien Spinvasion slot, or NetEnt's similarly named Alien slot. However, don't dismiss the UFO power behind Energoonz. And if you like this one, be sure to check out the follow-up game from Play'n Go - Reactoonz slot.