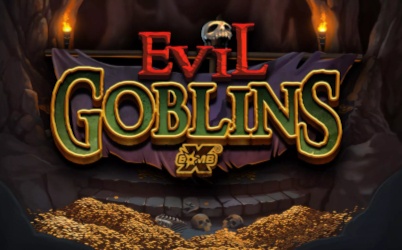 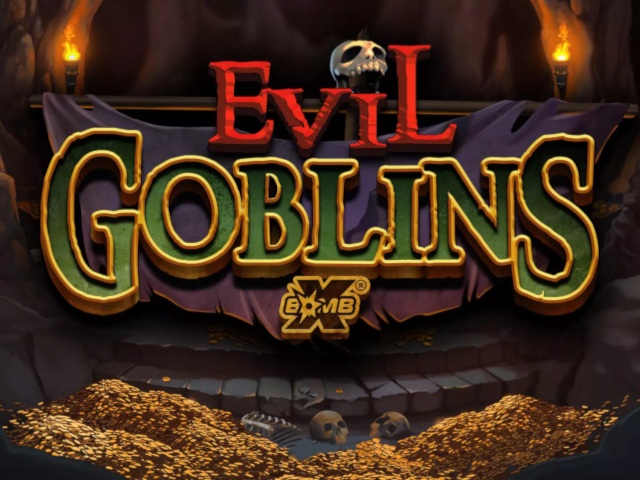 Unleash a band of cartoon critters in the Evil Goblins xBomb online slot. It comes from games developer Nolimit City and like much of their range, it’s packed full of style and innovative features. Green gremlins stalk the 6 reels of this desktop and mobile slot, along with card symbols and a rich variety of bonus emblems.

These trigger features such as cascading reels, extra wilds, multipliers, expanding reels, free games, and more. It’s all done with humour, as grinning goblins wave grenades above the reels and occasionally blow themselves up.

Evil Goblins xBomb comes with a high level of volatility and average returns of 96.14%. You can become a multi-millionaire at the highest stakes, with prizes of up to 31,969x the total wager from a Goblin King.

How to Play the Evil Goblins xBomb Slot Machine

The reels sit within a cave, lit by flaming torches, and accompanied by a lively soundtrack. Playing card suit symbols will tend to fill much of the reels, but 5 higher value goblins also appear, each with a suitably menacing grin on their cartoon faces.

Several skulls of their victims and a blood-red bonus symbol also feature on the 6 reels and initial 3 rows. Look above the reels and you encounter animated goblins above each, ready to trigger some of the explosive features with their hand grenades. It’s a hugely entertaining game that looks and sounds good on PCs, Android, Windows, and iOS-powered mobiles.

Tap the ‘$’ symbol on the controls and select from the 20 wager range options running from 0.20 to 100.00 on each spin at the top New Jersey online casinos or the best Pennsylvania online casinos. The arrow button unlocks an Autoplay feature, and the 3 small dots take you to the paytable of the Evil Goblins xBomb slot. You have 729 different ways to match symbols on adjacent reels, across any rows from left to right. Depending on how many reels he’s on, the Goblin King pays the most, with prizes ranging from 0.35x your wager to 3x.

This game is packed full of features, which ensures excitement on any spin. Winning symbols explode and those above cascade down to fill the gaps. Cascades continue for as long as they form new winning combinations.

Four animated goblins above the middle reels can help to complete wins. A new mix of characters appears on each spin and if any match with the same goblin on the reel below, he’ll throw a grenade onto the reel in a Goblin Sacrifice feature, turning the symbol into a wild skull. Skulls can act as others to complete wins, and they come in 3 versions.

Grey skulls are Dead Wild blocker symbols, that do nothing unless you land 3 or more at a time. They then transform into Resurrection wilds, with any 3, 4, or 5+ having multipliers of 11x, 33x, or 55x respectively.

A barrel of dynamite is the xBomb symbol, and this explodes to remove all standard symbols around it. It also adds a 1x multiplier to any win, while increasing the number of rows by 1, to a maximum of 7 rows with 117,649 winning ways.

Any 3 or 4 scatters will launch 8 or 9 Fresh Meat free spins, and extra wilds, exploding goblins, and xBombs will land during the games. If the xBomb lands in the triggering spin, you unlock the Explosive Fresh Meat games, with an xBomb on every spin.

Goblin Feast free spins can trigger from within the Fresh Meat games, and the Evil 4 feature is active throughout.

Evil Goblins xBomb is a high volatility game with a long-term payback percentage of 96.14%.

As you can see, this is a feature-filled game which can be slightly complex for inexperienced players. Of course, not everything happens at once, so it shouldn’t be too much for anyone who has played slots before.

What does the xBomb symbol do in the Evil Goblins xBomb slot?

The barrel of explosives symbol of the Evil Goblins xBomb slot machine appears at random. It blows up to remove all adjacent symbols apart from scatters and wilds, to trigger a cascade of those above. The xBomb also adds extra rows and a multiplier to any subsequent wins.

Does the Evil Goblins xBomb slot have any other features?

The Evil Goblins xBomb slot has multiple bonus features. These include wild multipliers, goblins that count as extra symbols, and free spins with guaranteed xBombs or wilds on each. If you like bonus rounds, it’s a great choice.

How many paylines does the Evil Goblins xBomb slot have?

Instead of fixed paylines, the Evil Goblins xBomb slot gives you 729 ways to match symbols on connected reels from the left. The number of rows and ways to win can increase to a maximum of 117,649.

What is the minimum wager per spin of the Evil Goblins xBomb slot machine?

You can play the Evil Goblins xBomb online slot for as little as 0.20 on each spin. There are several options between this and the maximum wager of 100.00, so you should easily find a level to match your budget.

How volatile is the Evil Goblins xBomb slot machine?

This is a high volatility game, so don’t be surprised if you have several losing spins in a row. Average prizes can be quite generous to compensate, and over the long term, the Evil Goblins xBomb slot returns 96.14% of wagers in prize money.

Is the Evil Goblins xBomb slot a good game?

We think the Evil Goblins xBomb is an excellent game. It features a fun cartoon style and has exciting gameplay and bonuses to keep you entertained. It’s perhaps slightly complicated for anyone with very little experience of playing slots.

What games are similar to the Evil Goblins xBomb online slot?

Games similar to the Evil Goblins xBomb slot include the Greedy Goblins slot from Betsoft and the Goblins Cave slot machine which comes from the studios of Playtech.

Can I play the Evil Goblins xBomb slot on a mobile?

Yes, you can. You can play the Evil Goblins xBomb slot machine on iPhones, iPads, Android, and Windows mobiles at some of the top-rated mobile compatible casinos featured here at gambling.com.

The Evil Goblins xBomb comes from Nolimit City and is part of a great range of slots, such as xWays Hoarder xSplit, East Coats vs West Coast, and Infectious 5. All Nolimit City games come with ingenious features.

When was the Evil Goblins xBomb slot released?

The Evil Goblins xBomb slot was launched on 12th October 2021.