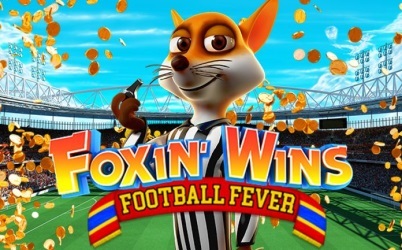 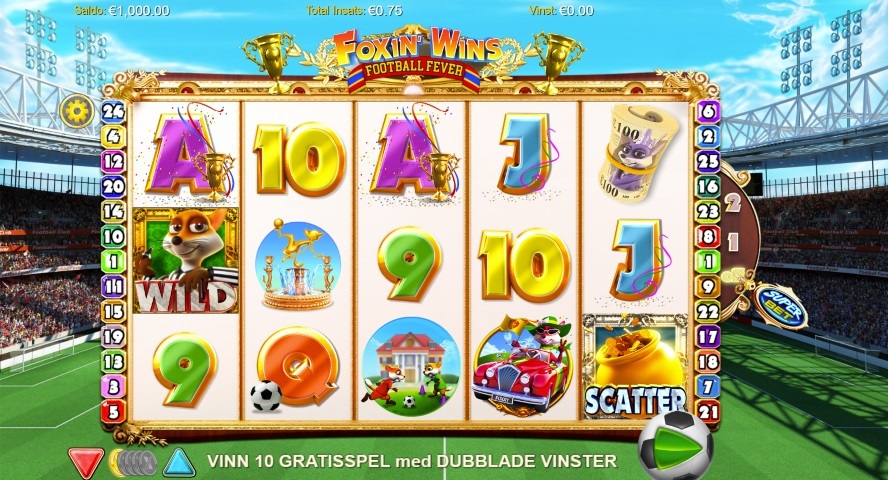 NextGen has plenty of popular slots and characters, but none are more famous than the little foxes and the way they live their luxurious life. In the Foxin’ Wins series of slots, we’ve already met Mr Fox and his wife, and then we’ve met his twin brother. In the fourth slot in the series, Foxin’ Wins Football Fever slot machine, we see all three of them. We see the twins playing football in front of their palace, and then we see them on a football field. The lady is, as always, having the time of her life, driving in her red expensive car.

Foxin’ Wins Football Fever by NextGen is similar to the other slots in the series, as it also features the SuperBet that gives you an increasing RTP, from 95.22% to 95.61%, and it offers free spins. Similarly to Foxin’ Twins, it also offers random bonus features. Sure, you’ll also have the help of the wilds and scatters to play through these bonus games, and you’ll even benefit from some multipliers. Considering it is a medium to high volatile slot, you can rest assured that the gameplay will go as smooth as possible. Plus, you can play it on any device. Is the Foxin’ Wins Football Fever getting to you yet?

You don’t need to worry about whether Foxin’ Wins Football Fever online slot functions on your mobile devices, because it was developed in HTML5 format. Therefore, you can rest assured that it will perform on any Android and iOS mobile device just perfectly. All you’ll need to do is find the cosiest spot in your home, make yourself some coffee and enjoy.

When you’re all set, it’s time to adjust the settings. The first thing you will notice on the screen, though, is that the play or spin button is presented with a football ball, and that’s a really nice detail, fitted to the theme. You’ll see that you have the option to turn off or on the sounds, and you’ll see that you can play the slot in autoplay mode. Now, you also need to decide on your total bet. There are 25 paylines in Foxin' Wins Football Fever slot and a minimum bet per line of 0.01 credits. The maximum bet per line is 25 credits. This means that the betting range can go anywhere from 0.25 to 625 credits, therefore, it will suit your budget regardless of whether you're a low or a high-roller.

And then, you have the “i” section in the settings, which is the paytable. You will see the 9 and 10 playing card symbols which give you 100 coins for a 5-of-a-kind combo. The J and Q give you 150, and the K and A 200 coins. You get 250 coins for winning combos with the dollar bills and the fountain symbols, and 500 coins for 5-of-a-kind combos with the symbol that presents the twins playing football in their front yard. The lady fox gives you 1,000 coins, and the wild symbol presented with the fox gives you 2,000 coins. The wild, as always, will substitute for all symbols except for the scatter. The scatter is the symbol with the pot filled with golden coins, which gives you 100x the stake for a 5-of-a-kind combo. The pot scatter wins are added to the payline wins.

As mentioned in the intro, Foxin’ Wins Football Fever online video slot offers the additional wager that you can place to get better payouts. The SuperBet off, which costs 25 coins, the level 1 for 35 coins and the level 2 for 50 coins, all give you different enhancements. In fact, with the SuperBet, you get the fox pup to appear on more reels. The fox pup does a special role, which is transforming regular symbols into wilds. And considering the wild plays the role of a substitute, you will find it pretty handy. Now, on the off level, the fox pup appears on the third reel only, on level 1 on the three middle reels and on level two, it appears on all reels.

Now, there are two random bonuses that you can receive, the fox funds and leprechaun shakedown. They both give you cash prizes from 2x to 50x the stake, but during leprechaun shakedown, you only get a prize if you catch the leprechaun. For the fox funds, you see the fox wearing a jersey and taking a pot with it appearing on the screen and showering you with gold coins.

And finally, you also get the free spins bonus game. You need to land three or more scatter pots in order to get 10 free spins. During the free spins, not only all prizes you get are doubled, but also the fox pups appear more often. Plus, the free spins can be retriggered!

You’ve probably noticed that Foxin’ Wins Football Fever online slot is a game that can suit any player’s budget and deliver wins that correspond to those bets. With the SuperBet functionality, high-rollers can get huge wins. Plus, the theme is fun as always, and the gameplay is thrilling because you're at the edge of your seat waiting for the random bonuses to appear.

If you’ve enjoyed Foxin’ Wins Football Fever online slot, make sure you try out Foxin’ Twins, too, as you will see the familiar characters on the reels, and you will have double fun with the twins, as they will appear on two reel sets! What’s more, they will bring you double the prizes, with a total max win potential of 250,000 credits!

But if you want to try out something new and different from the developer, you may try out Kingdom’s Edge. It has a great 3,000x the stake potential, and it features a medieval theme. The gameplay is filled with stacked wilds and scatters, in addition to free spins, multipliers and respins. You’ll have a blast playing it, that’s for sure.

Catch football (or soccer) fever and kick it with these slots at our favorite top New Jersey slots sites or top Pennsylvania slots sites.