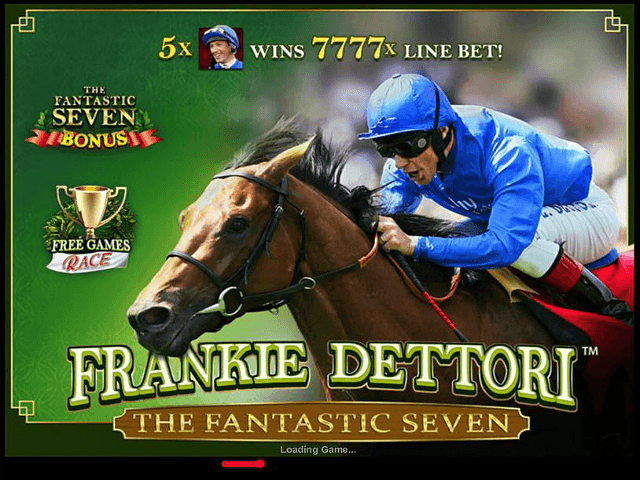 If you are a fan of horse racing, then you probably have heard of this legend. Frankie Dettori completed his most famous accolade on British Champion’s Day at Ascot in 1996 when he rode all seven winners on the card. This Playtech game, at top slots sites in New Jersey and Pennsylvania, celebrates Frankie’s big day with its traditional racing-themed graphics and exciting soundtrack, which includes galloping hooves as the reels spin. With players able to choose the amount of paylines from one right up to 25, the stakes can be as high as you want them to be.

After choosing the amount of paylines and your bet per line, it’s time to hit the turf. This is where the fun begins. You can start spinning by pressing the 'spin' button or by using the auto play feature where you can select up to 99 spins. The aim of the game is to line up three or more of the same symbols. You probably recognize this concept from any other slot game on the market. The grand prize comes in the form of five Frankie headshots. Landing this will reel in an incredible prize: a magical 7777x your stake. The same symbol acts as Wild and replaces all other symbols apart from the bonus symbols. Any of your wins can be gambled too. You will be taken to a separate screen where you must pick a higher card than the dealer’s in order to rack up those prizes even more.

With so many great bonus features and that mammoth 7777x jackpot, it’s no surprise that Magic Sevens is a runaway success. If you're looking to get in on all the action, you can find this slot game in the games lobby of Ladbrokes Casino.