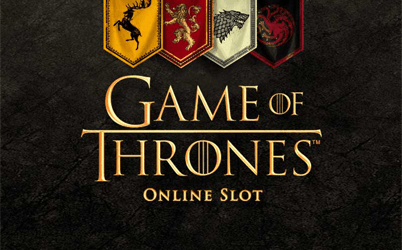 Game Provider: Microgaming
Play Game of Thrones For Free!
Bookmark It For Later
Demo Not Available, Use The Offer Below To
Play for Real Money Now!
Showing , United States
EDIT LOCATION
locale:
Loading...

It's rare that the stakes are higher than in Game of Thrones, an epic game that brings the powerful houses of the Seven Kingdoms, ruthlessly battling for control of Westeros, to the world of online slots. Set out on your very own Game of Thrones adventure by choosing which house to serve in this new slot version of the popular phenomenon. Remember, although the Baratheons award the most, a Lannister always pays his debts.

About Game of Thrones Slot Game

Game of Thrones is a five-reel slot with 15 paylines and an impressive 243 ways to win. Created by Microgaming, the game’s intricately constructed graphics will live up to fans' expectations – don’t worry, there won’t be as much blood and no one will be killed off. Its reels mirror the gold and bronze style of the intro credits to the TV series. To top it all off, the gameplay is accompanied by the majestic soundtrack (or something very close to it anyway). You can start spinning from 0.30 up to 6.00. You can bet 1-10 coins with a value of either 0.01 or 0.02. The jackpot of this medium variance slot pays out 605,000; but there are many smaller prizes to be won along the way using the 243 ways to win system.

There are several special symbols in the game, including the Wild symbol, which can appear on any reel and substitutes for all symbols, except for the Iron Throne scatter symbol. The wild is also stacked, which massively increases the potential for a big win.

The last hidden treat is fittingly speculative for the chancy world of Westeros: the Gamble Feature. After each win with the slots, players have the option to wager their winnings on the spin of a rare Braavosi coin. Each win doubles the payout, and progresses the player across a trail map of the land of Westeros, passing three-eyed ravens, direwolves and white walkers on the way, before advancing to the great dragon of Daenerys Targaryen. Do you have what it takes?