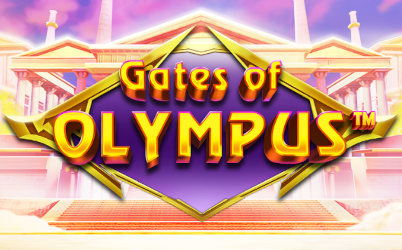 Take a journey with Pragmatic Play to the home of ancient Greek gods. The Gates of Olympus slot is a 6-reel game where you win by matching symbols in any places. It’s compatible with PCs, iOS, and Android mobiles and you can play for a wide range of stakes at some of the best online casinos.

You’ll discover rings, crowns, and an hourglass on the 6x5 grid, while lower-value symbols include sparkling gems of various shapes and sizes. The most powerful Greek god of all, Zeus, appears as a bonus symbol, and he’s also floating around behind the reels, in the mythical seat of the gods.

Winning combinations trigger a Tumbling Reels mechanism, and multiplier symbols boost wins by up to 500x! These multipliers build up over the course of a free spins bonus round, potentially leading to even greater prizes. You can win a maximum of 500,000.00 from this highly volatile game, while overall, it pays back at an average rate of 96.5%.

How to Play the Gates of Olympus Slot Machine

Both new and experienced players will enjoy the straightforward controls used here. Just click the Plus and Minus tabs either side of the Spin button to select your stakes, and with options running all the way from 0.20 to 100.00 per spin, most of us will find a perfect level at the top New Jersey and top Pennsylvania online casinos. It’s a standard setup for Pragmatic Play slots, and includes an Autoplay button that spins the reels on their own, plus an ‘I’ tab that takes you through to a paytable.

Take a look at this table to see how the unusual Pay Anywhere system works. You win from 8 or more examples of the same symbol in view at once, and it doesn’t matter where they are. The most valuable symbol is a golden crown, and this pays 50x your wager when seen in 12 or more spots at the same time. Zeus is a scatter symbol, and he’s worth 3x, 5x, and 100x if he lands in 4, 5, or 6 places.

Free Spins & Other Features of the Gates of Olympus Slots Game

Impressive animations accompany each bonus feature, with Zeus flying around the game to help you the big prizes. Winning symbols vanish and those above drop down to fill the gaps. This tumbling reels feature carries on as long as new wins are formed.

Green, blue, purple, and red rings are special multiplier symbols, and Zeus randomly adds these to the reels to boost wins by between 2x and 500x. The multipliers build up during any series of tumbles, and are added together at the end.

Any 4 or more scatter symbols will launch 15 free spins of the reels. During the round, all multiplier symbols add to a Global Multiplier that doesn’t reset at the end of any tumbles. The free games feature can be retriggered by the appearance of any 4 or more scatters, with no limit to how many times this can happen.

By combining multipliers it’s possible to win up to 5,000x your total wager, from the Gates of Olympus slots game, or 500,000.00 with 100.00 on the spin. However, it’s a high volatility slot, rated 5/5 by Pragmatic Play, so you can expect to see several losing spins in a series before landing the relatively high-value prizes. Over the long term, the payback percentage is 96.5%.

Our Gates of Olympus Slot Verdict

The Gates of Olympus online slot has plenty of colorful symbols, although we think Pragmatic Play could have added a few more ancient Greek gods to the mix. However, we can’t complain about the outstanding bonus features, with a Pay Anywhere system, tumbling reels, potential for huge multipliers, and free spins helping to ensure that it’s a thrilling game.

While it’s possible to land multipliers worth 500x, we found that 2x, 3x, or 5x is far more likely. But even these can build up significantly if you see more than one at a time, and in the free games round, they can hit huge amounts.

Enter the Gates of Olympus and play this slot at the best Pennsylvania slots sites and the top New Jersey slots sites.

Where is the best online casino to play the Gates of Olympus slot?

Read our extensive reviews of the best online casinos that carry the Gates of Olympus slot. These sites also feature the rest of the hugely popular range from Pragmatic Play, along with games from other developers, plus the best UK welcome bonus offers.

Is the Gates of Olympus slot compatible with mobiles?

You can play the Gates of Olympus slot machine on Android and Windows mobiles, as well as iPhones and iPads. There’s no difference to the style and bonus features, or to the potential for big rewards from the various bonus features.

What is the Pay Anywhere system of the Gates of Olympus slots game?

The Pay Anywhere system is an unusual feature that does away with standard paylines. Instead, you win prizes from the Gates of Olympus slot machine whenever 8 or more examples of the same symbol appear at once, and it doesn’t matter where they land.

Is the Gates of Olympus slot a high volatility game?

This is a high volatility game. It means that as a long-term average, the Gates of Olympus slot pays out less often than lower variance slots, but the prizes tend to be of a higher value. It helps to create exciting gameplay as you spin the reels for a generous payout.

What is the minimum wager on the Gates of Olympus slot machine?

You will need to wager just 0.20 per spin. That’s a wager level that suits even players with tiny budgets, while the maximum of 100.00 on each spin of the Gates of Olympus slot is designed to attract high rollers. There are lots of options in between these levels.

Do I need to download the Gates of Olympus slot?

There is no need to download the Gates of Olympus slot to play it. You access the game via a browser on PCs and mobiles, and it works smoothly and reliably even when the connection is less than perfect.

What slot symbols are on the Gates of Olympus slots game?

Diamond, triangular, and hexagonal gemstones appear along with a ring, crown, and Father of the Gods, Zeus himself. These symbols turn the Gates of Olympus slot into a colorful game, although Zeus is the only character symbol to make an appearance. Look out for colorful ring multiplier symbols.

Are there any similar games to the Gates of Olympus slot?

For a similar game with more gods on the reels, play the Age of the Gods slot from Playtech. Dramatic images of Zeus, Athena, Hercules, and Poseidon appear, with each character triggering their own special features during a free games round.

What is the RTP of the Gates of Olympus online slot?

Over the long-term, the Gates of Olympus slots game returns 96.50 for every 100.00 placed in wagers. That gives it a 96.5% Return to Players Percentage, or RTP. This is an average figure, and during any session it’s likely that you will be above or below the stated RTP.

When was the Gates of Olympus slot released?