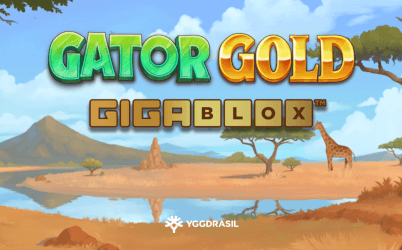 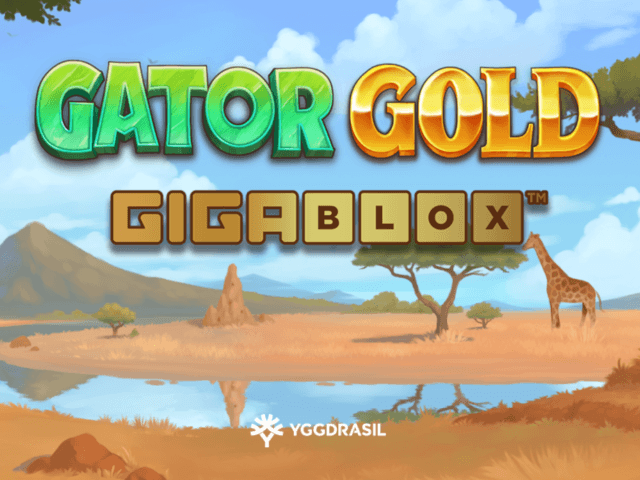 Meerkats, zebras, and wildebeest feature in the Gator Gold Gigablox online slot from Yggdrasil. This 6-reel game sees giant symbols land in every spin, filling anything from 2x2 to 4x4 blocks at once. A wild symbol joins the wild animals, and a free spins icon triggers bonus games with multiplier wilds in action.

You can play the Gator Gold Gigablox slot on PCs, iOS, Android, or Windows mobiles, and win up to 20,000x your wager. It’s a game with a high level of volatility, matched with average returns of 96%.

How to Play the Gator Gold Gigablox Slot

The colorful animal symbols and lower-value playing card emblems sit on stone-effect reels framed by wooden statues. The plains of Africa stretch out behind the game, and a lively drumbeat accompanies each spin of the reels.

The apex predator is the ‘gator itself, which snaps at you from the reels, and is a particularly impressive sight when it fills whole sections of the game.

Like most games from Yggdrasil, the Gator Gold Gigablox online slot looks good, and is designed for ease of use. You win by matching symbols across adjacent reels from the left side, and there are 4,096 different possible ways that this can happen.

Plus and Minus tabs change your wager level, with options ranging from 0.20 to 60.00 for each spin. You can trigger an automatic spins feature from the circular arrow button on the controls, and a click on the red ‘I’ tab opens up a paytable.

This has full details on how giant Gigablox symbols can make it easier to win by crossing 2, 3, or 4 reels at a time. You’ll also see how much each symbol pays, with the grinning Gator worth between 1x and 6x your wager, depending on how many reels it’s on.

Gigablox symbols land in every spin, and while a win isn’t guaranteed from these giant images, they certainly increase the odds of a prize. A wild symbol helps to complete wins by substituting for others if it lands in the right places.

The wild can’t stand in for the free spins scatter symbol though. If this appears in at least 5 spots at once, it starts a free games bonus round, with the same number of spins as triggering symbols. Each time a Free Spin symbol lands in the bonus games, it adds another spin to the round, with no maximum on how many additional games you can claim.

During the round, wild symbols come with multipliers, increasing the value of any wins they help to create by 2x or 3x. The multipliers can combine for some great prize payouts.

Wild multipliers of 3x, combined with enough Gator symbols can form winning combinations worth a vast 20,000x your wager, or 1,200,000.00 at the highest wager of 60.00. The Gator Gold Gigablox slot has a high volatility, so tends to pay out generous prizes, but less often than in lower variance slot games. The average return to players percentage of 96% is acceptable, but nothing special.

The Gigablox mechanism has become a big success for Yggdrasil, and it joins games such as Hades Gigablox and Lucky Neko Gigablox at the top online casinos. The African wildlife theme is a popular one, although the symbols used here are slightly cartoonish.

Once giant animals and playing card start dropping onto the reels, you can collect some fantastic wins. The huge 20,000x max is only really possible during the free games with the help of the 3x wild multipliers, but even in the base spin, the game can pay some big prizes.

It’s a high volatility game, so just be sure to place wagers at a level which can withstand a few losing spins in a row. Take a virtual safari with the Gator Gold Gigablox at the recommended Pennsylvania slots sites and the top New Jersey slots sites, and grab their best welcome bonus deals today.

Can I play the Gator Gold Gigablox slot at reliable online casinos?

The Gator Gold Gigablox slots game is found at some of the safest, most reliable online casinos. We only recommend sites that can prove they are fair, trusted, and fully licensed, so you don’t have to worry about anything when you play there.

What do the giant symbols do in the Gator Gold Gigablox slot?

Gigablox symbols appear on every spin. They appear in 2x2, 3x3, or 4x4 sizes, crossing 2, 3, or 4 reels at a time, which makes it more likely that they create winning combinations. Wins from this feature of the Gator Gold Gigablox online slot are not guaranteed.

Does the Gator Gold Gigablox slot machine have a free spins bonus feature?

Yes, it does! You need to land at least 5 Free Spins bonus symbol at the same time to launch this round of the Gator Gold Gigablox slots game. The number of spins is the same as the number of triggering symbols, and each Free Spin emblem landing during the feature adds a further game to the total.

How much can I win playing the Gator Gold Gigablox slots game?

Does the Gator Gold Gigablox slot work on mobiles?

You can play the Gator Gold Gigablox slot on Android and Windows smartphones and tablets, iPhones, and iPads. The controls are repositioned to make them easier for your thumbs to operate them, but apart from this there are no changes from the desktop game.

What symbols does the Gator Gold Gigablox slots game have?

The Gator Gold Gigablox online slot is themed around African wildlife. It features zebras, meerkats, and wildebeest on the reels, along with playing card symbols that pay smaller prizes than the animals. Even though it’s technically a crocodile, the ‘Gator is the highest paying symbol.

What is the return to players percentage of the Gator Gold Gigablox slots game?

Over the long term, the Gator Gold Gigablox online slot pays back 96.00 for every 100.00 placed in wagers. This is a high volatility game, so this 96% payback percentage isn’t as high as some other games. It also means that it will vary over a shorter time.

Are there any games similar to the Gator Gold Gigablox slot machine?

Similar games to the Gator Gold Gigablox slot include one of the most popular online slots ever. The Mega Moolah game features African wildlife across the reels, and it has a free spins round where wins are tripled in value. The highlight, however, is a progressive jackpot that can reach 10-15 million.

How many paylines does the Gator Gold Gigablox online slot have?

There are no conventional paylines in the Gator Gold Gigablox slot machine. Instead, you have 4,096 different ways to land symbols on connected reels from the left to win a prize. The giant symbols help out by covering several reels at once and a wild symbol can act as others if needed to bridge any gaps.

When was the Gator Gold Gigablox slot machine released?

Yggdrasil launched the Gator Gold Gigablox slot in desktop and mobile formats on 27th May 2021.