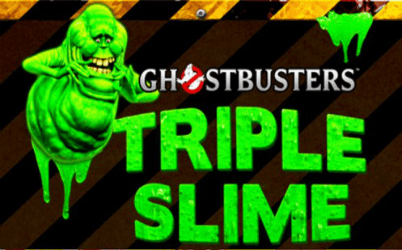 Following on from the huge success of the original Ghostbusters slot machine, IGT have now launched Ghostbusters Triple Slime, a game which has even more bustin’ action on the reels.

Based of course, on the 1984 movie and not the 2017 re-make, Ghostbusters Triple Slime sees Peter Venkman, Ray Stantz and Egon Spengler taking on Slimer the green ghost and the fearsome Stay-Puft Marshmallow Man over 5 reels. It uses the MultiWays Xtra format, which has proved to be very popular across a number of slots from IGT.

You win prizes by matching symbols from the left or right sides across the reels, but wins are multiplied if more than one example of the winning symbol is on a reel. That’s not the only exciting feature of the Ghostbusters Triple Slime slot game though.

The Slimer Scatter Bonus feature sees wheel spinning for cash awards, while the Triple Slime Bonus feature has you match ghosts with pointers for massive prizes of up to 2,919x your total stake when you play for real cash.

Ghostbusters Triple Slime can be found at some of the top online casinos and because it’s fully mobile optimized, you can play it on Android devices, iPhones and iPads. Read our review, then join the gang and see what you can win from this spooky slot game.

The MultiWays Xtra system makes it easier than ever to get started, as your bet is automatically set at 50 coins and all you need to do is decide on the coin value. If you set coins at just 0.01, your total stake per spin is 0.50 and if you go up to the maximum of 5.00 per coin, you will be staking 250.00.

There are of course, lots of options in between, making Ghostbusters Triple Slime ideal for players on just about any budget. There’s a simple on or off Auto function that sets the reels spinning on their own for up to 50 times. The annoyingly catchy Ghostbusters theme plays out, which adds nicely to the fun, although you might want to turn the volume down if you are out and about on the mobile version.

Click the Paytable tab below the game to see what each symbol is worth and how the bonus features play out. You win multiples of the coin value when matching symbols land across the reels from either side and don’t forget that wins will be multiplied if more than one winning symbol is on a reel. There’s 720 different ways that this can happen and while we haven’t personally counted them, IGT are a trusted and reliable developer with one of the best reputations in the business, so we’ll take their word for it.

The reels are covered in slime, and set against a dark New York City street, where all sorts of creepy ghosts could be waiting to jump out at you. Apart from the symbols of cast members, most of the game is in a cartoon style, with some nice animations playing out when you land a win.

Like other MultiWays Xtra slots with 720 ways to win, the reels are an uneven size, with the number of symbols in a 3, 4, 5, 4, 3 pattern. All of the symbols come straight from Ghostbusters, with the lower value one made up of ghost-finding goggles, the detector, the helmet worn by the Keymaster, and a proton pack.

The Ecto-1 car, three of the characters, (but for some reason, not Winston Zeddemore) and the Ghostbusters logo are also featured. This logo symbol pays out 200x your stake if it crosses all five reels, and more if it’s seen in multiple places on any reel.

Stay-Puft is a wild symbol who can act as any of those listed above if he then creates a winning line. He won’t be able to act as Slimer, or the group of ghosts, as these start the special bonus rounds.

The Slimer scatter feature is an on-reel bonus that sees any 3 or more Slimer symbols turn into bonus wheels, each of which spins to reveal a win multiplier. You can win up to 75x your stake if all 5 reels had Slimer landing on them. There are some cute animations as the green guy laughs and waves his arms around when the wheels spin.

However, the best feature begins when you land the symbol of 3 ghosts in 3 or more places. The Triple Slime bonus round awards prizes when you pick ghosts and they reveal pointers of the same color. This takes you to a wheel of fortune that spins up a coin win and a multiplier amount.

The Verdict on Ghostbusters Triple Slime and a Similar Slot

This medium volatility slot game is themed around a classic movie, has the popular MultiWays Xtra layout and some fun bonus rounds. Perhaps a free spins round would have been nice, as both extra features involve spinning wheels, but with guaranteed wins from each, most players won’t miss free games.

If you can’t have enough of Ghostbusting, check out the other slots in the same series from IGT. The original Ghostbusters slot machine has all the main cast as high-paying symbols, Slimer and the Library Lady are wild symbols, while the Ghostbusters logo triggers bonus rounds. Mystery in-game features can bring you multiplier awards, stacked wilds and extra wilds in a one of the most action-packed slots around.

Both of these games can be found at some of the top Pennsylvania slot sites or top New Jersey slot sites, so grab your proton pack and take on the ghouls on your desktop PC or mobile device.