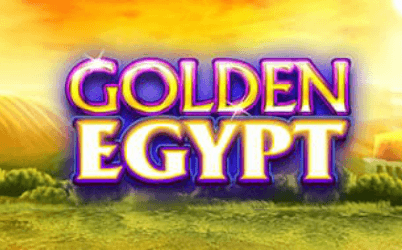 Slots themed around ancient Egypt are hugely popular and anyone who thinks otherwise is surely in de-Nile. With stunningly designed symbols of Pharaohs. Queens, Ankhs and Egyptian Gods, the Golden Egypt slot game from IGT stands out in a very competitive market.

This 5-reel, 25-line slot machine can be played on desktop computers, iPhones, iPads and Android devices at some of the hottest online casinos around. The richly decorated reels stand against the rippling waters of the Nile, with huge palaces and pyramids creating a dramatic backdrop. The Golden Egypt slot is much more than just a good-looking game though.

It’s got features such as expanding wild symbols that stick around on the reels, random stacked symbols and an amazing free spins round where you get to decide how many bonus games play out. You can spin these reels from just 0.25 or raise your stakes to a huge 500.00. Whatever bet level you choose, wins of up to 300 times your per line stake can be claimed when the ideal combination of symbols appears.

IGT are one of the top developers of casino games and have been supplying their range to land-based, online and now mobile-compatible sites for years. They have used their experience to bring you a slot machine that combines perhaps the most popular theme with some thrilling gameplay, so let’s head back to ancient Egypt and see what treasures we can uncover.

In the base games, you collect prizes from the Golden Egypt slot game in the conventional way, by matching symbols across a payline from the left side. It’s a simple system that inexperienced punters will pick up right away and more seasoned players will recognize easily. If it ain’t broke, don’t fix it, and IGT have made sure that Golden Egypt will suit players of all skills by using this system.

All you need to do is decide on a bet level, using Plus and Minus buttons to raise and lower the stakes. If 0.25 per spin is too little, and 500.00 too much, don’t worry, as there are lots of options in between.

The Paytable button at the top of the game screen reveals details of how many times the per line stake is won with each combination. It also outlines the special bonus features, such as the sticky wild symbols and free spins options, although when these features are triggered, instructions will pop up, so there’s nothing complicated about playing this game.

IGT have a habit of restricting certain slots to land-based casinos only, but we are pleased to see that Golden Egypt breaks that habit and can be played from home on mobiles and PC’s. Because the running cost of an online casino is way less than having a billion-Dollar site on the Vegas strip, you will tend to find that the return to players percentage for online slots is better. In the case of Golden Egypt, an average of 96.19% is offered, which is quite a generous payback. Unusually, no Autoplay option is available.

Gameplay and Features of Golden Egypt

A nice Egyptian-style soundtrack plays out as these richly-decorated reels spin. All of the symbols on the reels are connected to the theme, with jeweled items such as rings, beetles, and the Ankh paying out smaller wins when they cross paylines.

A royal barge, the Sphinx in all it’s ancient glory, and the Gods of Anubis and Horus will also be seen, but it’s the rulers of this land who pay out the top prizes. Land either the Queen or Pharaoh across a payline and you win 100x the line stake, while the Pharaoh’s Mask pays a huge 300x.

On each spin, one symbol will be selected at random to be stacked on any reel it lands on, making it a little easier to claim a win from it. You’ll also notice that coins are collected above the reels. Once 2 coins are in place above any reel, it will turn fully wild for the next 2 spins, helping to complete combinations by substituting for other symbols if needed.

The other symbol to look out for is the pyramid Bonus icon. If this is seen in any 3 places, you trigger the free games round. The number of free spins depends on how many Bonus symbols appeared, and before they begin, you get to pick from several options of bonus games and a number of reels that will be filled with wild symbols throughout them. Up to 90 free spins can be awarded with 5 Bonus symbols, but only 1 reel will be wild during the round, or you could choose just 15 free games, but 3 reels will be wild.

It’s an amazing feature that can bring in win after win when you play for real money. Here’s a little hint – go for the maximum number of wild reels, even if the number of free spins is reduced. That way, you are virtually certain to land winning combinations.

Our Summary of Golden Egypt and an Alternative Game

If you are one of the many fans of ancient Egyptian style slots, then be sure to play Golden Egypt, as it’s one of the best-looking games around. The fact that it comes with such exciting features is another reason to try it out at our recommended top Pennsylvania slot sites or top New Jersey slot sites. This is a medium volatility game, so you should get plenty of winning spins for your wagers.

The list of slots with a similar style is huge, but among the most popular is IGT’s very own Sphinx Wild, where wild symbols expand across adjacent reels and you can trigger a huge number of free spins.