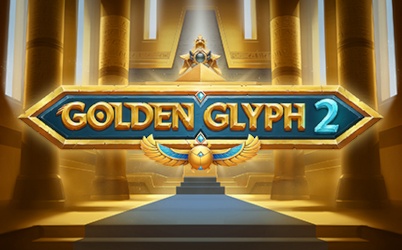 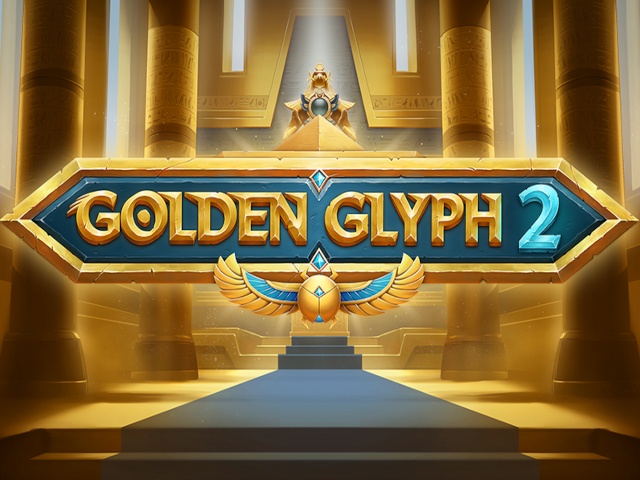 Take a virtual trip back in time, to the land of pyramids and pharaohs with the Golden Glyph 2 online slot from Slot Games developer Quickspin. This medium to high volatility game comes in desktop and mobile versions and plays out across a 7x7 grid of Egyptian-themed symbols.

It’s a cluster pays game with cascading reels, and special Power Up symbols. These activate modifiers such as giant wilds, extra wild symbols, and symbols removals. During a free games feature, wild multipliers combine their powers to award wins of up to 26,800x your wager!

How to Play the Golden Glyph 2 Slot Machine

Camels wander across hot desert sands next to the reels of the Golden Glyph 2 slots game. Ancient obelisks stand guard over the gold-framed symbols grid, and an orchestral soundtrack plays out as the symbols drop into place. You’ll see serpents, pharaohs, the ankh, and Egyptian gods among the many symbols on the screen. Look below, where a horizontal reel holds various modifier symbols and moves with every spin.

The Golden Glyph 2 slots game looks good on iOS, Windows, and Android mobiles, while the bigger screens of PCs capture the finer details of this colorful game.

The standard set of controls used across much of the Quickspin range also feature here. You click the 3 little coins on the panel, then select a wager option from 0.20 to 100.00 per spin, which is enough of a range to encompass most budgets. The hurricane-shaped button speeds up the gameplay and the double arrows in a circle trigger Auto mode that runs for as long as you decide.

The paytable reveals how much you win when clusters of 5 or more matched symbols land on the grid. It also has further details on the multiple bonuses. Falcon-headed Horus is the most valuable symbol, at between 1x and 150x your wager, depending on how many examples appear in clusters at once.

Free Spins & Other Features of the Golden Glyph 2 Online Slot

On top of all this, a progressive win multiplier increases by 1x for any tumble, to a maximum of 50x. However, multiple wilds in a win combine their values, potentially forming combinations worth a massive 29,500x your wager.

Fans of the ancient Egyptian theme will love the Golden Glyph 2 slot for its looks, but everyone can appreciate the feature-filled gameplay. Tumbles on every win, and the chance to unlock random wilds and further tumbles ensure that the base games keep the thrills coming.

It gets even more exciting when you enter the free spins round, with giant wilds, roaming wild symbols and ever-increasing multipliers helping you towards that massive 26,800x jackpot. Explore the emblems of Egypt when you play the Golden Glyph 2 slot machine at the top New Jersey online casinos or the best Pennsylvania online casinos.

Where can I play the Golden Glyph 2 slots game?

The Golden Glyph 2 slot is found at some of the best online and mobile casinos. The sites recommended here at gambling.com roll out the virtual red carpet, with generous welcome bonus deals available to their newest players.

How do I win money from the Golden Glyphs 2 slot machine?

Can I play the Golden Glyph 2 slot on a mobile?

The Golden Glyph 2 slot machine is fully compatible with iPhones, iPads, Android, and Windows mobiles and tablets. It’s been designed from the start for mobiles, and works equally well on desktop platforms.

What is the maximum win from the Golden Glyph 2 online slot?

What is the Tumble feature of the Golden Glyph 2 slot machine?

Any symbols in a win will vanish from the reels of the Golden Glyph 2 slots game. This leaves gaps and any symbols above drop down to fill them. New symbols appear from the top and if you form new winning clusters, you get further Tumbles of the reels.

Are there any games similar to the Golden Glyph 2 slot?

Fans of Egyptian-themed games have plenty of choice. Slots similar to the Golden Glyph 2 include Vault of Anubis from Red Tiger Gaming, and Golden Osiris, by Play’n GO. Of course, the original Golden Glyph online slot is still available.

What is the average return to players percentage of the Golden Glyph 2 slots game?

Taken as along term, theoretical figure, the return to players percentage of the Golden Glyph 2 slot machine is 96.09%. For every 100.00 wager on the game, it pays back £96.09 in prize money, but that will vary considerably over a shorter period of time.

Why is the Golden Glyphs 2 slot so popular?

The ancient Egyptian style, exciting bonus features, and potential to land a vast prize have all combined to make the Golden Glyph 2 slot machine a big success. It’s the sequel to an equally popular game, so has a ready-made base of players waiting to enjoy it.

The Golden Glyph 2 slot comes from Quickspin. This developer is behind many of the biggest slots games, including Sticky Bandits, Sakura Fortune, and Hammer of Vulcan. Players can enjoy these and many more at the best casino sites.

When was the Golden Glyph 2 slot released?