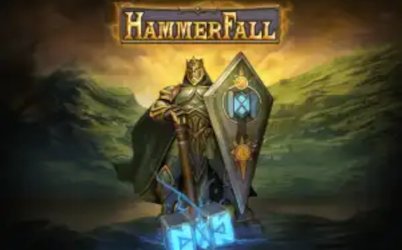 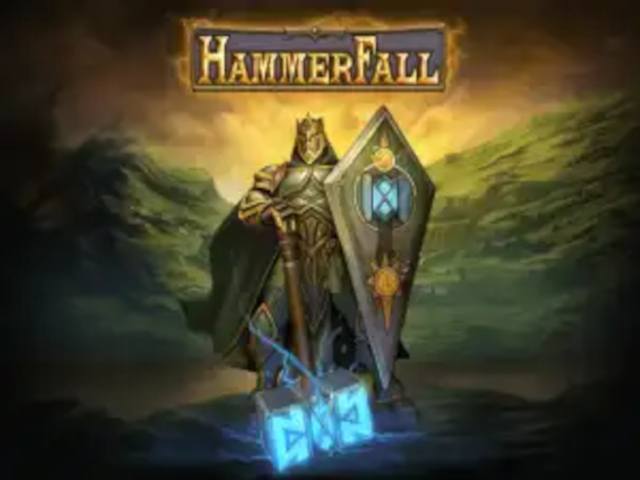 The HammerFall online slot is a desktop and mobile game based around a Swedish power metal band and their music. It’s the work of local developer, Play'n GO and is one of many rock-themed slots in their range. HammerFall plays out on a 7x7 grid of jewel-like symbols, overseen by the band mascot, Hector.

It’s a cluster pays game with cascading symbols. Fill a meter with enough winning symbols to unleash features, such as giant wilds, symbol transformations, and the removal of all low-value symbols.

Sticky wild multipliers, and symbol destructions are among the other rewards from this highly volatile game. There’s an average return to players percentage of 96.2%, and the potential to claim vast wins of 30,000x your total wager.

How to Play the HammerFall Slots Game

Unusually for a slot themed around celebrities, the band members don’t actually feature here. But the armour-clad Hector stands in front of his castle to one side of the reels, and the HammerFall logo is a special wild symbol which can act as others to complete wins.

Other symbols consist of colorful gems, with higher value ones wrapped in gold. Fans will be pleased to hear several HammerFall songs playing out from their PCs, Android, Windows, or iOS mobiles.

The user-friendly Play’n GO controls feature in this game, and you choose a wager level from the bar beneath the 7x7 symbol grid. Stakes can run from 0.20 to 100.00 per spin, so it’s a game for everyone, from casual players to high rollers at the top New Jersey online casinos or the best Pennsylvania online casinos.

An automatic spins feature triggers with a click on the arrows in a circle button, and the ‘I’ button takes you to the HammerFall slot paytable. This is a cluster pays game, where you need to land groups of 5 or more of the same symbol horizontally, vertically, or in blocks to win.

Cascades and Other HammerFall Slot Features

Symbols in a win vanish from the grid and those above drop down to fill the empty spaces. New symbols appear from above, and if you create winning clusters from the cascade, the process repeats, with no upper limit.

All symbols in a win charge a Hammer Meter to the right side of the game. Once you have 25 symbols in the meter from a single sequence of cascades, they trigger 1 of 3 special modifiers, which play out in a set sequence as follows –

The Twilight Princess feature places a 2x2 or 3x3 wild symbol on the grid.

In the Second to None bonus, all higher value symbols transform into a single type.

All lower value symbols vanish from the game in the And Yet I Smile feature.

If you see 50 or more winning symbols in a series of cascades, all 3 modifiers activate at the same time.

These features are all named after HammerFall song titles, and you get a blast of each tune as the bonus plays out. You also move through different ‘Worlds’ after any of these features, with some dramatic landscapes changing the view each time.

Other tunes play out when random features trigger on losing spins.

The Never Forgive feature sees all examples of one symbol pulled towards each other, destroying any in their path to trigger a cascade.

In the Bring it On modifier, all examples of a high paying symbol transform into the same type, or get destroyed.

The Chain of Command feature transforms or destroys a random series of symbols.

Trigger the One Against The World bonus to see all symbols adjacent to a randomly selected symbol destroyed.

On top of all this, the HammerFall slot has randomly placed Super Tile spots in each spin. If any Super Tile spot is part of a win, a wild symbol appears and sticks in place, with a multiplier of up to 3x if it’s involved in further wins.

Despite the lack of a free spins bonus round, HammerFall is a thrilling slot, packed with extras. It’s relatively easy to collect 25 symbols in a series of cascades to trigger a feature, and we found that random bonus occurred quite often.

If you like the band, it’s the ideal game. If power metal isn’t your thing, mute it, and enjoy the fast-paced gameplay and numerous features. Be sure to collect the best casino bonus deals when you join the best Pennsylvania and the best New Jersey slots sites to play the HammerFall slots game.

How much can I win playing the HammerFall online slot?

The maximum possible prize from the HammerFall slots game is equal to 30,000x your total wager. If you have the highest stake of 100.00 on the triggering spin, you would win a massive payout of 3,000,000.00. Even at lower wager levels, it still adds up to a big potential win.

What is the HammerFall slot themed around?

It’s themed around a Swedish metal band. HammerFall formed in 1993 and several songs in their back catalogue feature in the game. Even some of the bonus features are named after their tunes. The band mascot, Hector appears, and their logo is a wild symbol.

What is the cascading symbols feature of the HammerFall slots game?

Symbols in a winning cluster vanish from the reels of the HammerFall slot machine. This leaves empty spaces for new ones to drop down into, which can form new clusters. Symbols keep cascading for as long as you get new wins, and there’s no limit to how many can play out.

Does the HammerFall slot have a free spins feature?

Unlike most games, there’s no free spins round in the HammerFall slot machine. But you won’t have time to miss them, as it’s filled with numerous other bonuses, such as giant wilds, sticky wilds with multipliers, symbol transformations, and more.

Is the HammerFall slots game optimized for mobiles?

Yes, it is. You can enjoy all of the same features, style and potential wins from the mobile version of HammerFall as you get from the desktop game. Some of the controls are moved around to make it easier for thumbs to reach, but that’s the only real difference.

What is the volatility of the HammerFall slot machine?

HammerFall is a high volatility slot. It means that when compared to others, it can pay out less often, but average prize values tend to be higher to compensate. High volatility slots are seen as more exciting than low variance games which pay regular, but smaller prizes.

Are there any games similar to the HammerFall online slot?

Play’n GO have several rock-themed games in their range. Slots similar to HammerFall include Twisted Sister, Saxon, and Testament. Each game is filled with extra features, tunes from the various bands, and can be played on PCs or mobiles.

Can I play the HammerFall slots game for free?

Join our recommended Play’n GO sites and you can claim generous welcome bonuses, so you can play the HammerFall slot using their bonus money.

Who develops the HammerFall slot machine?

When was the HammerFall online slot released?

Play’n GO launched the HammerFall slot machine on 6th May 2021.